Kade Johnson is not your typical 11 year old as he dedicates a good portion of his life to the sport of motocross - whether it be fitness training, nutrition, physical therapy, or traveling to races. On the contrary, Johnson is also not your typical bLU cRU amateur motocross competitor as he attends public school and has received outstanding accolades in both education and community service.

Last year, he received “The Golden Eagle Award” for straight A’s the entire school year, a community service award for raising money for The Children’s Miracle Network, and he even finds extra time to participate on his school basketball team. His strict fitness routine which involves weight training, yoga, mountain biking, and running has helped him to accumulate a total of 31 AMA titles over the course of his blossoming MX career and he has shown absolutely no signs of slowing down. In addition to his training program off the bike, the young phenom spends time training under the direction of the 2015 AMSOIL Arenacross Champion, Kyle Regal, at Quick’s Moto Ranch in Kemp, Texas. In June of 2018, he was the first rider to win an AMA number one plate on the brand new Yamaha YZ65 and would’ve collected more trophies throughout the season if it wasn’t for an injury at the Loretta Lynn Amateur National Motocross Championship. The young Texan spent seven months off the bike rehabbing his injured shoulder and returned at the beginning of the season for all of the high-profile amateur races at the beginning of the season, winning a handful of titles throughout the springtime, as well as a number one plate at the Supercross Futures in Houston. The Yamaha rider is aiming to get redemption this year at Loretta Lynn’s Ranch on the YZ65 as he’s set to contest both the 65cc (10-11) Limited class and the highly competitive 65cc (7-11) division. We caught up with Johnson to chat about rehabbing his injury and being off the bike for seven months, his time in the broadcast booth on Race Day Live, and how his year’s gone thus far.

You had a lot of time off the bike after getting injured last year, how was the injury rehab and overcoming the adversity approaching this year?

Yeah, I got injured at Loretta’s last year and I did a lot of physical therapy, a lot of work on the shoulder. Mentally it was really hard for me because I couldn’t ride and everyone else was getting better on their dirt bikes while I was just staying the same. Since I hurt my arm, I did mainly leg exercises and when I did arm exercises I just went slow, I did a lot of mountain biking, and weight lifting with my legs. We started with just one or two-pound weights when it came to lifting with the shoulder I injured and we gradually went up as my shoulder healed. By the time I was nearly on the bike, I was lifting a good ten or fifteen pounds for most of those exercises. I used to run and I’d ace bandage my arm to my chest so I could run and I did a lot of mountain biking.

Are you a big fan of mountain biking?

Yeah, my dad is in professional mountain biking so it’s kind of natural to always be riding because he wants to ride. So I kind of go out there and ride -- I find it entertaining because it’s pretty much like dirt bikes except on the uphill you have to propel the bike.

You had some exceptional results at the beginning of the season with titles at the Daytona RCSX, Spring A Ding Ding, The JS7 Freestone Spring Championship, and the FMF California Classic. Talk a little bit about the year so far from your perspective.

Yeah, I got back on the bike in January so I had about a month to get ready for the spring nationals. I didn’t know what to expect and it was kind of a shot in the dark, because I haven’t really raced any of those fast kids and I’ve been off the bike for such a long time. I was pretty happy for my results at Daytona, Spring A Ding Ding, Freestone, and Cal Classic for how long I’d been off.

How long were you off the bike in total?

I was off the bike for seven months.

Was that the longest you’ve gone without riding since you’ve started?

Yeah, my second longest is only three weeks when I broke my collarbone.

You have a unique situation where you ride and train at Underground MX, the location of Spring A Ding Ding. What’s it like to go there and ride a high caliber race after training at the same facility?

The past two years that they’ve had it, the organization, the track, and everything has just been amazing. It’s kind of cool to have a little local feeling knowing that I train there for three-ish months to train for Loretta’s. It’s a really good track; it has amazing soil and I like everything about it.

Do you do kind of do a boot camp when you’re there to get ready for Loretta’s? What’s your typical training schedule like when you’re on the bike?

Well, in the summer it’s generally Monday through Thursday from 9 am to 1 or 2-ish, but I’m still in school for the winters so I can only ride two to three days a week, most of the time about two days.

You’re in a unique position where you’re a top-level amateur motocross racer, but you still attend public school. How is it balancing those two things?

Yeah, my mom and dad are really big into education so I can’t do full-time training like most of my competitors to constantly ride at training facilities. Although I get a lot less seat time, I feel like I push it harder whenever I am on the bike.

Do you like the experience of going to public school?

I would like doing that like once a week or so. The right answer is yes, but I don’t really like school like every other kid. I like seeing my friends and teachers and learning new things, but it just kind of gets boring every once in a while.

Following Freestone, you did the Supercross Futures at your local race in Houston. How was that experience?

Yeah, that was a lot of fun. Whenever I had to interview for Team Dunlop, it was really cool to see that perspective in the pits of all the pros. The track didn’t change that much for Sunday, they just toned some stuff down, and so it was really fun riding the same track that the pros were riding. I got to see the best of the best like (Cooper) Webb, (Ken) Roczen, and all those top guys on the same track that I was riding, so that was cool for sure.

The guys were impressed with your composure up there, do you think you’ve got a future in the broadcast booth after you’re done racing?

I mean, it matters what’s open but I’ll be okay with being an announcer. It’s a pretty cool job; I’d get to go to all the races and get paid well doing it.

After that you won some titles at the Cal Classic, how do you like going to that race and how did the race go this year?

A lot of the fastest kids in the country are out in California, so it felt pretty good to go out to their home track and win two championships. It’s always really cool because there’s a beach and anything that you really want and I get to train with Wil Hahn a little bit while I’m out there and all the Star Racing Yamaha guys.

Do you like training with those guys and switching things up a little bit about there?

Yeah, Star Racing is the professional team so they train all the pro dudes, so it’s cool getting most of the same advice as the pros get and applying it to what I do.

Ty Masterpool and Justin Cooper have really scored some impressive results in the Pro Motocross series this year. How’s it been watching their success as those were guys you saw not that long ago in amateurs that are now successful on the Star Racing Yamaha team?

Yeah, for sure. There’s (Justin) Cooper, Colt (Nichols), Ty Masterpool, and all those guys are the best of the best and they all ride Yamaha. All those super-fast guys are there, so it’s nice to know that I’m riding the same bike that they are, and for the most part, I’m on the same team as them. It’s nice knowing that if I keep it up I might be where they are someday.

Is it difficult for you to split time between the 65cc class and the 85cc class at the same event?

Yeah, a little bit. One thing that I love about Yamahas 85 is that it’s pretty much like a senior 65 with a bunch of power and a lot of suspension. It’s not that much bigger, but it has everything that an 85 should have so it makes it easier to go from the 65 to the 85 and get the same training that the riders who just purely ride 85s do. I’m a little more comfortable on the 85, but it’s pretty similar.

Last year at Mammoth you got the first big AMA win for the YZ65, do you like the track and the experience of going to Mammoth?

It’s kind of a track where if you’re faster than someone, you’re pretty much going to win. There’s not a lot of ruts so pretty much no one goes down that often and it really evens things out. If you’re not super fast, then you might not like it. The thing that I don’t like about it is that it’s chilly! It’s summertime, but it’s cold. This year is going to be the first year ever that we’re flying in, so we might see some sights instead of spending like three days driving.

What’re your plans for the remainder of the year following Loretta’s? Are you planning on moving up to the 85 full-time?

It all depends on how much I grow. I’m doing Loretta’s for sure on the 65 and then afterward it depends on how comfortable I am. If I’m kind of comfortable on it then I’ll go to Mini Os and be done with it and get on the 85 only, because I feel like get the same amount of practice right now because the bikes are so similar. 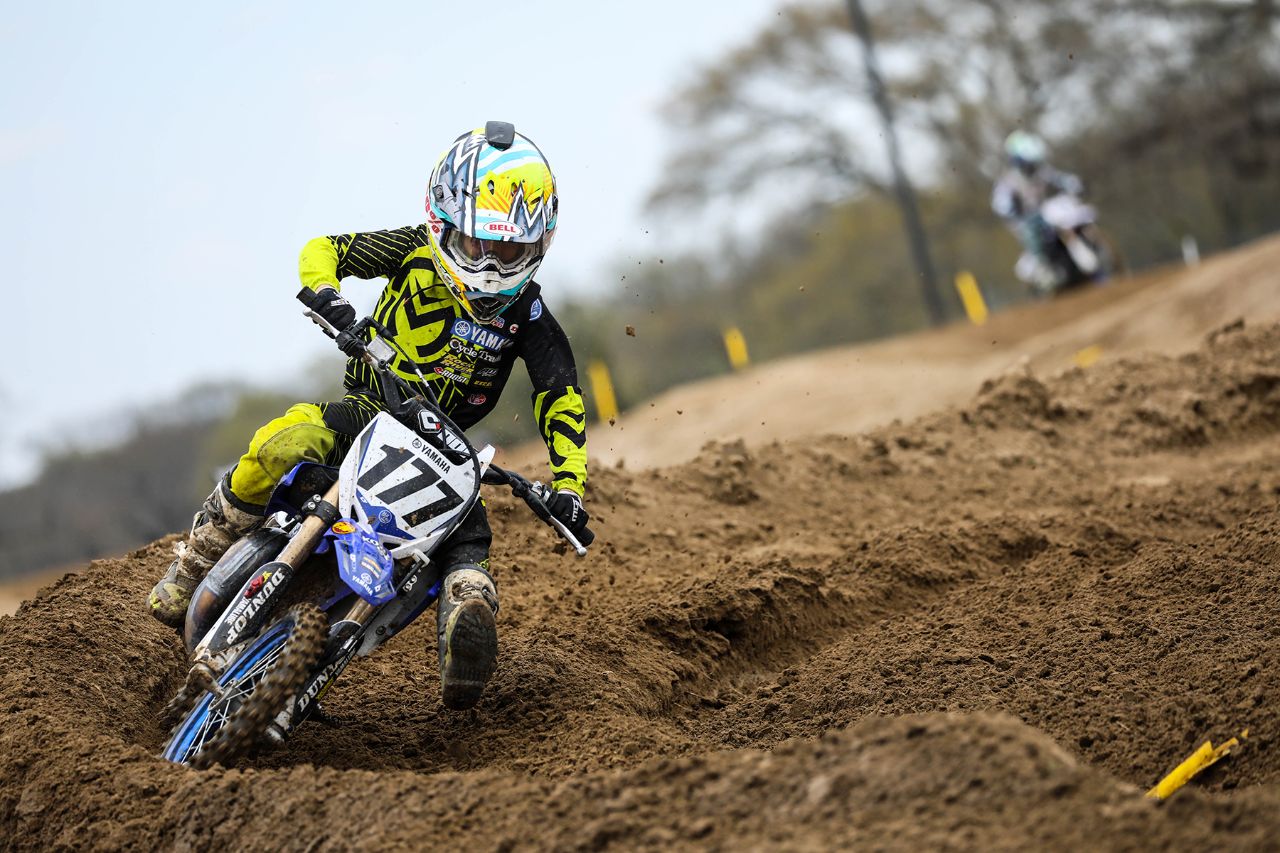