Following his third career title at the Loretta Lynn National Championship, Matthew LeBlanc made the highly anticipated bLU cRU move to the Monster Energy Star Yamaha Racing team towards the end of 2017. It was immediately clear that he had found a successful pairing as he won a title at the Motoplayground Race at Ponca City and consistently finished on the podium in all of his classes at Mini O’s.

Unfortunately, a neck injury derailed the beginning of his 2018 season but LeBlanc returned to action unfazed, completing the road to Loretta’s as well as competing at JuniorMotoX and Mammoth Motocross. He made his way back to the podium at the Loretta Lynn Amateur National Championship and has since shifted more focus to training on the west coast, sharing a training program with the professional riders on the Star Yamaha Racing team under the direction of Gareth Swanepoel. Another minor injury affected the end of the 2018 season, but when LeBlanc got back to full fitness and began riding again, he was surprised by Star Racing’s own Bobby Regan presenting him with a fresh YZ250F one day at the practice track.

It was a slow transition to the bigger bike for LeBlanc, but he has proven throughout the 2019 season that it was the right one as his speed and results have improved from the very first gate drop of the season. The Louisiana native locked down a multitude of podium finishes at the first few high profile races of the season, finishing directly behind his Yamaha teammate Jarrett Frye at Daytona and Freestone. He took another step in the right direction at the FMF Cal Classic event. LeBlanc’s speed and starts were dialed in at Fox Raceway and he managed to beat his teammate straight up on two different occasions, taking a couple of moto wins as he found a huge confidence boost in Pala. He suffered a crash and endured a minor setback where he had to spend about a month off of the bike, but he’s back on his regular program as of now and on the road to get qualified for Loretta’s. We took some time to get together with LeBlanc and check in on how his 2019 season has been, how he feels back on the bike, and how things are coming along with the Monster Energy Star Yamaha YZ250F.

At the start of the 2019 season, did you have a chance to get your feet wet in any of the Supercross Futures races?

No, there’s no point since you can’t get points or anything in the B class, but I was at a couple of races in California to support the pro team and hang out at the races.

How were Daytona and Freestone from your perspective this year?

I was really pumped with my finishes at Daytona and Freestone because I didn’t think I’d do that well, but at the same time I was kind of disappointed because I didn’t get a title. I mean, it was definitely a lot better than it was supposed to go. From the practice track I was decent, but didn’t look the best and then Daytona came around and I was running the same speed as (Jarrett) Frye, so it really opened up everyone’s eyes and it pretty much changed everything.

Did it do a lot for your confidence showing yourself that you’re capable of running that speed and give you a boost in your riding heading back to California?

It gave me a boost, but I’m going to be honest – I’m not really the practice guy. On practice days I’ll be three or four seconds off per lap and then the race will be that weekend and I’ll be the same speed or faster, so I don’t know what it is, but it’s just a different mindset on race weekends. I do the best that I can in practice to get my form right, work on breaking points and everything – that’s pretty much all you can do.

Did you bulk up a little bit more once you started to get more time on the 250 or is it just additional seat time that has helped you out so much?

The past two years I’ve really grown a lot and I started riding 125s, that’s when I really started getting bigger all around. Then I got hurt and when I started riding again, Bobby Regan called the guys that were bringing me to the track and told them to slide a 250F in there when I was still on the 125, so that’s kind of how that started. Since that day I haven’t touched anything besides the 250F.

Did you have any idea or was that a complete surprise?

I had no clue. On the way to the track, Bobby called me and said “Yeah, you’re riding the 250F today” and I was like “Oh, Jeez.” He had to call me so I could tell my mom otherwise she would’ve been mad at the team. (laughs)

How was the first ride?

Yeah, the first day I don’t even think I hit full throttle, there’s just so much speed. I was coming off a two-stroke, so the first week or so we were just trying to decide if we should stick with it, because I was scared of the power it had. Then I eventually came around and it’s working out really well right now.

Two of your Star Yamaha Racing teammates that you’ve seen come through amateurs all the way to the pros, Ty Masterpool and Justin Cooper, have really scored some impressive results in the Pro Motocross series this year. How’s it been watching their success when that’s where you’re slated to be in a couple of years?

As soon as Bobby Regan came and talked to me about joining the team, the first thing that really caught my eye was that everyone on the team has had good finishes. The team is just an all-around great team and now seeing everyone come up through the amateur ranks and go pro… I don’t think Ty hasn’t done worse than a top 15, which with the depth of the class this year is really good.

What’s it like being able to have the opportunity to train and ride with established professionals such as Colt Nichols, Justin Cooper, Mitchell Oldenburg, and Dylan Ferrandis?

It’s definitely a big benefit working with them. I’m going right down the same path that Aaron [Plessinger] and Cooper Webb went. At such a young age, I’m doing pretty much the same thing that they’re doing. So by the time that I’m pro, I’m going to be ready. I’m not going to have to take steps, I’m already going to be there and it’s not going to take time for me. It’s definitely cool to think about how lucky I am to already be there, starting to work with those guys. It’s really cool and we always have a good time. I’ll be doing something and I think that I’m doing fine and well, and then they’ll tell me something that will make me go “Woah, that’s a big difference.” Just reading off the stuff that they do makes my riding that much better, it’s definitely pretty cool.

The YZ250F is such a good stock bike to begin with, what’re some of your favorite characteristics that you first noticed with the bike?

Yeah, the first thing that I noticed when I got on Yamahas was just that the handling was so good and I could control the bikes so well – pretty much just the handling and power is just insane.

You’ve made the move to California with the team full-time now, what’s your favorite track that you ride out there on a typical training day?

Definitely Fox Raceway, to me that’s the only decent track in California. If they say we’re going somewhere else besides Pala, it’s not going to be a good day.

Well, that brings us to the Cal Classic which was at that facility. Your speed was really good there all weekend, but you had a little minor setback with a crash. There were some highs and lows for you, but definitely a lot of positives to take away from the race.

Yeah, the Cal Classic was the best race of the season for me so far and the biggest confidence booster ever. I went in and knew that I could beat Stilez (Robertson) and maybe run somewhere around Jarrett. All weekend I was just right behind him and then I finally got the start on him; he was behind me the whole moto and I just beat him straight up. After that I thought I could really do this and I beat him the next moto again. It was just a huge confidence booster, so that’s probably the best race for me so far.

They changed the rules a little bit with the B class running twenty-minute motos this year, did that one feel like a thirty plus two?

The whole moto had gone by and with him being right behind me I was just waiting for that halfway marker or anything. I think it was like two laps to go and my body was done, but I just went all-out the last two laps and gave it everything to stay right there. It was tough.

What do you think of the track changes that they made for the National at Fox Raceway?

I actually rode the track like two or three days ago and it’s kind of the same. The difference from a normal track from a professional track on how they prep it is insane. 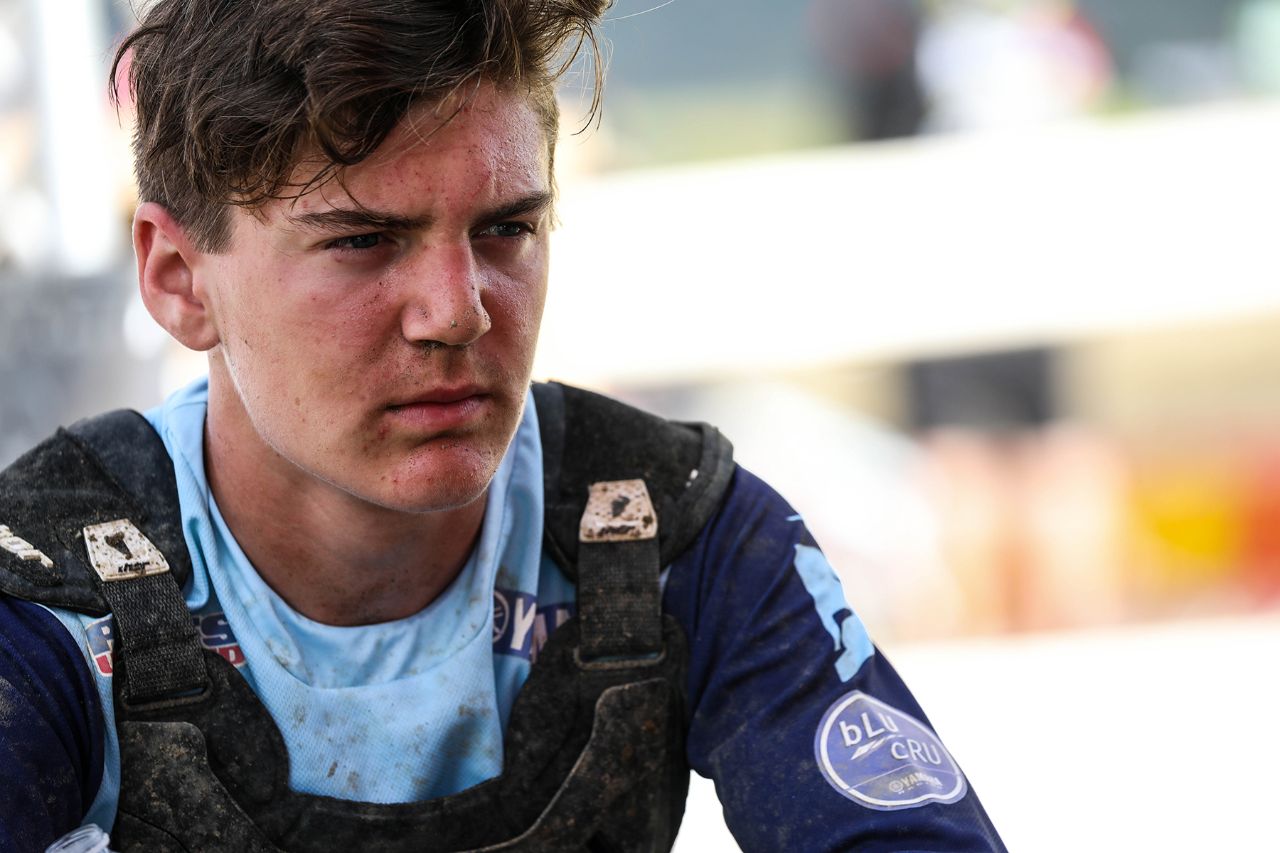