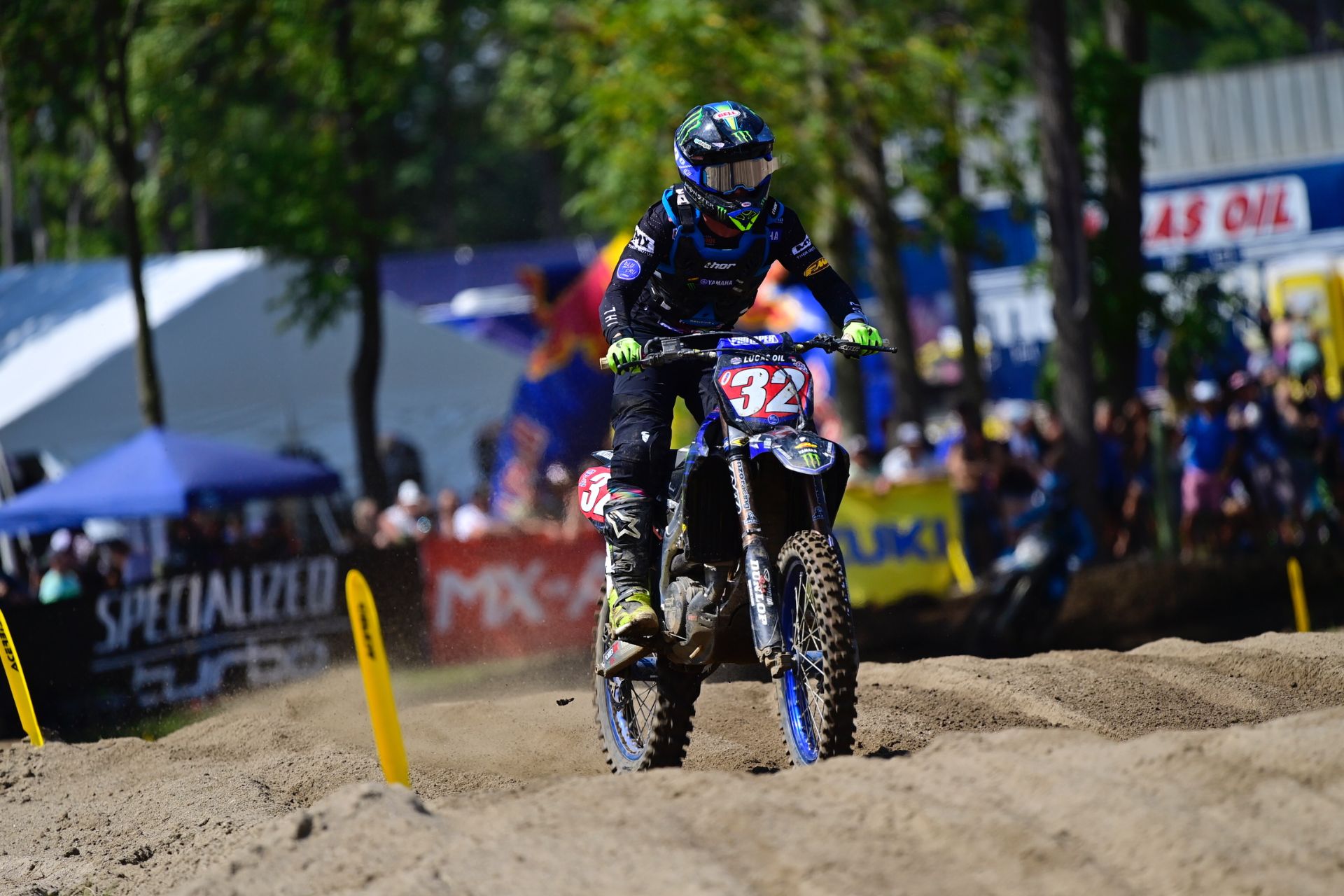 Cooper got off to a great start in the first moto, grabbing his 10th holeshot of the season. He tried to build a gap, but his championship rival was right behind him. The New Yorker held off his advances but was shuffled to second on Lap 4 and then was passed by his teammate Martin three laps later. He kept pushing in the punishing heat and humidity and ultimately crossed the line fourth. In the second moto, he was fourth after the start and quickly advanced to third. Cooper started to reel in the rider in the runner-up spot with 21 minutes left on the clock, but it was another tough moto in the challenging conditions, and he was shuffled to fourth after the halfway mark. Cooper managed his race to maintain the position and secure third overall, earning his 10th overall podium of the season. He now heads into the penultimate round trailing the leader by 11 points.

Frye had a tough start to the first moto and had a tip over in the first turn. The Maryland rider rejoined the race and worked his way from the back of the field to 15th. He rebounded in Moto 2 with a much better start in eighth. He was shuffled a couple of positions a few laps later but kept pushing to hold onto that top-10 finish for 12th overall.

Kitchen was 14th after the first lap in the first moto and quickly went to work to make his way forward. He was riding in eighth but unfortunately had a tip-over before the halfway point. He rejoined in 14th and made his way back through to 11th. The 2021 Nicky Hayden AMA Motocross Horizon Award winner got a much better start in the second moto and was sixth after the opening lap. He moved into the top five on Lap 4 but unfortunately had an issue a couple of laps later and ultimately withdrew from the race. He was credited with 35th and ended the day 16th overall.

Martin had a good start inside of the top five. He put his head down and closed the gap to Cooper. After he passed his teammate, he dropped the hammer and was the only 250 rider to break the two-minute lap time, setting the fastest laps of the race on back-to-back laps around the halfway point. Right on the heels of Cooper’s title rival, he put on the pressure and had a couple of looks but then crashed out of the race on Lap 11. Unfortunately, the Minnesotan broke his arm and will be sidelined from the final two rounds to focus on returning to full fitness for the 2022 season.

The Monster Energy Star Yamaha Racing team heads back west to Pala, California, for the penultimate round of the Lucas Oil Pro Motocross Championship on September 4 at Fox Raceway.

“First of all, I’m really bummed for Jeremy. I really think that it was his day for the win, so that was a really unfortunate incident, and he will be out for the season. I’m really bummed about that, but fortunately, he’s in good hands and will come back strong next year.

“It was just a tough day for us as a whole. Justin just didn’t have it today, but this championship is far from over. We have four motos left, and he just needs to come out swinging at these last two rounds to get this thing done. Both Levi and Jarrett were riding really well. It was just unfortunate that they had some things that set them back from riding to their full potential.”

“It was a rough one for sure. I didn’t feel like myself all day and just struggled to keep the pace with the front guys. We’re going to keep fighting and keep digging. This thing isn’t over until the last moto.”

“It was not the day I wanted. I went down on the start in Moto 1 and had to come from the back and was only able to make it to 15th. The second moto was much better. I got a decent start and finished 10th. We have two rounds left, so I’m going to give it all I’ve got.”

“Well, Ironman didn’t go as well as it could’ve, but at the end of the day, I’m happy with my speed. We’re going to keep working and get ready for Pala. I’m ready to rebound next weekend!”

“It’s just a bummer for sure. I felt that I had the pace for the win, but that’s racing. We’re going to heal up and shift our focus to 2022.”