Monster Energy Star Yamaha Racing’s Justin Cooper won the Monster Energy AMA Supercross 250SX West season opener for the second year running. Although not the traditional Anaheim I, Saturday’s victory at Camping World Stadium in Orlando, Florida, was a great start to his title campaign on a night of challenging conditions. Nate Thrasher had a solid debut in the class, ending the night 11th. His fellow rookie Jarrett Frye was also off to a good start but ultimately recorded a 19th place finish after going down in the whoops. Unfortunately for Jeremy Martin, his night ended early with a crash on the Main Event’s opening lap.

Cooper got off to a flying start, topping both qualifying sessions to take the fastest qualifier honors. He didn’t get off the gate as he wanted to in his heat and had to work his way from sixth to second. The New Yorker remedied that for the race that counted, getting a good start before the red flag and then grabbed the holeshot after the restart. Cooper built a comfortable gap to cross the line nearly five seconds ahead of the competition for his second career victory in the class. It was a stellar first round for the New Yorker who is still not 100% due to a training injury to his foot.

The two rookies showed a lot of promise in their series debut, both making the Main Event despite the challenges of the slick, hard-packed track. Thrasher got off to a great start in his heat race, but went down in the rush to the first turn and had to go through the LCQ, where he finished second. In the Main Event, the 19-year-old rode a smart race and made improvements throughout the 15-minute-plus-one-lap race to work his way from 19th to 11th at the finish line.

Frye finished ninth in his heat to qualify for the main. Like his teammate, he was nearly at back after the start in 18th, but he steadily pushed his way forward. Five laps in Frye made his way to 12th and was looking to keep his forward progress until a crash in the whoops on Lap 13 forced him to retire early with something stuck in his rear wheel.

Martin showed strength straight away with an emphatic win in his heat race. The two-time 250MX Champion aimed to repeat that in the Main Event but got caught up in an incident with another rider in the first rhythm section and was landed on. Shortly after, the race was red-flagged due to another downed rider, but Martin was unable to rejoin. The Minnesotan went to seek medical evaluation and a further update will follow.

The Monster Energy Star Yamaha Racing 250SX West team gets a weekend off before the second round of the championship at Daytona International Speedway in Daytona Beach, Florida on Saturday, March 6.

“It was a bit bittersweet losing J Mart (Jeremy Martin) like that. I’m really happy for Justin getting a win. It was definitely awesome for the team. Nate got some great experience tonight. Jarrett was up there for a while. He just made a mistake and got something caught in the rear wheel and was unable to finish. We’ll just keep fighting. I’m just hoping Jeremy is all right. He’s getting checked out and we’ll know more later.”

“It feels awesome to get the win. That’s definitely the way you want to start the series. I had a foot injury coming in, so I was a little bit nervous about that, not having enough time on the bike, but it all started out well. I was fastest in all of the practice sessions. I just didn’t have my starts down. We didn’t really practice too many of those at home, so that was a struggle until the Main Event. Luckily, we pulled it off twice, so I’d say they came around at the right time.

“It was good to get out of this place safe. There’s always a lot of hype around the season opener. You don’t really want to throw away the championship at the first round. I got myself in a good position where I could ride my own race and was able to take it easy to the finish line. It was a pretty perfect night for me. I’m excited to keep building on tonight and getting stronger since I didn’t have much time to prep for this round.  I want to be on the podium every weekend and do the best I can. I’m glad to have a weekend off before Daytona. We can definitely work on some things to be a little bit stronger heading into the second round now.”

“It was good first supercross. We had some good qualifying times and came out swinging with a good start in the heat race. I almost had the holeshot but just got tangled up and went down there in the first turn. So I had to go through the LCQ and just rode smart to put it in the main. Then we just clicked away laps. I had really good endurance and got better every lap. That’s the goal. We ended up 11th, so that’s not bad for a rough night. We’ll just keep getting better every weekend.” 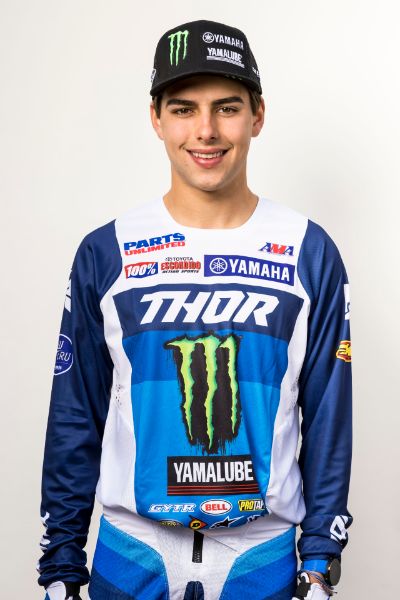 “My first supercross race didn’t really go to plan. I made it in the main but kind of struggled all day to find a flow with the track being so hard-packed. Then in the main, somewhere a little over halfway, I made a mistake in the whoops, went down, and got some stuff tangled in my wheel that cost me the race. It was a tough day, but we’re going to go back to work and come back at Daytona.”