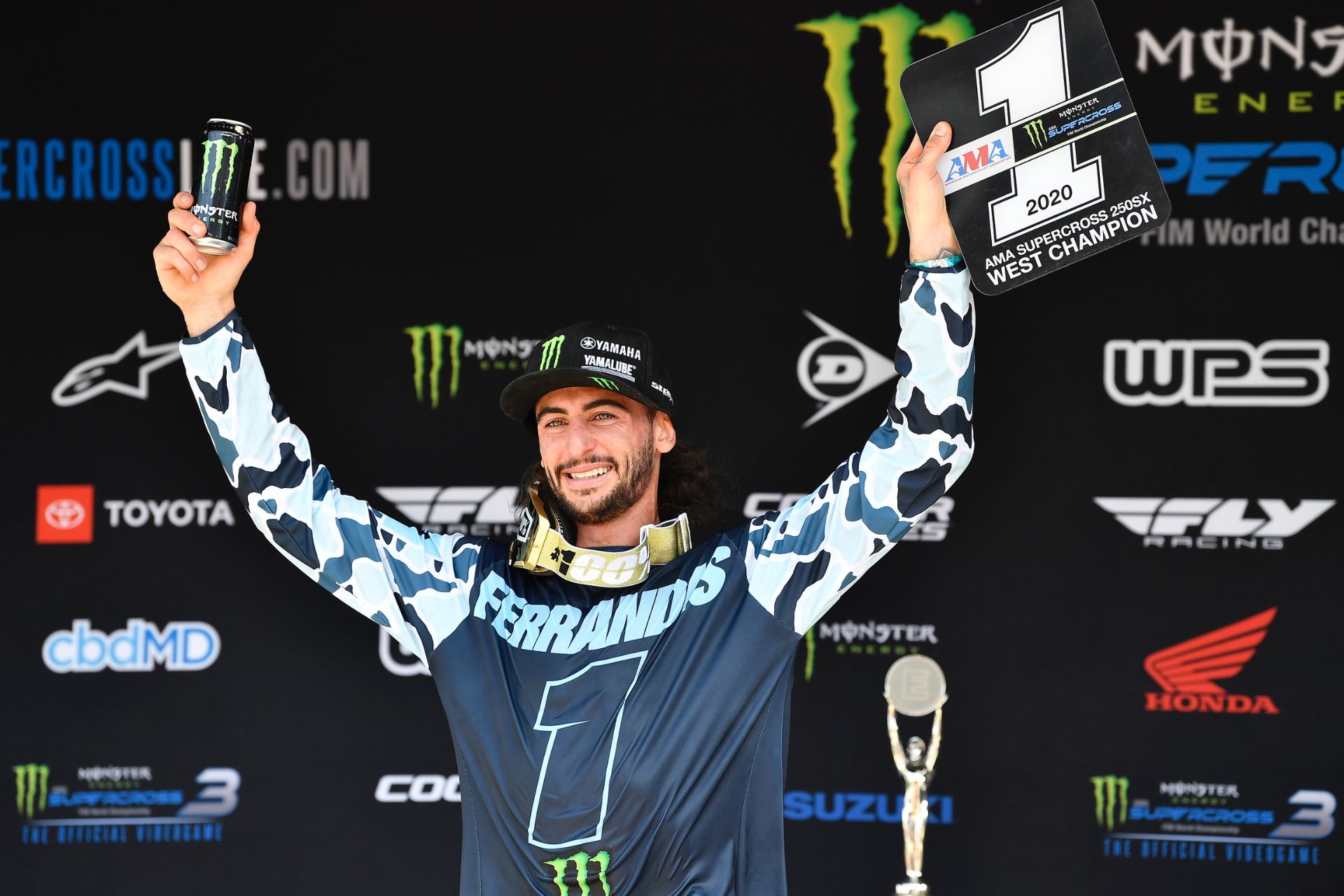 Dylan Ferrandis overcame challenges to finish fourth at the East-West Showdown and secure the 250SX West Championship for the second year running at Sunday’s Monster Energy AMA Supercross season finale at Rice-Eccles Stadium in Salt Lake City. It was a roller coaster day for the Monster Energy Star Yamaha Racing team as whole with Shane McElrath finishing second, but coming short of the 250SX East title. Justin Cooper crossed the line seventh and Colt Nichols was unable to start due to a crash in his Heat race that sidelined him for the Main Event.

It was fireworks from the start even before the East-West Showdown began. McElrath found himself into the tough blocks and over the bars after an incident on the practice start in the 250SX East qualifying. He ultimately ended the session in third behind his teammate Nichols in second. In the Western Regional class, Ferrandis not only topped his class but set the fastest 250SX time overall, with Cooper qualifying fourth.

Things really heated up in the regional Heat races. The East started the night and it was Nichols getting the holeshot with his teammate McElrath behind him. With the title on the line, the North Carolinian quickly made his move to the front. In the final moments of the race, the leader in the Eastern Regional class, Chase Sexton, made his move to take second and landed on Nichols coming out of the triple into the right hander. They both went down and the Monster Energy Star Yamaha Racing rider rejoined the race to take the last transfer spot in ninth, but was unable to start the Main with a hand injury. The Oklahoman plans to get further evaluation when they get home.

In the 250SX West Heat, Cooper took the lead early and held it all the way to the checkered flag. Behind him, Ferrandis found himself on the ground after the start in turn two. He rejoined the race but had his work cut out for him in 18th. The defending champ pushed forward but was just short of the transfer spot in 10th. Ferrandis has never had to race an LCQ in supercross before, but with the title on the line the Frenchman took the all-important win.

The drama continued in the Showdown Main Event. McElrath bagged the holeshot and started to build a gap on the competition while his title rival was farther back in eighth. Ferrandis got a decent start considering his less than ideal gate pick, but unfortunately for Cooper a rider cross-jumped him early in the race, putting him onto the ground. Then Austin Forkner went down hard, which brought out the red flag and called for a complete restart, erasing McElrath’s four-second lead. It turned out to be a repeat of Round 7 for the North Carolinian and he was unable to get another holeshot and rebuild his lead after the restart. Sitting in second, he made an attempt to pass the leader but was blocked and his rival was able to move past them both. McElrath quickly retook second and the championship contenders exchanged positions a few laps later, but McElrath ultimately had to settle for the runner-up spot and second in the 250SX East standings.

As for Ferrandis, with Forkner unable to restart and Cooper behind him, he just had to finish the race. There were some hectic moments, but the champ got the job done with a fourth-place finish to score his second title before he moves on to the 450SX class next year. His teammate Cooper recovered from that first lap crash before the restart and managed a seventh place finish to end the year second in the 250SX West Standings.

The Monster Energy Star Yamaha Racing team now shifts its focus to the Lucas Oil Pro Motocross Championship which kicks off on July 18 for the Ironman National in Crawfordsville, Indiana.

“It was a great night for us with Dylan taking back-to-back titles in the 250SX West Championship! Shane gave us his all, but just came up short. It was a crazy night with a lot going on with guys fighting for wins and the championship. I’m happy for our team. It was a solid season for our guys. Now we move on to the Outdoors and look to bring home the championship there.”

“I’m pretty pumped about the way I ended this season even though I had a very difficult day. It was the most difficult day of my life. There was so much emotion today after having to win the LCQ. I’ve never had to race an LCQ in my four years of supercross and to have to come through today with the championship on the line, that was tough. I secured my championship in the Main to get back-to-back 250SX West titles. It is more than a dream come true. Thanks to my team, my wife and my trainer DV (David Vuillemin). I’m so happy!”

“I’m pretty disappointed that I didn’t get the championship this year, but since I’ve been on this team I’ve learned so much and grown so much as a person and a rider. I’m learning from my mistakes and looking forward to moving on to the Outdoors.”

“It was a pretty good day until the Main. A rider cross jumped me and put me on the ground pretty hard. On the restart I didn’t get a good start and I just kind of rode the race out. I didn’t really have it in me after the crash. I’m going to put it all behind me. I’m excited for the Outdoors!”

“The day was going well and then I got together with Chase (Sexton) in the Heat race. I just misjudged how close he actually was to me and he was already committed to what he was doing. He ended up landing on my hand and got me a little beat up. I’m going to get it checked out and hopefully will be all good.” 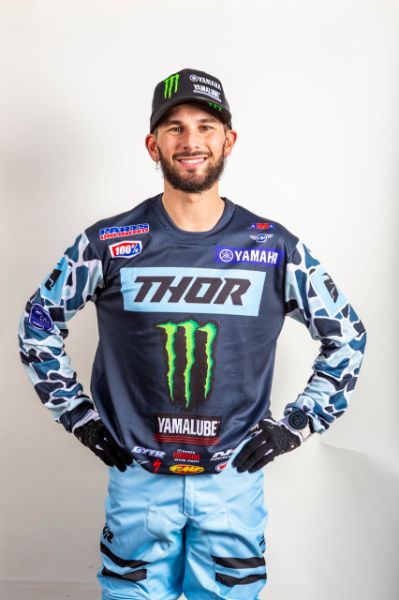 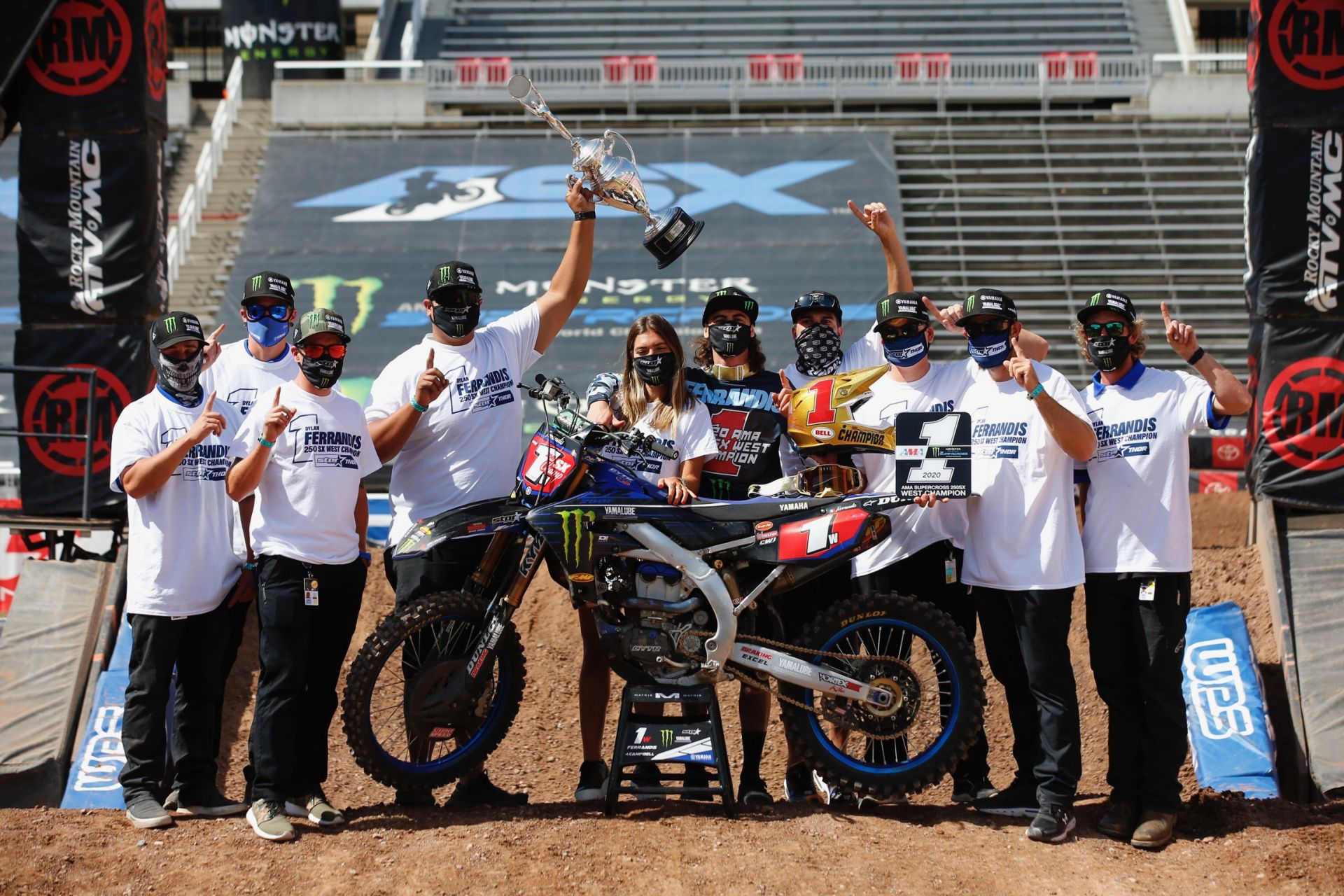