Martin Battles to First Podium of the Season in Arlington Martin Battles to First Podium of the Season in Arlington

Monster Energy Yamaha Star Racing’s Jeremy Martin showcased a never-quit attitude last night to take a runner-up finish with 9-2-3 main event scores at the Monster Energy AMA Supercross Triple Crown in Arlington, Texas. His result moved him up to third overall in the 250SX East Championship standings. Levi Kitchen had a good start to the night, but unfortunately, his night ended early with a crash in the first race.

Monster Energy Yamaha Star Racing’s Jeremy Martin showcased a never-quit attitude last night to take a runner-up finish with 9-2-3 main event scores at the Monster Energy AMA Supercross three-race format Triple Crown in Arlington, Texas. His result moved him up to third overall in the 250SX East Championship standings. Levi Kitchen had a good start to the day, but unfortunately, his night ended early with a crash in the first race.

The track at the AT&T Stadium was very challenging and required the riders to be on top of their game every single time they hit the track. Martin used all the practice time he had to dial in his YZ250F, and it worked - qualifying fourth overall. The opening main event saw Martin face an uphill battle as he went down due to another rider going down in front of him and was dead last. Knowing there were two additional races, he focused on passing as many riders as he could, eventually making it up to ninth.

The second main event went much smoother for Martin, who quickly made his way into second on the third lap and kept the leader honest for the entire 10 minutes plus one lap race. The final race of the night saw Martin sixth after the first lap and was putting in a great pace to move forward but went down on Lap 6, pushing him back to ninth. He didn’t quit and used the second half of the race to pick off riders in front of him and closed out the night in third. When all three races were totaled up, Martin’s hard work paid off to finish second overall.

Kitchen was faced with the first Triple Crown event of his career in Arlington and managed to learn the tricky track quickly to qualify in fifth. He was able to avoid the downed riders on the opening lap of the first main event, starting the race in fifth. The rookie was running strong between sixth and seventh for much of the race, but in the final minute he came together with another rider and went down. Feeling banged up after the crash, he sat out of the remaining two races to focus on the next round in Daytona.

“An eventful night in Arlington left us with mixed emotions. The day started off slow, with both guys feeling a little uncomfortable in the first qualifying practice, but thanks to our staff, we got them looking great and qualifying inside the top five. In the first main, Jeremy found himself on the ground in the second turn, but he fought back to a respectable ninth place. Levi was fighting for a top-five finish when he came together with another rider and crashed. After being evaluated by the Alpinestar Medical crew, we decided to sit out the rest of the night. Levi will have a week of recovery and hopefully be healthy to race Daytona.

“In the second main event, Jeremy got a top-five start and went to work, fighting his way to a second-place finish. Going into the final main, Jeremy was sitting pretty good with a possibility to end up on the podium and, once again, got a top-five start. He dug deep, kept pushing forward despite a tip-over, and finished second overall. It was a great end to the night for Jeremy, and we’re happy to be in the fight for the Championship. With Jeremy being an outdoor specialist, we are excited to see what he can do next weekend.”

“It was a bit of a rough day, to be honest. I think I was ninth in the first free practice, but I kept getting better every session. The team worked very hard, and I let them take the lead on some stuff with suspension, and it really paid off tonight. I got off to a decent start in the first race of the triple crown, but I had nowhere to go when a rider went down in front of me, and I had to make my way from last to ninth. The second one was better, and I finished second, just behind Jett (Lawrence). In the third race, I was ready to see what we could do to finish out the night. I went to make a pass and hit the guy in front of me and went down in front of the mechanics' area. I got back up and kept pushing and was able to make it to third in that race for second overall. It feels good to get on the podium. We’ll keep working on getting to the top spot.” “It was a tough first Triple Crown for me, but that’s racing. I’m going to rest up this week and hopefully line back up next weekend in Daytona.” 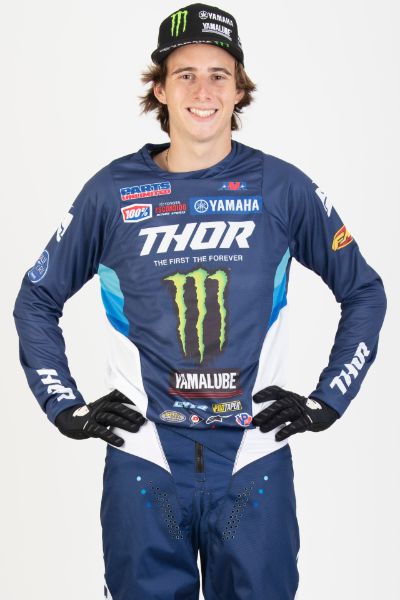