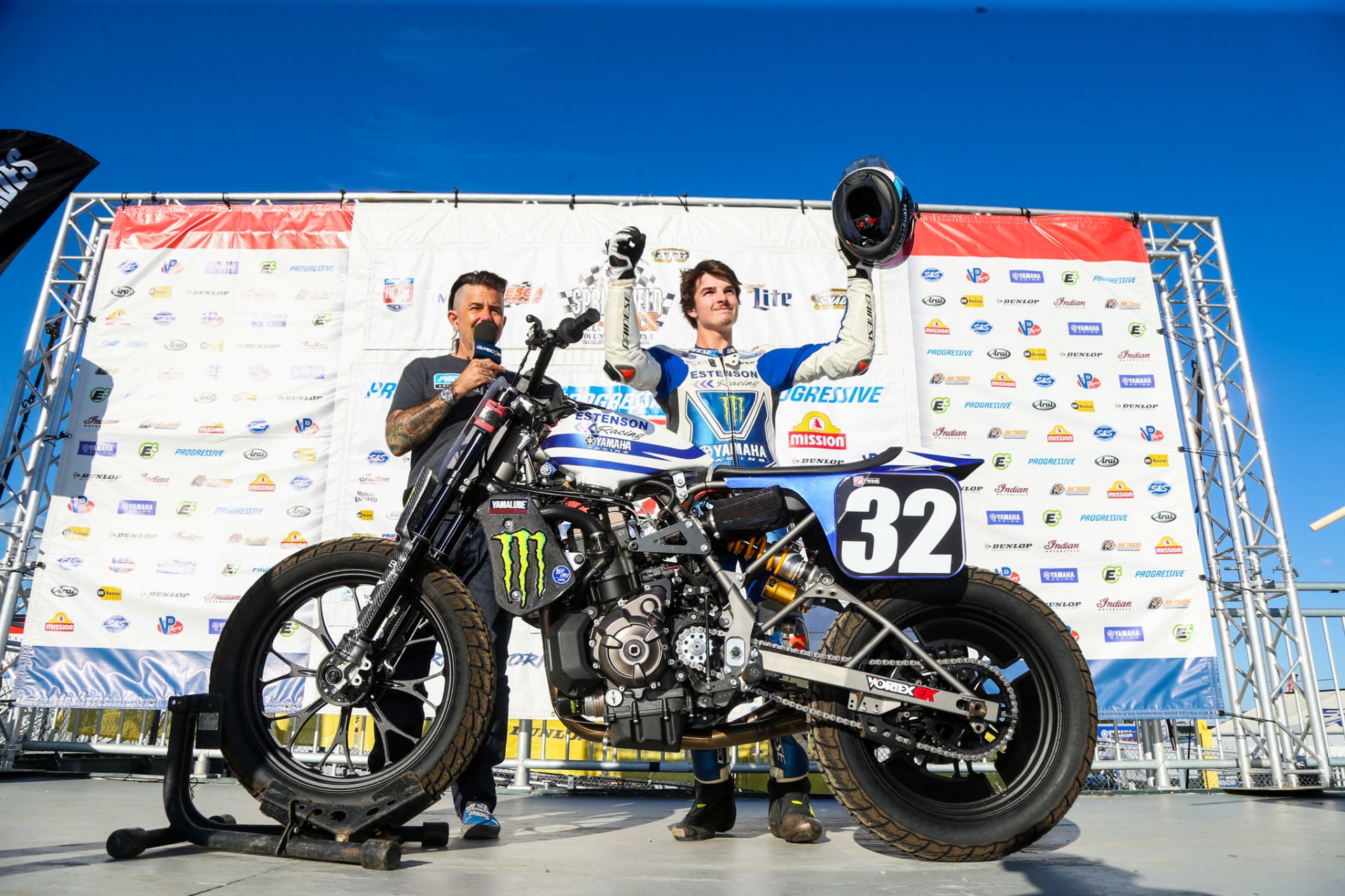 With challengers in the mix on day two, the young Daniels showed wisdom beyond his years. Yesterday’s fastest qualifier result carried over to today’s second round, and he lined up on the front row for his Semi. The 18-year-old missed a shift at the start and found himself mid-pack, but he quickly recovered and weaved his way to the front to grab another win. He backed that up with another victory in the thrilling four-lap shootout -- the Memphis Shades Babe DeMay Challenge -- crossing the line .024 of a second of the competition to take the prize money and his second win of the day.

In the Main Event, Daniels grabbed the holeshot but wasn’t able to make a clean break from the pack. He was shuffled to the runner-up spot early in the race and then searched for different lines to find an advantage. The defending AFT Singles Champion stayed in the top three and took over the lead a couple of laps after the halfway mark. In typical Springfield Mile fashion, it all came down to the final lap and a drag race out of Turn 4 to the finish line. Daniels was passed in Turn 3, but he kept his cool and positioned himself to use the draft and take the win by .022 of a second.

On the SuperTwins side, only one practice session before the Semi race presented challenges with the changing track conditions. Lined up on the third row, Beach got a decent start inside the top 10 and was eighth when the red flag came out, while Carlile came back from 11th to ninth to line up behind his teammate in the staggered restart. The dirt track/road racer got a good start and was sixth but ultimately crossed the line ninth, with Carlile right behind in 10th.

Next up for the Estenson Racing team is another Progressive American Flat Track doubleheader at the legendary Sacramento Mile on September 11-12.

“We had a pretty good day today here at Springfield on the second day of the doubleheader. Dallas rode really well all day in the Production Twins class. He was fastest in practice, won his Semi, the dash for cash, and then won a really tight one in the Main. Today was a lot different, though, compared to yesterday. It was more of a battle, but he was able to get the best of the other guys coming off of four and squeaked by for the win. That was great for his learning curve to be in a battle like that on a Mile and get some experience with drafting and strategy. I’m definitely happy with what we saw out of him today, and really the whole weekend. To sweep both the races Friday night and then both days in the Production Twins class, that’s really good to see, and we’re really proud of him for that.

“On the SuperTwins side, both guys were pretty close on pace all day. We were just a little off, and there was one spot on the racetrack that we just struggled with a little bit. For the majority of the track, I think we were just as fast as anyone and just off of the pace of the group that was battling for the podium. In the end, they were ninth and 10th, which was not the finish that we wanted, but we definitely made some progress here compared to last year.  I think we’ve got some stuff to build on for next week in Sacramento, and hopefully, we can find that little bit that we were missing here.”

“It was an amazing weekend here at Springfield! It really couldn’t have gone any better. The track changed quite a bit today; it was a lot smoother because they had a lot of time to work on it. Since I’ve never raced here before this weekend, I didn’t really know what the track was going to do. I talked to the team to see what they thought, and we made some changes for the dash for cash. We were able to get the win, but I was kind of struggling a lot with the feel and the grip.

“So we made some changes and went back out for the Main Event. I was running some different lines and had some guys with me, and I wasn’t pulling away like I was the day before. I was trying not to run on the groove because I thought that’s what I needed to do. Once I finally got into the lead, I went up to the groove and realized that it was actually better. After watching the SuperTwins Main Event, I’m glad I did that because when they were on the groove, they were going faster and faster each lap.

“It was definitely a huge learning experience for me. It was good to have to draft somebody at the line and not just win by a straightaway because I’m not learning anything when it’s like that. So, it was good to have a win pulling away from everyone and then also good to win one at the line. It was a dream weekend here at Springfield. I really needed a weekend like this after Peoria, when we were in a slump, feeling beat up after that big crash and behind on points. It seems like any time we’re behind; we can bounce back. We’re going to take this momentum into Sacramento and try to get my first mile win on a 450.”

“The second day at the Springfield Mile is always a toss-up with how the track will be. American Flat Track did a good job smoothing the track out a bit more, and the groove was wide, and we were running pretty high up on the track. The crew did a great job getting the bike dialed in to go racing with the limited track time. Every time we got on track, the bike was better, but we were losing time mid-turn compared to others. In the Main Event, we started rolling pretty well, but I lost the lead pack. Then as the race went on, I started to catch them just a little bit, but after we had that red flag, it was like they found another gear and pulled away. It was a rough day with another ninth-place finish, but we’ll keep working and try again next weekend in Sacramento.”

“Today in practice, the track was pretty wet, which didn’t really give us much insight for how it was going to be for the Semi. Then I just couldn’t get grip on the track at all in the Semi; it was really bad for me, honestly. In the Main Event, we had a good jump but it took me a little while to find the line that my bike wanted to run around on. Once I was able to find that line, I had a really good pace and I was able to run down quite a few people in front of me. Before the red flag came out, I was really confident that we were going to catch up and make a couple more passes and try to take a jab at getting to the front pack before the race was over. After the restart, I didn’t get the best jump, so I just did what I could do in the last few laps and was able to get a 10th-place finish. In the end, it was a big improvement from last year and a good weekend overall.” 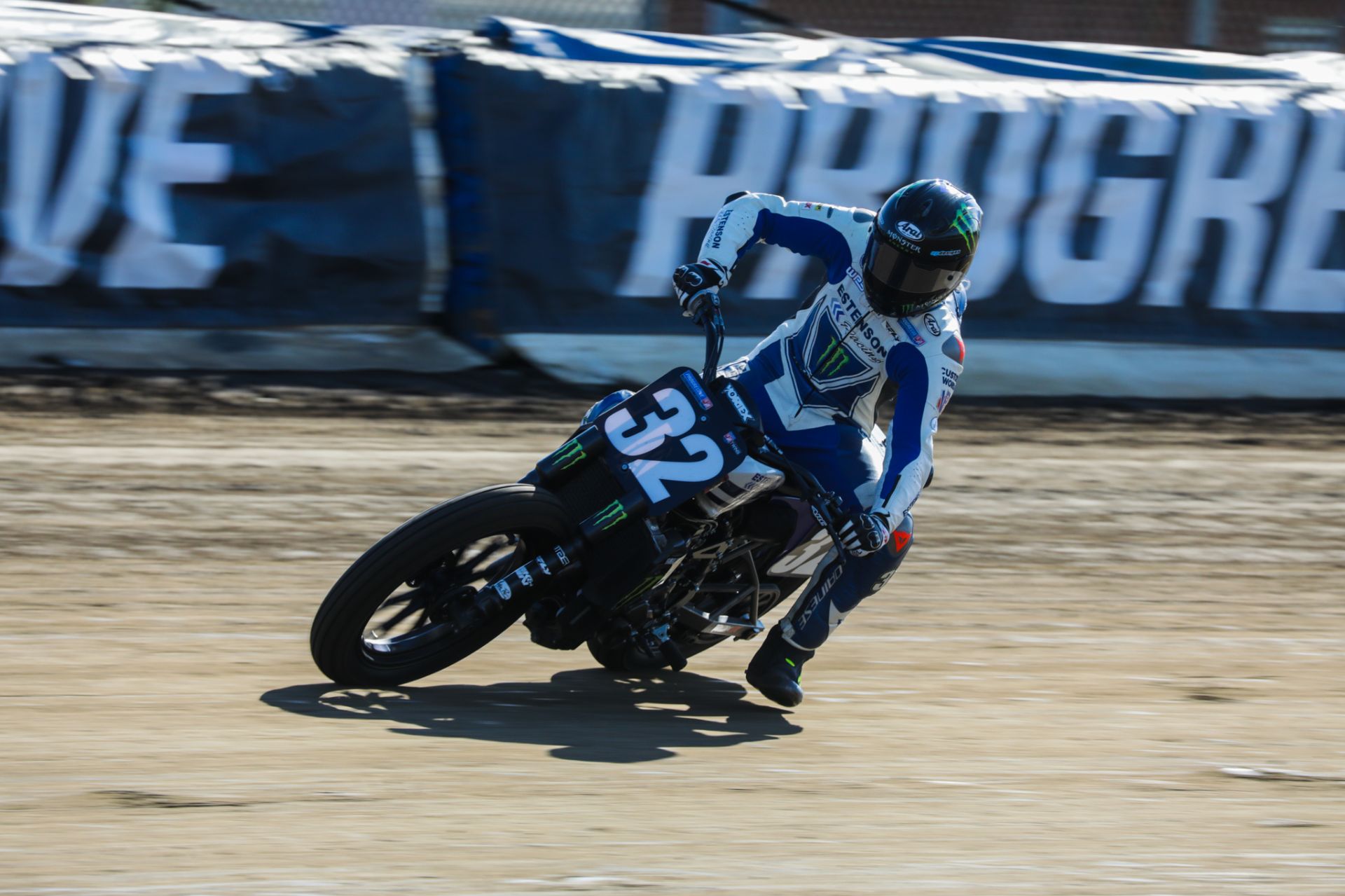