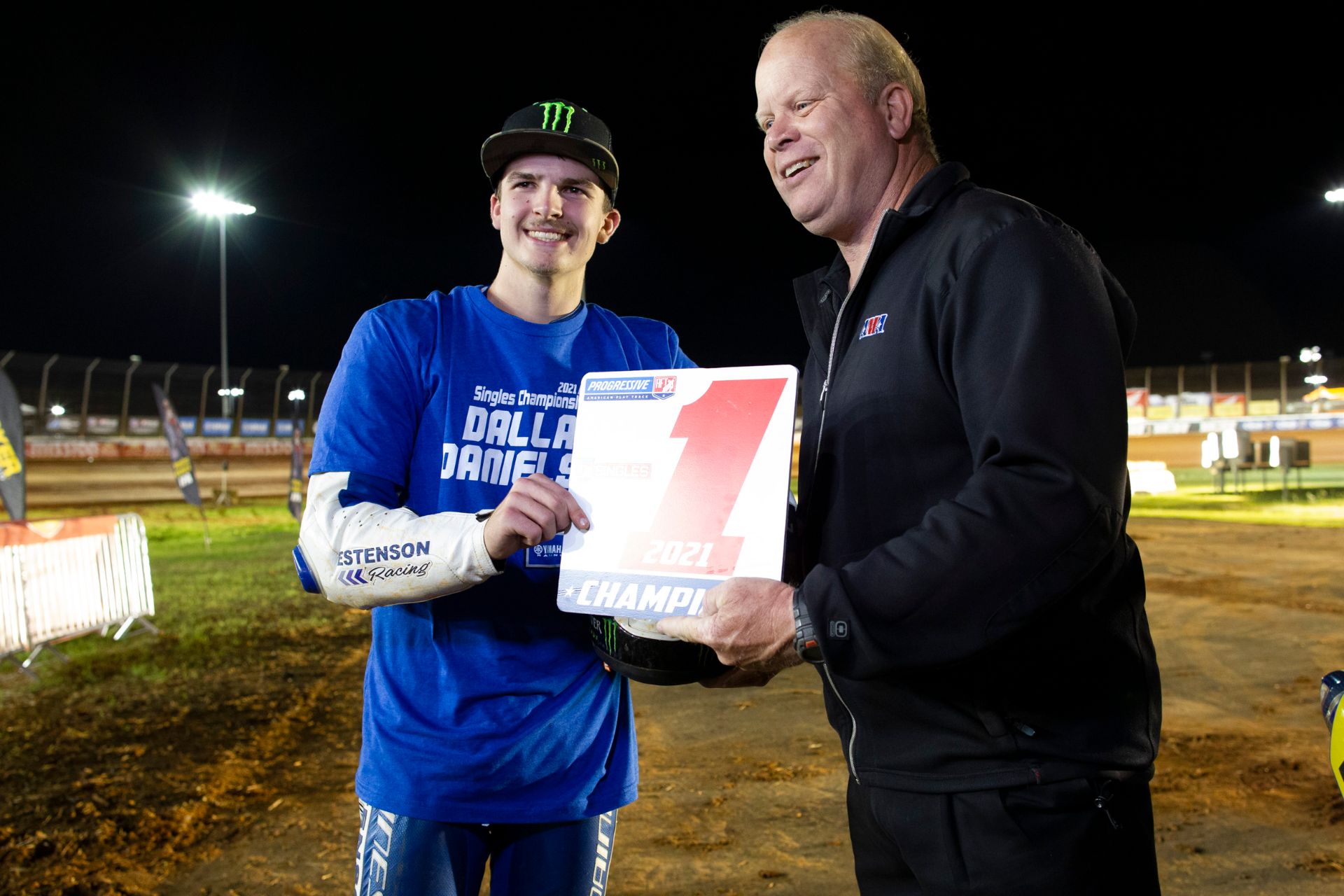 Estenson Racing’s Dallas Daniels sealed the deal on his second consecutive AFT Singles title with a sixth-place finish at last night’s Progressive American Flat Track season finale in Charlotte, North Carolina. JD Beach ended his Mission SuperTwins season on a high note by returning to the podium with a third-place finish. Unfortunately, Mikey Rush’s night ended early with a crash on the warmup lap of the AFT Singles Semi. Kolby Carlile had a big crash in the opening laps of the Mission SuperTwins Main and was unable to finish.

The season finale at the Charlotte Motor Speedway was delayed a day with rain on Friday, so it was an abbreviated schedule with only two qualifying sessions. After finishing fifth in his Semi, Daniels lined up on the third row in 10th. The defending AFT Singles Champion needed to finish 13th or better if his rival won. With the big picture in mind, he rode a smart race in the challenging track conditions and was able to advance to sixth, where he would ultimately finish to clinch the crown. In addition to holding on to his number-one plate, Daniels put his name in the record books as the only rider to earn back-to-back titles in the highly competitive AFT Singles Championship. The Illinois rider also had a solid debut in the Production Twins class this season, finishing on the podium at all four rounds entered and taking three race wins.

Beach had a solid start to the evening program, finishing fourth in his Mission SuperTwins Semi to line up on the second row of the grid for the Main Event. It was a complete restart after his teammate Carlile went down early in the race, and Beach was fifth after the first lap and was maintaining that position. Before the halfway mark, the red flag was brought out again after a big crash involving two riders up front. The Owensboro rider lined up third for the staggered restart and was right on the heels of the race leader. Beach had a look at multiple passing opportunities and moved to strike on the final lap of the race. With two laps to go, it turned into a three-rider fight to the finish and he ultimately crossed the line third. He ended the season with a top-five finish in the point standings, scoring a pair of wins and a total of four podiums.

The AFT Singles team went out in the first Semi race of the evening, but unfortunately, Rush crashed on the warmup lap and broke his leg. On the SuperTwins side of the tent, Carlile had a big crash early in the Main Event and incurred a similar injury to his teammate. Both riders were sent to a local area hospital and are being evaluated, and an update will come at a later date.

“It was a bittersweet night here in Charlotte. The highlight of the night was Dallas wrapping up his second 450 singles championship. That’s quite an accomplishment, and I’m really proud of him and the entire team for everything they put into that. It wasn’t easy this year. We had some obstacles to overcome, but everyone stuck together, and we were able to pull it off. So, that feels really good.

“JD had a really good night in the SuperTwins class. After the red flag, he got a good start and battled for the lead the entire race. In the end, he just barely came up short with third place, but it was a solid podium to wrap up the season. I think we made some good progress on the SuperTwin this year, and we’re happy to see that.

“Unfortunately, Mikey and Kolby had some bad luck tonight. Both of them ended up crashing and having a fairly similar injury, breaking their lower left legs. They are still being evaluated to know the extent of the injuries, but either way, it looks like they’re both going to require surgery and will need a little time to recover. I feel horrible for them to have their seasons end like that. We’re definitely wishing them a speedy recovery and I’m sure they’ll be back fighting up front in no time.”

“It’s an amazing feeling to win back-to-back championships in the Singles class. Today was nerve-racking, though. The track was pretty much everything but what I wanted it to be. It was pretty treacherous, and we had spots that you couldn’t tell were slick spots and some tacky spots that would catch your foot. In practice, I felt decent, but I didn’t qualify all that well. As we went out for our Semi, my teammate, Mikey, spun around in the first corner on the warmup lap, and that kind of freaked me out a little bit.

“Last year, I wrapped my championship up three rounds early, so I’ve never been in the position where I had to ride conservatively. It was definitely a little weird for me, and I wasn’t a huge fan of it because I’m better when I’m riding all out for a win. I felt like I had the speed to win the Main Event tonight, but I had to look at the big picture. It was definitely tough, but I had a few moments in the Semi and the Main Event, so I just needed to focus on whatever I needed to do to seal the deal since a race win didn’t matter. I was kind of paying attention to where I was at and we were able to get the job done in the end. All in all, it was an awesome night. I have to give a big thanks to the whole Estenson Racing team for all of their hard work and sticking behind me.”

“I’m glad that we got the race in, with all of the rain and stuff. With the abbreviated schedule, I was nervous because usually, we need as much time as possible before the Main Event to get the bike setup, but it all went really well. In the Main, I was starting eighth, so I was hoping to get maybe a top five. Once we got going, I felt really good, and the bike was working great. We had a few red flags, and each time I just felt better and better. I was working with Jared (Mees) on the inside and outside and trying to figure out a good spot to pass him. I had a really good idea going into the last lap and then two laps to go, Davis (Fisher) came by me and used my idea. So then I had to try and pass two guys and I just couldn’t get it done. To end the year on the box is awesome. The team worked really hard, so it feels good going into the off-season with another podium.” 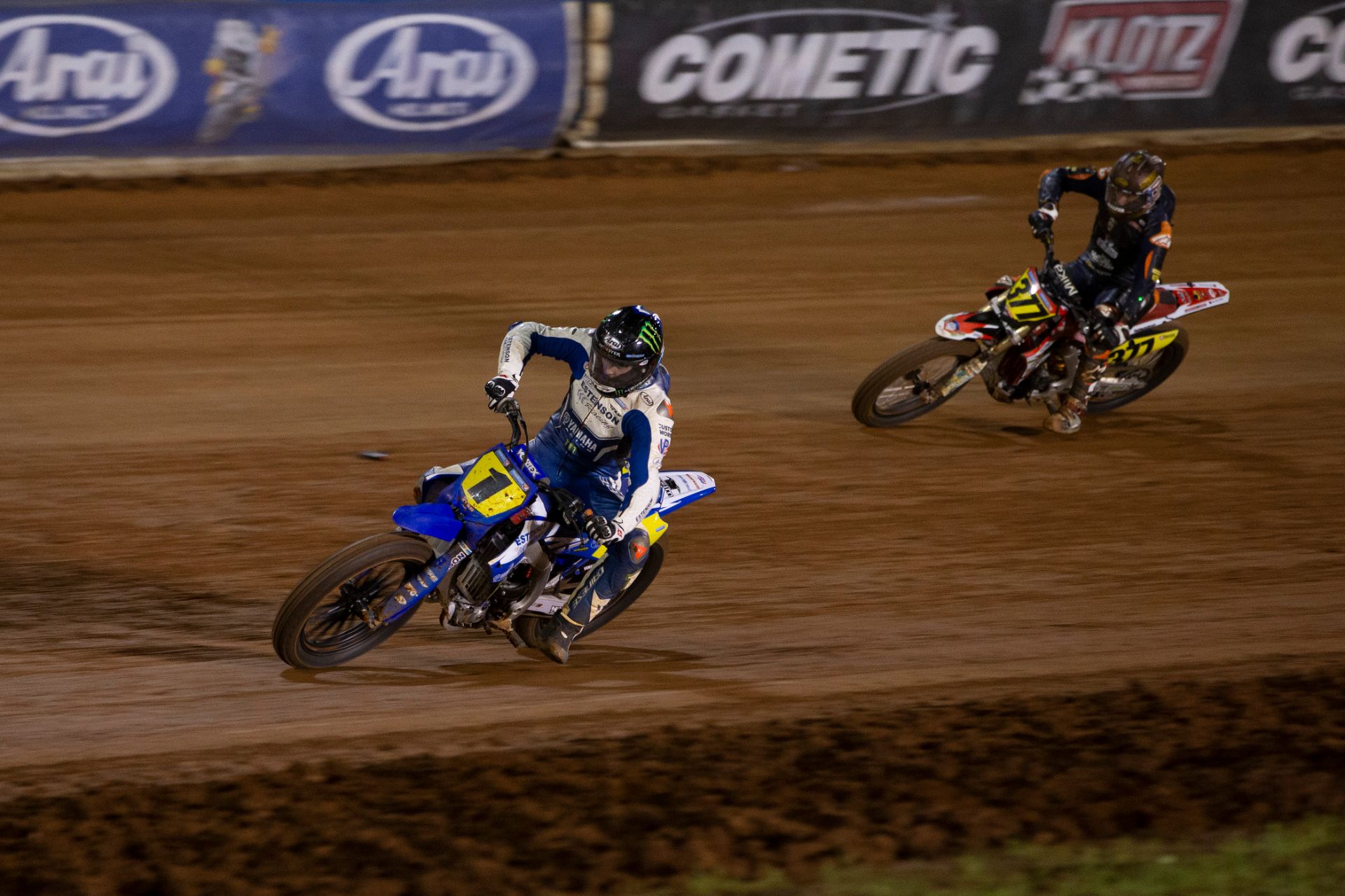