Stage six of the 2021 Dakar Rally proved to be a highly positive one for the Monster Energy Yamaha Rally Team with Ross Branch narrowly missing out on taking a maiden stage win. Claiming an impressive runner-up finish, just 13 seconds behind the eventual stage winner, Ross is now placed fourth overall in the provisional classification at the halfway point of the rally. Teammates Adrien Van Beveren and Franco Caimi also posted strong results by claiming sixth and 13th respectively with all riders now looking forward to the event’s rest day tomorrow.

Heading west throughout stage six, riders reached the town of Ha’il following a 347-kilometre special. Taking riders through sandy tracks early on, competitors were then faced with undulating sand dunes for much of the challenging stage. Now, having successfully completed six gruelling stages, riders and team staff will enjoy a well-earned rest day tomorrow, ahead of six further days of racing that begins with the event’s marathon stage on Sunday.

As the ninth rider to enter the special, Ross Branch excelled from his advantageous starting position to very nearly claim his debut stage win. Pushing hard from the start in a bid to make up time on the leading riders, Ross ended the stage agonisingly close to earning victory, just 13 seconds behind the eventual winner. More importantly, the Yamaha WR450F Rally mounted rider began the stage 11 minutes down on the provisional leader but following his excellent performance has now closed that gap to just under four minutes. Ross sits in a comfortable fourth place at the end of week one.

Another Monster Energy Yamaha Rally Team rider capitalising on his starting position was Adrien Van Beveren. After a challenging day yesterday, the Frenchman returned to form, tackling the high-speed terrain found on stage six with focused determination. Maintaining a fast and consistent pace throughout the 347-kilometre special, Van Beveren placed sixth on the stage and began to chip away at the leading riders ahead, eventually making up four minutes. Adrien now looks ahead to the second week of racing with confidence.

Franco Caimi posted another consistent result on stage six. With the rest day in sight and following yesterday’s difficulties, the Argentine opted to maintain a strong rhythm throughout the special to avoid mistakes. Franco climbed as high as 10th place where he remained for much of the stage before going on to finish 13th and successfully reach the halfway point of the rally.

With stage six of the 2021 Dakar Rally now complete, Ross, Adrien, Franco, and the entire Monster Energy Yamaha Rally Team will enjoy a well-earned rest day ahead of stage seven, and leg one of the rally’s two-day marathon stage on Sunday 10 January. Competitors will depart from Ha’il and head to Sakaka, reaching the most northerly point of the event upon their arrival. Riders are then permitted just 10 minutes to prepare their own machines ahead of the second marathon stage leg.

A really good stage for me today, so close to the win! It was a fun day on the bike. All the sandy tracks meant that I didn’t have to rely too much on my navigation and I just went as hard as I could. So close to the win but I’m really happy anyway. I’m now looking forward to the rest day tomorrow and I’m excited for another week of racing.

Today was much better, especially compared to yesterday. I had a good feeling with the bike and was able to push the whole time. I’m still disappointed about yesterday but I will keep my head up and take it day by day. Rest day tomorrow but for the remaining stages I am positive. My bike is good and I feel strong so next week will be really good for me.

Stage six is now done. Today there was a lot of sand on the stage, but I felt good on the bike and I was able to keep a strong rhythm. It was a good result for me going into the halfway point of the rally. We’ve had to overcome some challenges this week but I feel good on the bike and I’m looking forward to the rest day, some nice food, and then it’s onto week two. 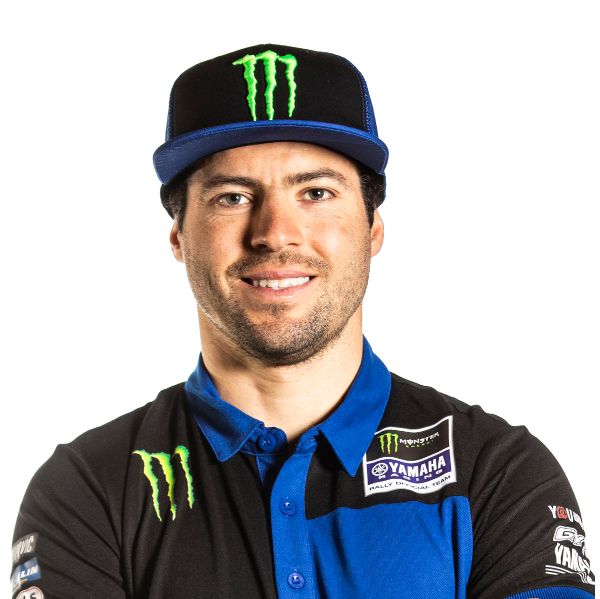 Today we saw something amazing from Ross. For the whole stage he took risks and pushed super hard and very nearly won the stage, just 13 seconds away from the win. It’s frustrating for him to not win, but also really positive as he knows, and we know, what he is capable of. He is now fourth, less than four minutes from the lead so this is a great end to the first week. Adrien and Franco bounced back really well after yesterday. Adrien’s confidence is coming back now and he was really good today. He pushed hard, no mistakes and finished sixth so this is good for him. Franco also rode very well. He made a small mistake, nothing major, but is happy with himself and has a good feeling with the bike. We now have a rest day, but the important thing is that our riders are all happy and healthy, and looking forward to the next stage.