As the Yamalube YART Yamaha Team gear up for the official 24H SPA Endurance World Championship Motos Pre-Test at the Circuit de Spa-Francorchamps on 17 and 18 May, we go behind the scenes with the team as they raced to a podium finish in the 24 Hours of Le Mans back in April.

VIP Pass follows the team through practice, qualifying and the 24 Hours of Le Mans race itself, with the three riders, Niccolò Canepa, Marvin Fritz, and Karel Hanika, together with Crew Chief Andrew Pitt, giving you a unique insight into what it takes to race around the clock on the iconic Bugatti circuit. 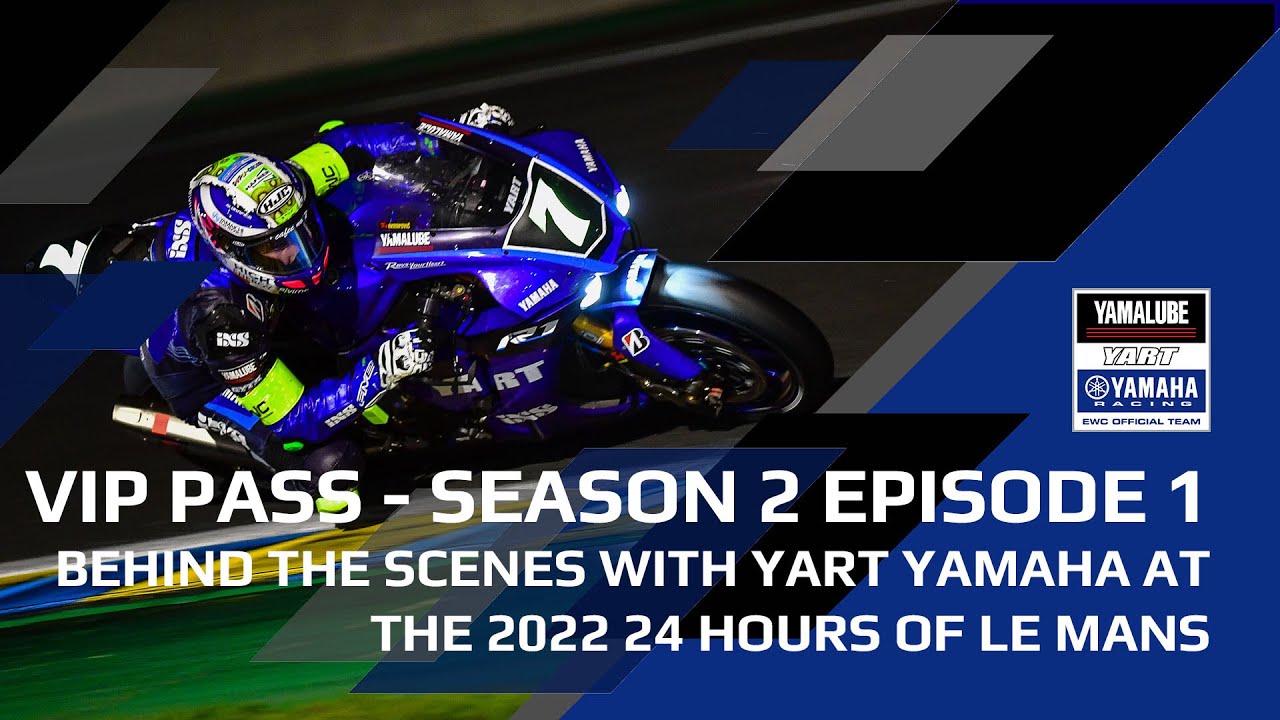 But Le Mans is in the past, and now the YART Yamaha Team are looking forward to taking on a new challenge as EWC returns to the legendary Spa Francorchamps for the first time since 2001. The 24 Heures of Liege was a mainstay on the endurance calendar for 30 years, and the iconic track makes its return in 2022, 101 years after hosting its first professional motorcycle race.

Learning the technically demanding racetrack will be critical during the test as both Hanika and Canepa have not ridden there before. Both riders only know the circuit's layout from playing computer games, while Fritz and reserve rider Robin Mulhauser have prior experience of the track and will be looking to help their teammates get up to speed as quickly as possible. The two days will be vital for the team to ensure they can find the best possible setup for their YART Yamaha R1 with Bridgestone tyres ahead of the second round of the 2022 EWC Season and all three riders are excited to get started.

This classic circuit has undergone some changes in recent years, with its EWC-specific 6.985km layout making it the longest on the endurance calendar in 2022. Known for its mix of long straights and high-speed sections - including the infamous Eau Rouge and Raidillon corners - elevation changes and a woodland setting, the circuit is one of the most exciting yet challenging in the world. The return of endurance racing to the track has seen some changes to the layout to meet motorcycle racing safety requirements, including expanded run-off areas at several corners, the repositioning of safety barriers in some sections, and the minor realignment of Turn 9. The team head into the test buoyed by a superb podium finish after a sensational fightback at the Le Mans 24 Heures Motos. Having qualified on pole, a slight technical issue at the start of the race compounded by a safety car saw them drop down to last place. Undeterred, they displayed their true character by battling back to secure a stunning second, 1m 45.582s off the victory. The 55 points they claimed at the opening round means that they are second in the overall standings, just eight behind the leaders, with 65 points up for grabs at Round 2.

The YART Yamaha Team will be joined on track at the Pre-Test by the current leaders of the Dunlop Superstock Trophy, Team 18 Sapeus Pompiers CMS Motostore, who finished fourth overall at Le Mans to take victory in their class. The Viltais Racing Igol team (13pts) will be looking for improvements after battling for the podium at the opening round before retiring towards the end of the race, along with the Maco Racing Team (12pts), who fought bravely in France with just two fit riders to finish 32nd, their valiant effort earning them the Anthony Delhalle EWC Spirit Trophy. The Wojcik Racing Team, Team Moto Ain, and the 3ART Best of Bike squad are looking to use the test to ensure they can bounce back as strongly as possible after being forced to retire from the opening race with Round 2 of the FIM Endurance World Championship, the 24H SPA EWC Motos, taking place on the 4th & 5th of June.

“I am looking forward to the Pre-Test because I have never ridden Spa before, and this will be my first time there. I have played the track a lot on various computer games, so I have been practising to learn the layout. There have been changes in the last couple of years; there is new tarmac in some areas and bigger run-off areas, so getting up to speed quickly will be important. The event should be amazing, and we are feeling positive as we had a small test lately in Brno, and everyone was fast. We are in a strong position in the championship, plus Marvin and Robin, who have ridden at the track before, say it should suit the R1 and the Bridgestone tyres, so I cannot wait to get started. The result in Le Mans was a great way to start the season. It was vital to finish with so many points up for grabs in a 24-hour race. To be heading into round two just eight points behind the leaders is a great position to be in, and we want to build on this momentum.”

“I am really excited to go to Spa to test! It is such an iconic track; it will be special to ride at the circuit. We have never raced there as a team before, so we will have to focus on learning the track first, but we have an advantage as Marvin and Robin have ridden at the circuit before, so they can help us speed up the process. This will be an amazing 24-hour race, I am looking forward to it, and I really can’t wait to ride the first few laps at such an incredible and unique racetrack. Our result last time out at Le Mans gave us confidence, as the whole team worked superbly to make sure we came away with as many points as possible. Our focus now is to make sure we continue this form into Round 2.”

“I can’t wait for the Pre-Test because Spa is a simply amazing track! It is almost 7km long, and with all the elevation changes and the incredible scenery, it is fantastic and one of my favourite circuits. I have ridden at Spa a couple of times before and came here to help develop the tyres for the race with Bridgestone last year. It will be an amazing event, and it is almost a home race for me as it is just 3 hours from my house, so I think the atmosphere will be fantastic. Niccolò and Karel haven’t ridden there before, but we can use two bikes in the test, so I will help teach them the track, and I know they will pick it up very quickly. The second place in Le Mans was so important; with three 24-hour races this year and so many points up for grabs in each, it was vital to get off to a good start. We want to carry this confidence into the second round. Once again, the aim is to finish the race, and if we finish, we know we have the pace to be on the podium. The team feels confident, and we cannot wait to start at Spa.”