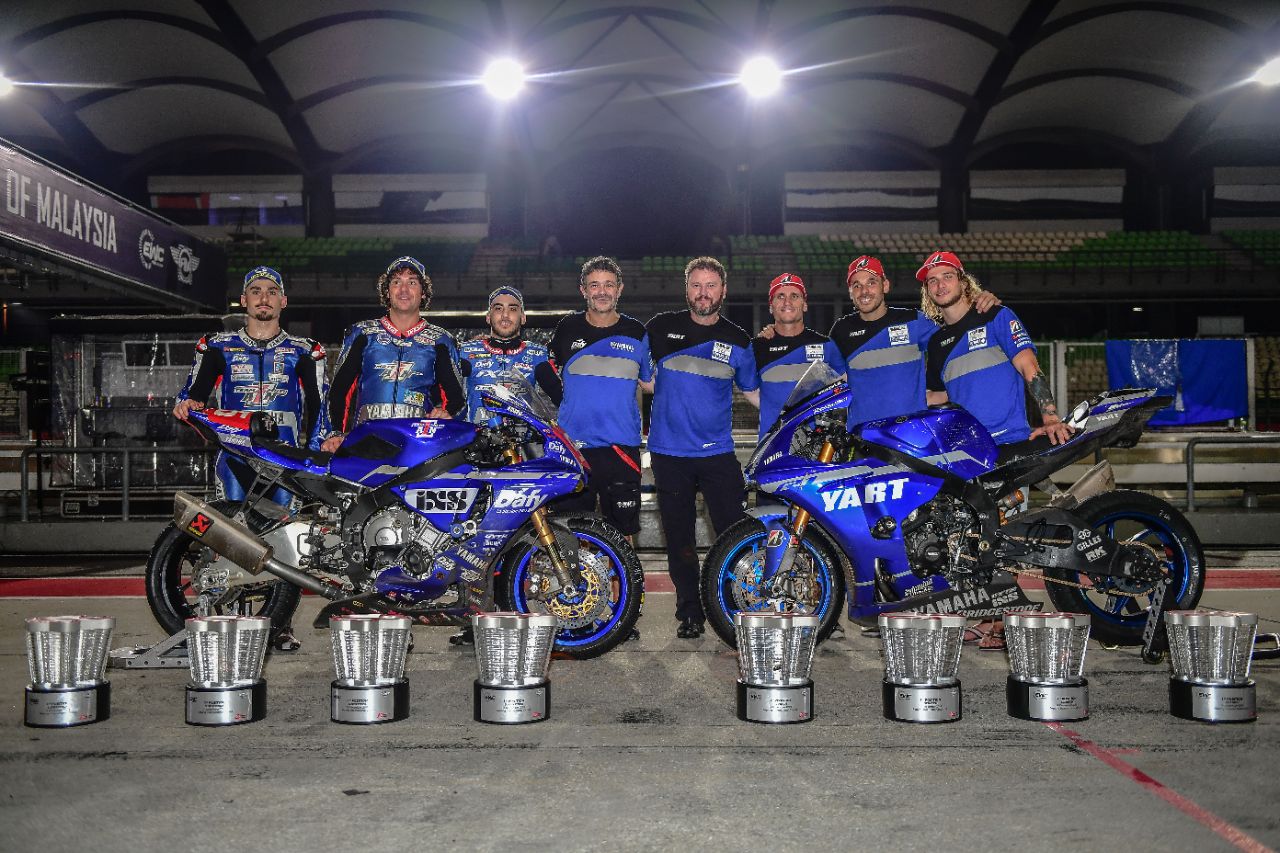 The YART Yamaha EWC Official Team reignited their championship challenge with an impressive victory in a rain disrupted 8 Hours of Sepang race, the second round of the 2019/2020 Endurance World Championship. The Yamaha Sepang Racing Team were leading the restarted race in the early stages, until Mike Di Meglio collided with the rear of Michael van der Mark's Yamaha R1 in the final corner, causing both to crash. After losing almost 10 minutes in the pits for repairs, the team fought their way back impressively to eventually finish in the points in seventh position.

In scenes reminiscent of the opening round of the season at the Bol d'Or, the start of the inaugural 8 Hours of Sepang was delayed for more than two hours due to torrential rain and standing water around the Sepang International Circuit. When the race did finally get underway the riders started behind the safety car, where they remained for just nine laps before deteriorating weather conditions forced race officials to show the red flag and suspend the race.

The weather finally improved enough to get the race restarted with three hours remaining on the clock and it was van der Mark and Di Meglio who made the early running at the front, until a mistake by the Frenchman in the final corner saw him collide with the Yamaha rider, causing both to crash. While di Meglio was able to continue, van der Mark was thrown over the highside and was forced to return to the pit box for repairs, losing almost 10 minutes in the process.

In the meantime, Niccolò Canepa was busy fighting his way back through the field, after an electrical problem dropped the YART Yamaha rider back to 26th position on the opening lap. In difficult conditions, with grip still at a premium on the wet track and with no electronic rider aids for most of his first stint due to a technical issue, the Italian's progress towards the front of the race was relentless.

Canepa took the race lead after the first round of pit stops, but was overhauled by di Meglio shortly afterwards, only for the Frenchman to crash for a second time, leaving the YART Yamaha rider clear at the front of the race, with a significant advantage over his pursuers.

At the second and final pit stop, with just 30 minutes of the foreshortened race remaining, the YART Yamaha team opted to leave Canepa on the bike for a third stint, rather than send out one of his teammates in what were rapidly changing conditions. It proved to be a wise decision, with Canepa witnessing a number of crashes in his final laps, as his fresher rivals were caught out by the unpredictable track surface.

After three hours of racing, in what were treacherous conditions, and without making a single mistake, Canepa crossed the line to secure his and YART Yamaha's first win of the season. The victory places YART Yamaha fourth in the championship standings with 43 points, 36 points behind the series leaders.

The final third of the race also proved pivotal for Yamaha Sepang Racing. Having lost a lot of time as a result of the crash in the opening stages, van der Mark's speed and consistency saw him recover a significant number of places during his two stints on the #21 Yamaha R1, which he handed over to Franco Morbidelli at the final pit stop. The MotoGP rider joined the race outside the top 15 but went on to thrill the crowd with a spectacular display of riding, as he scythed his way through the field to eventually claim an incredible seventh-place finish at the chequered flag.

The Moto Ain Yamaha World Cup Supported Team made it a double celebration for Yamaha in Malaysia, as Roby Rolfo, Robin Mulhauser and Hugo Clere maintained their 100 percent record in the 2019/2020 championship with another SST class win, to add to their previous victory at the Bol d'Or. They finished fourth overall in today's 8 Hours of Sepang race, missing out on the final podium place by only the narrowest of margins.

"I'm incredibly happy with win here in Sepang, as it started as a difficult week, especially with the injury to Marvin. Luckily Karel was able to step in as a replacement at the last minute. I was feeling good at the start of the race but, after only a couple of laps, the bike switched off and when it came back on it was with no traction control or any electronics. That made things very difficult, but I managed to come back from P20 to P1 at the end of my first stint, which I was supper happy about. When the safety car came out, I switched the bike off and on and everything started to work as it should once again. At both pit stops Mandy asked me if I wanted to continue and both times I said yes, although I did take a bit of persuading at the first stop. I pushed hard throughout the race and, at the end, we took the win. Yes, we were a bit fortunate with the crash, but that's part of the game in endurance racing, as we've found out to our cost in other races. So, I'm super, super happy and I'd like to say a big thank you to my team and especially my teammates, as we race and win together. The win means we're back in the championship and now we need to focus on repeating this success at the next race, the 24 hours of Le Mans."

"Obviously we are happy with our first win of the season, especially after what had initially been a difficult week for us here in Malaysia and one overshadowed by Marvin's injury. The team and the riders didn't let these difficulties defeat them, but instead worked hard to ensure we were well prepared for what turned out to be a very difficult race. It was shorter than expected because of the weather, but no less exhausting for that. We had a problem with the bike in the early stages of the race, but Niccolò did an incredible job to fight his way through to the front in difficult conditions and without any electronic rider aids. At the first pit stop it was tight at the front of the race, so we decided to keep Niccolò on the bike, rather than lose time while Karel got used to the conditions. We made the same decision at the final pit stop, opting to stick with Niccolò rather than putting Broc on the bike for the final 30 minutes on a damp but drying track. It was the correct decision and it paid dividends for us in the end. So, thanks to the team and the riders for a fantastic job; this win puts us back in the game as far as the championship is concerned. Finally, I wish Marvin a speedy recovery and I look forward to seeing him back on the bike, and hopefully on the podium, in Le Mans."

"It was a weird 8 Hours of Sepang, but when we did finally get to race the conditions were good. I had a good feeling with the bike and a strong pace from the start, so when I got passed for the lead I decided to sit in behind and follow rather than take any risks. My plan was to retake the lead when we hit traffic. I'm not sure what Di Meglio's plan was with the pass at the final corner, but it didn't work, and it ended for me with a massive highside that let me badly winded. The team did an amazing job to get the bike back on track and I was quick to rediscover my rhythm so, apart from the position, I enjoyed the race. When Franco took over the bike for the last stint, we could see he had really good pace, but we were still surprised to finish as high as seventh. Massive thanks to the team, who worked so hard for us this weekend, and also to Franco and Hafizh, who I really enjoyed racing with."