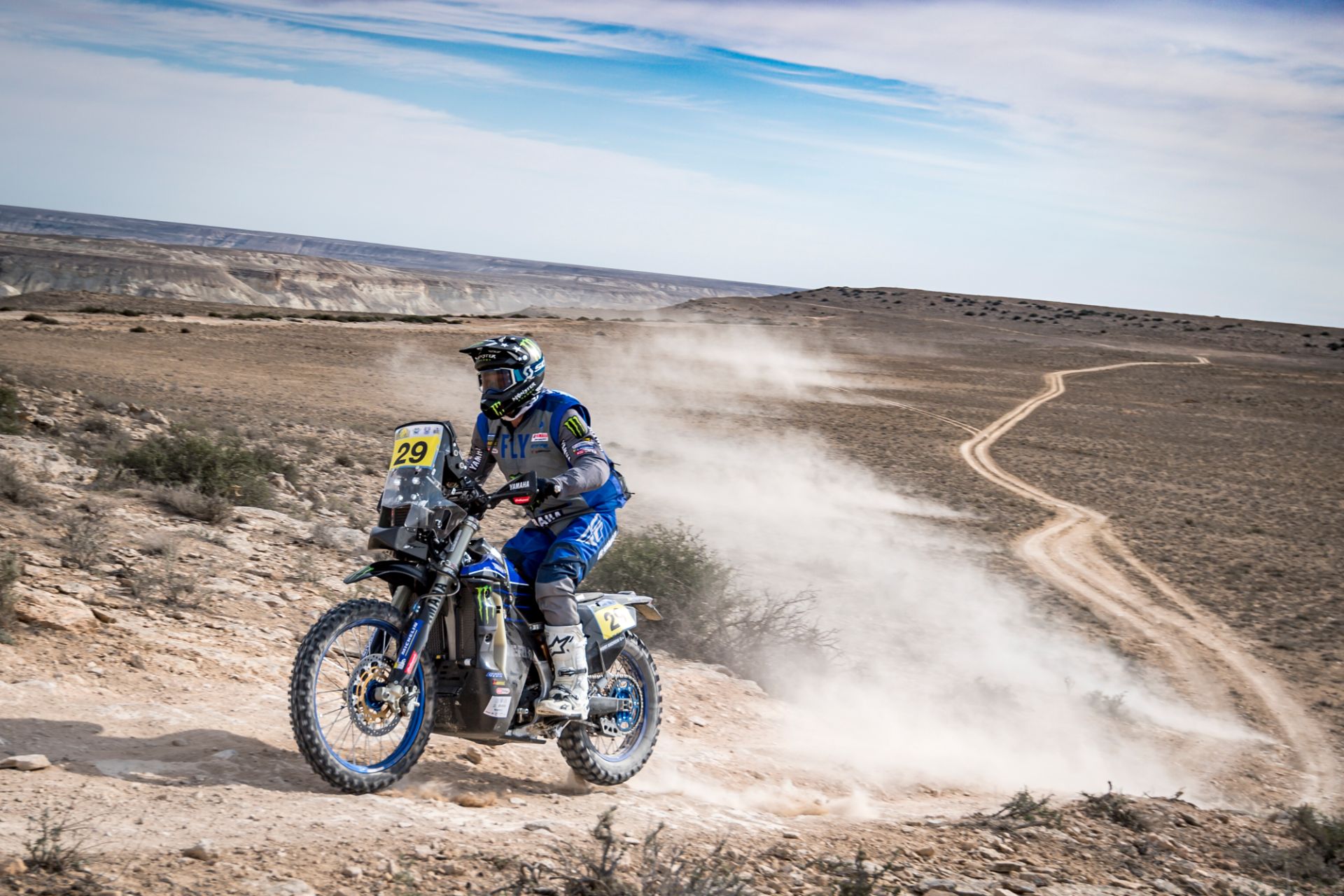 The Monster Energy Yamaha Rally Team has continued its impressive start to Rally Kazakhstan with Andrew Short fairing best on stage two, placing third overall. Close behind in fourth was Ross Branch with Adrien Van Beveren rounding out the top five. Following another successful day of racing for all three riders, they all maintain their top five ranking in the overall provisional classification.

The second day of racing at the 2021 Rally Kazakhstan formed leg one of the event’s marathon stage. Just shy of 280km in length, the special was high speed with racers navigating their way through a maze of desert tracks. Upon completing the stage in Bay Kendirli, all riders were excited to have posted strong results for the second consecutive day.

Continuing his solid start to Rally Kazakhstan, Andrew Short claimed third overall following a strong ride through a challenging stage two. Despite picking up a five-minute penalty yesterday after losing his timecard, the American maintains his fifth-place overall position in the provisional classification with three days of racing to go.

Winner of yesterday’s opening stage, Ross Branch delivered another impressive ride. Opening the special following his victory yesterday did little to faze the 35-year-old. After almost three hours of racing, and despite a small navigational error, Ross finished just over four minutes down on stage two winner, Skyler Howes.

Adrien Van Beveren continues to post consistent stage results at Rally Kazakhstan. Feeling comfortable on his Yamaha WR450F Rally, the 30-year-old enjoyed riding alone for much of the special and placed fourth overall. The Frenchman maintains fourth place in the provisional standings, extending his advantage over the riders behind him and now looks forward to tomorrow’s second leg of the marathon stage.

Tomorrow’s third stage, and the final leg of the event’s marathon stage, looks set to offer up a variety of challenges and terrains. Beginning with 50 kilometres of rutted desert tracks, hardpack conditions will soon follow before the special ends with a serious physical test for all riders – a 10km stretch of rolling sand dunes.

Stage two was really fast. The navigation was a bit easier than expected and it was pretty much wide open all day. The turns were fast as well so the stage wasn’t quite as interesting as yesterday, but I’m really happy to place third and complete the first part of the marathon stage. It’s good to be in such a great position overall this early in the rally, it was an awesome day for Yamaha.

It was a fast one today. I opened the road which I really enjoyed as I need that experience to improve my riding. I made a little navigational mistake after the first fuel stop, which was frustrating, but it’s all part of the learning curve. I had a lot of fun today and I like the high speeds, so it was a nice stage for me. I opened the stage and didn’t lose much time overall so I’m really happy about that. It was the first leg of the marathon today and I didn’t really have to do anything to my bike. Overall, it’s been a great day.

Today was ok. Unlike yesterday I rode alone for most of it, which was great as I could focus on myself and my riding. I’m still getting used to the roadbook that we’re using for this rally and with the high speeds that we had today, it was tricky to follow at times. I feel great on the bike, I’m comfortable, and it’s working well. As it was the first part of the marathon stage, I had to prepare the bike for tomorrow. I put some new brake pads in, more of a precautionary thing really, and now I’ll take some rest and focus on the final three days of racing.