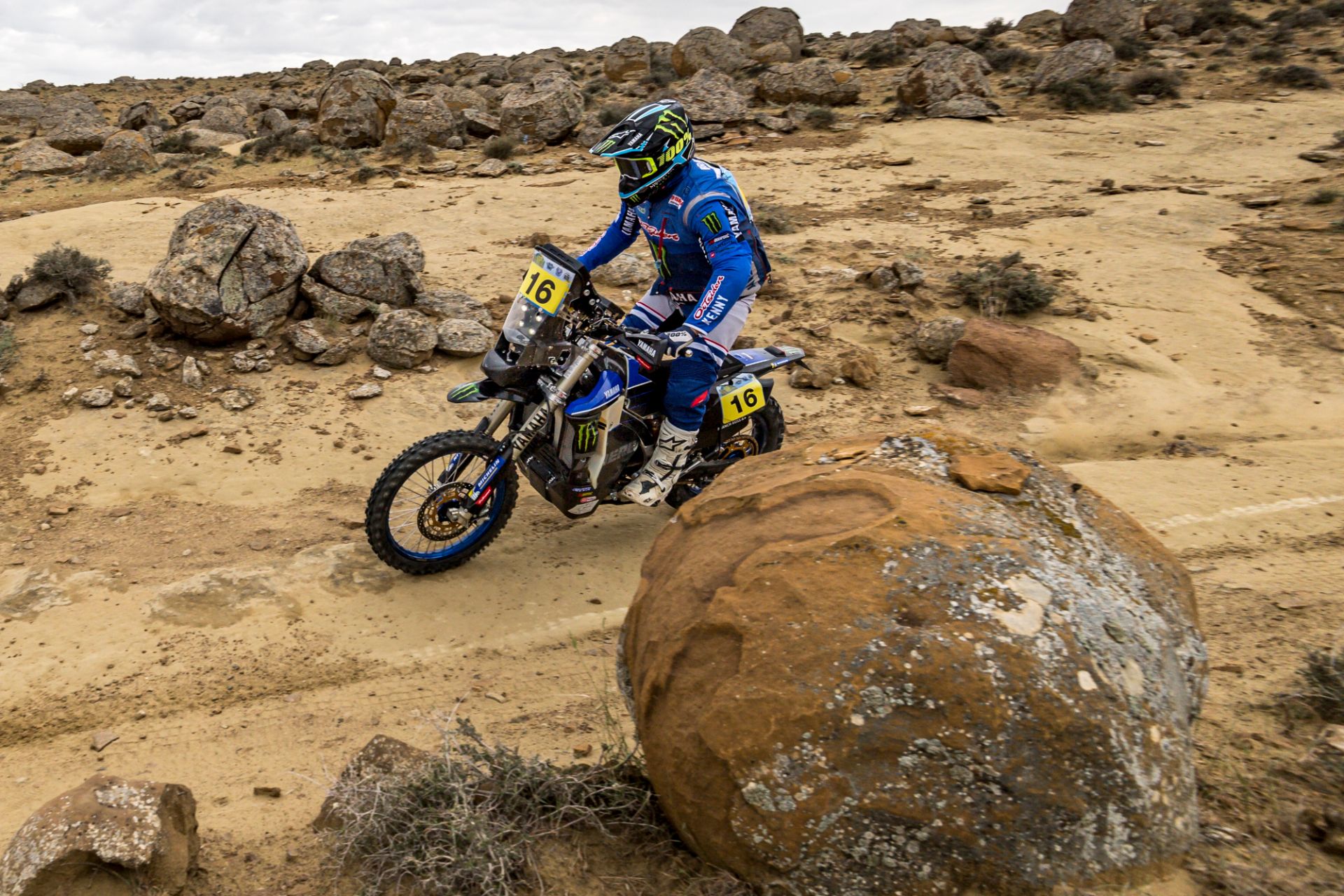 Monster Energy Yamaha Rally Team’s Ross Branch maintains his position at the top of the Rally Kazakhstan leaderboard with just one day of racing remaining. Delivering another top-five result on the penultimate day of the event, with his fourth-place finish, Ross is now well positioned to end the rally on a high, hopeful of securing the event win following the conclusion of tomorrow’s fifth and final stage. Completing another strong day for the team, Adrien Van Beveren placed fifth with Andrew Short coming home in 11th despite a sizable crash and broken navigational tower.

Stage four of Rally Kazakhstan proved to be highly positive for the Monster Energy Yamaha Rally Team with all racers completing the special stage with a strong result. The sandy terrain found on the penultimate stage was to the liking of Ross, Adrien, and Andrew, with each rider now looking ahead to the final day of racing.

Taking another key step forward towards the event’s finish line, Ross Branch placed fourth on stage four of Rally Kazakhstan. Opting to focus on his navigation, to ensure a solid result on the 309km special, Ross’ strategy paid off and he will enter tomorrow’s final stage with a healthy lead of just over four minutes in the overall provisional classification.

As the second rider to enter stage four, Adrien Van Beveren quickly moved forwards to open the special after just three kilometres. Remaining as the leading rider through to the end of the stage and despite leaving clear wheel tracks in the sandy soil for the chasing riders to follow, the Frenchman lost very little time due to his impressive navigational skills. Going on to complete the special as the fifth fastest rider, with just one stage remaining Van Beveren sits third in the overall provisional classification with a comfortable margin over the riders behind him.

Andrew Short found his flow on the sandy stage four. The motocross style conditions favoured the American as he began to make up time on the leading riders in a bid to move up the overall leaderboard. Frustratingly, a big crash resulted in a broken navigational tower, which left the 38-year-old without a roadbook to follow. Unharmed by the crash, Short followed the lines left by the leading riders to complete the stage in 11th, maintaining his fifth-place ranking in the provisional standings.

Tomorrow’s final 267-kilometre stage provides one last challenging day in the saddle for all competitors. Beginning on sandy terrain, the fast, hardpack conditions found early on in the rally will return. After riders reach the 158km mark, speeds will decrease with rocky plateaus and technical descents providing a distinct change of pace. Accurate navigation is essential in order to successfully complete Rally Kazakhstan.

It was another good day today. I focused a lot on my navigation, and it was sometimes a case of going slow to go fast because of the rain. It was also quite slippery in some parts of the stage. It was good fun though, and my bike is running well. I’m really looking forward to the last day tomorrow. It’s gone by really quickly and I’ve had a great week with the team here in Kazakhstan.

What a great day. I opened the stage after three kilometres when Sam Sunderland made a mistake and then I stayed at the front until the end so to finish fifth on the stage is a great result for me. It’s never great to be opening a stage in the sand but I was smart and pushed the whole time and it’s really rewarding to know that my navigation is on point. It’s been a great week for the team and the focus is now on tomorrow and finishing on the podium with Ross.

A bit of a rough day for me. It was going good for the most part, and it was a lot of fun in the sand dunes and quite similar to motocross, which I really liked. Unfortunately, I tucked the front wheel and had a pretty big crash. I was ok but I broke my tower so I had no way of navigating. I then followed the wheel tracks in front of me and made it to the finish safely. Not my best day, but I felt great on the bike before my crash and I’m looking forward to tomorrow. 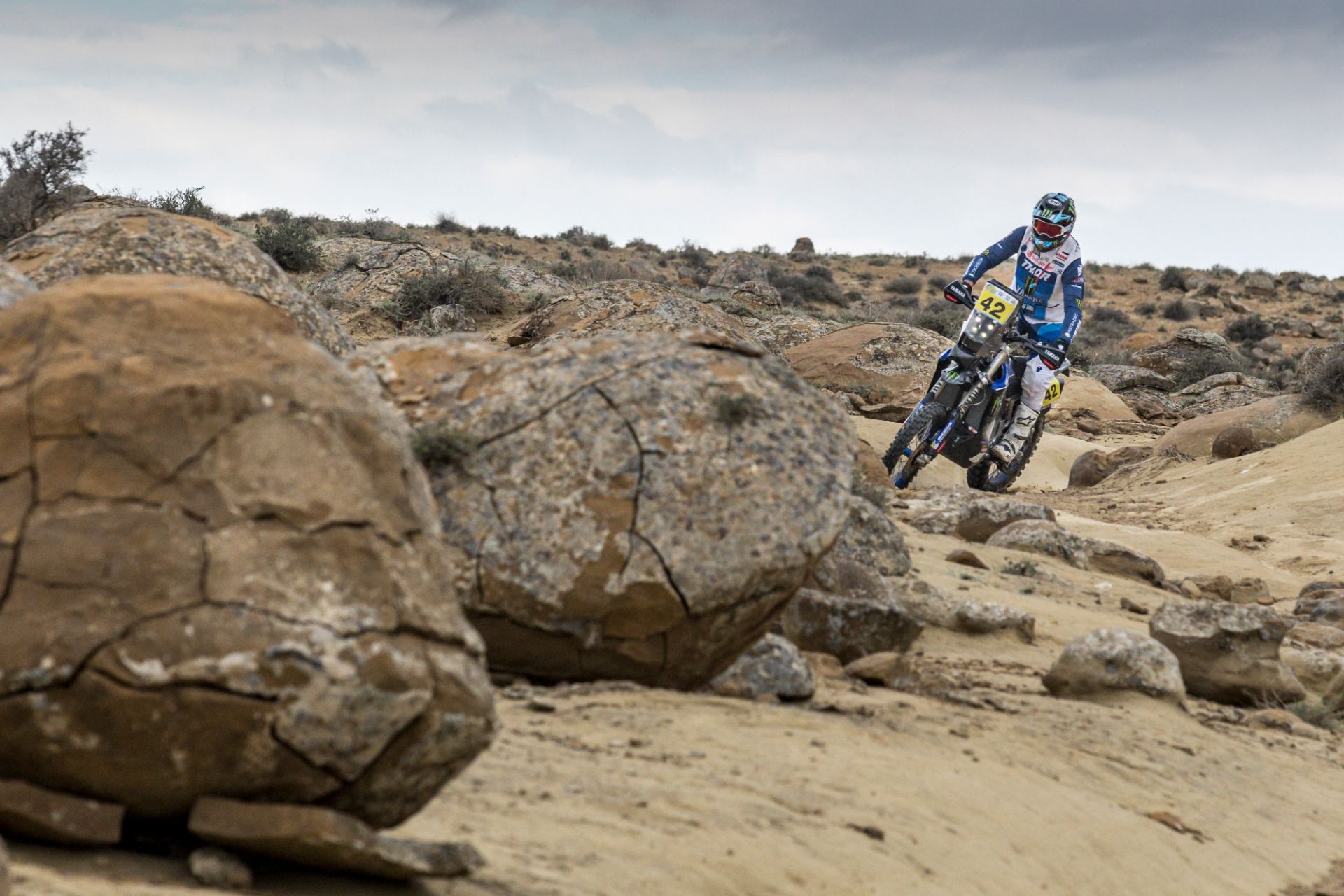