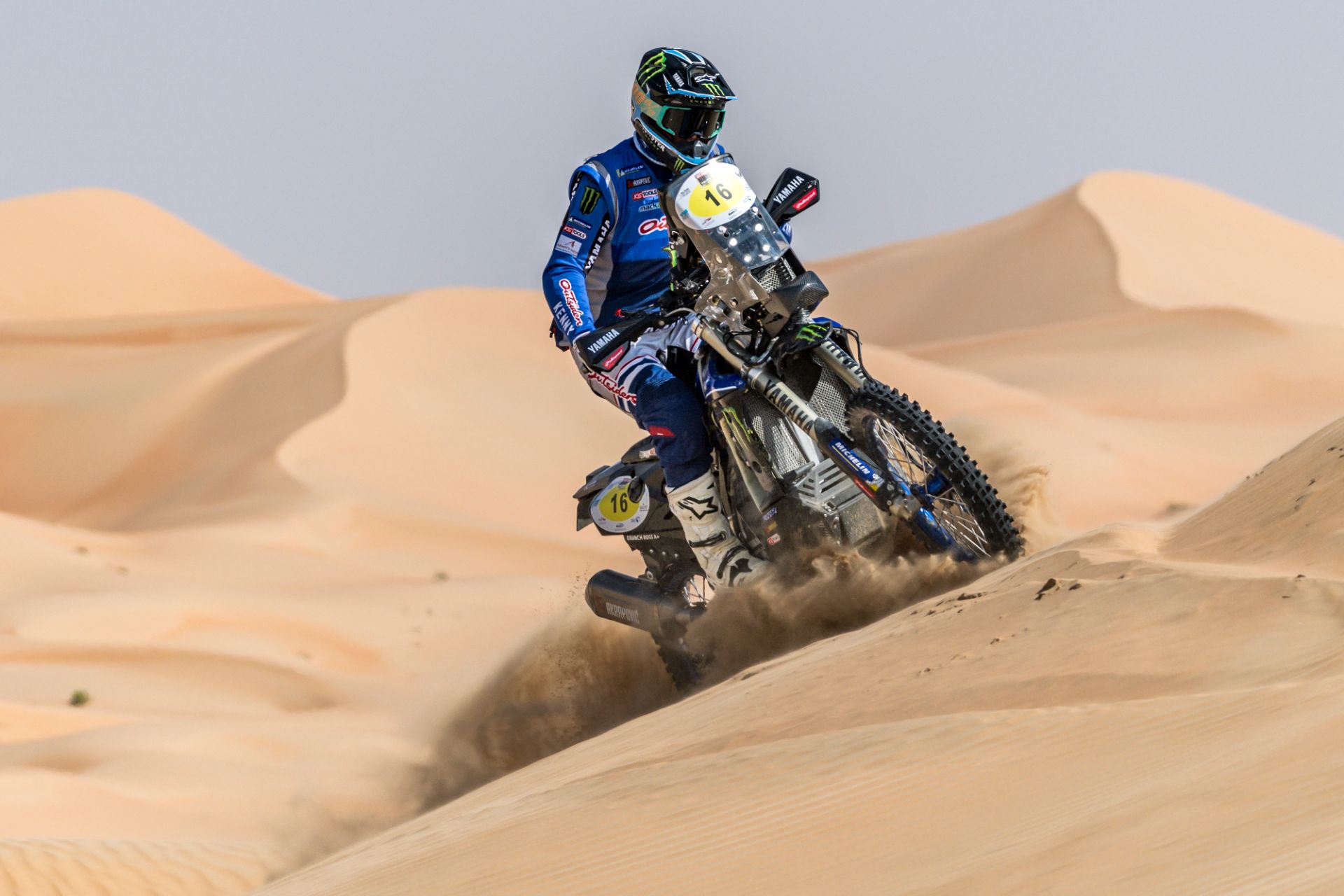 Monster Energy Yamaha Rally Team’s Ross Branch has begun the Abu Dhabi Desert Challenge in the best way possible with victory on stage one. Up to speed and confident in his ability to master the challenging sand dunes that formed a large part of the special, Branch moved into the lead mid-way through the opening stage and now lies at the top of the overall provisional classification. Rounding out a highly positive start to the event for the team, Adrien Van Beveren and Andrew Short brought their Yamaha WR450F Rally machines home in fifth and sixth place, respectively.

Stage one of the Abu Dhabi Desert Challenge saw riders navigate their way across rolling sand dunes and along desert tracks and offered quite a diverse challenge on day one of the rally. With all Monster Energy Yamaha Rally Team riders completing the 262-kilometre timed special and safely reaching the overnight bivouac, the entire team is now in high spirits ahead of tomorrow’s stage two.

Delivering a strong performance on the opening stage of the rally, Ross Branch secured the win following a tantalising battle with Matthias Walkner. Riding with confidence aboard his Yamaha WR450F Rally, the Botswana native enjoyed the high pace of the leaders through the desert and in claiming the stage victory, now faces the serious challenge of leading out on Monday’s stage two.

Posting the fifth-fastest time on stage one, Adrien Van Beveren enjoyed the testing conditions found on the opening day of the rally. Leading the stage for 60 kilometres and maintaining his strong pace throughout the 262-kilometre special, the Frenchman delivered an excellent result to finish just under five minutes behind Ross after nearly three and a half hours of racing.

Completing stage one just behind Adrien in sixth place was Andrew Short. The third and final member of the team relished the mixed terrain on his way to posting an impressive result on day one of the Abu Dhabi Desert Challenge. Content with his riding, the American now looks to pick up his pace throughout the remaining days of the rally in a bid to close in on the overall top-five positions.

With the team enjoying a positive start to the Abu Dhabi Desert Challenge, the riders are now focused on tomorrow’s stage two which brings the longest special of the five-day event, with the 470.58-kilometre stage including a 333.43-kilometre timed special against the clock.

All in all it’s been a great day today for myself and the whole team. I really enjoyed the stage, and the dunes were amazing, so it was a fun day in the desert. The pace at the front was high which was a good experience and certainly helped with my overall speed. I’ll be leading out tomorrow so I’m excited about that as it’ll be a nice challenge and hopefully, I can do a good job and stay up front.

I’m happy with today. After not such a good time in the prologue yesterday I started down the order but quickly caught up and led the stage from kilometre 100 to kilometre 160. So this was a challenge, but I enjoyed it. To finish just five minutes behind Ross is great after opening a lot of the stage and by finishing fifth, I start tomorrow in a great position to follow the lines and hopefully I can produce another strong result.

It’s good to get the first stage here in Abu Dhabi done and it was a pretty good day for me. The stage had a bit of everything, smaller dunes to start, then some desert tracks, and then towards the end there were a lot of big, rolling dunes. From tomorrow onwards I need to just find a little more speed, but I think I can find it. My bike was working great today so everything’s positive and I’m looking forward to tomorrow.