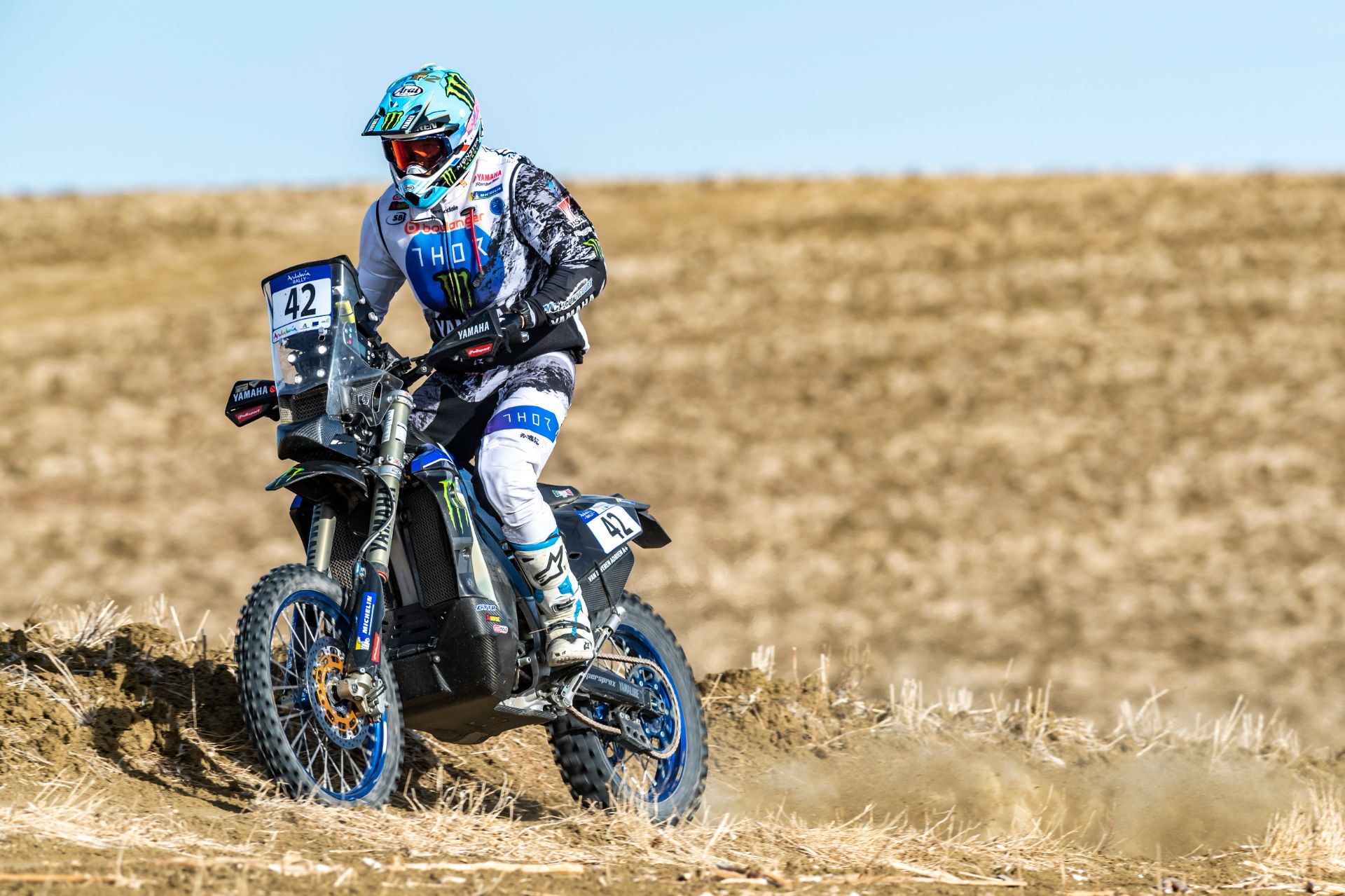 With just one day of competition remaining at the Andalucia Rally 2020, Monster Energy Yamaha Rally Official Team’s Adrien Van Beveren sits second in the event’s provisional overall classification. Enjoying another strong day aboard his WR450F Rally, the Frenchman delivered yet more precise navigation to go into the final day of competition hopeful of a podium result. Franco Caimi also finished inside the top 10 in eighth, continuing his run of strong results. Frustratingly for stage two winner Ross Branch, an issue during stage three saw him finish down in 25th position. With Jamie McCanney and Andrew Short finishing 15th and 21st respectively, all Monster Energy Yamaha Rally Official Team riders completed the penultimate stage.

Placing sixth on today’s stage three, Adrien Van Beveren put forward a calculated ride to end the day one step closer to an overall podium finish. Pushing hard from the beginning of the stage, the Frenchman opted to slow his pace during the second half to reduce any potential mistakes and ensure another strong result. Following three consistent stage finishes, Van Beveren now sits in a comfortable second place with one day remaining.

The ever-positive Franco Caimi posted another strong result on stage three of the Andalucia Rally. Enjoying the fast and flowing course on day three, Franco brought home his WR450F Rally in eighth place and advances up the leader board to fourth in the event’s classification. Positive progress for the Argentinian as the rally enters the final stage.

Following frustrations with his navigation in the lead up to stage three, Jamie McCanney rode within his limits to ensure he stayed on course. Besides one incident, which saw a number of riders getting lost, the Manxman rode a positive stage and in placing 15th, lines up for the final day in 11th place overall.

Stage three proved challenging for Andrew Short. Following a positive result on stage two where he placed sixth, Short made a costly mistake with his navigation and lost considerable time. In a bid to reclaim what was lost, the American pushed the limit and ended up off course multiple times. Bringing a frustrating day of racing to a close in 21st place, Short goes into the final stage ranked 14th.

From the highs of winning stage two, Ross Branch encountered a fuel issue on day three that proved costly for the Botswana native. Able to continue and finish the stage in 25th, the result frustratingly eliminates Ross from a potential overall podium result.

“Another good day today. I felt good on my bike and early on I pushed really hard as we have one day left and I want to finish on the podium. Halfway through I slowed my pace a little to avoid any navigational errors and I finished the stage in second so I’m really happy. I’ll approach tomorrow with the same mentality and focus and hopefully we can come away with a positive result.”

“Today I felt really good on the bike. The stage was fun, fast and flowing, so I had a really good feeling with the bike. I did have a small crash while in another rider’s dust but I was able to get up and get going again. My bike is super-good and this rally has been great for building my confidence. It’s also been a great time with the team. I’m hoping to finish with a strong result tomorrow and leave here happy.”

“It was a pretty good day although I don’t feel like my result reflects the effort that I put in. After a few roadbook issues during the first two days I decided to take it steady, especially over the hills. So I lost a little bit of time but kept on course although at one point there was a few of us that were lost. I then stopped with Ross and made a few little mistakes towards the finish but all in all it was solid. I’m looking forward to tomorrow.”

“Today was frustrating for me. My riding was good, so that’s a positive but at one point I lost direction a little bit, so I lost some time. I then tried to make it back up but made a few too many mistakes, going off course and into some trees. I was just trying too hard and paid the price. One more day so I’m hoping to finish the rally strong.”

“A difficult day but I’m healthy and ready to go again. After yesterday’s win I was on cloud nine and really confident for another good day today. But this is racing and its part of it. For sure we’ll be back in the mix tomorrow and we can go into the stage with no pressure which will be a nice feeling and try to get another win if we can.”

“It was a mixed day for the team today. Adrien and Franco had strong stages, moving them up to second and fourth in the overall classification so this is a really strong step forward for them. Both had solid navigation and a great stage. After his great ride yesterday, Ross had a technical issue and had to stop for around 30 minutes, which was frustrating. Jamie and Andrew struggled a bit today. It was heavy in navigation, but they pushed on and finished well. All riders are set up for a solid final day tomorrow.” 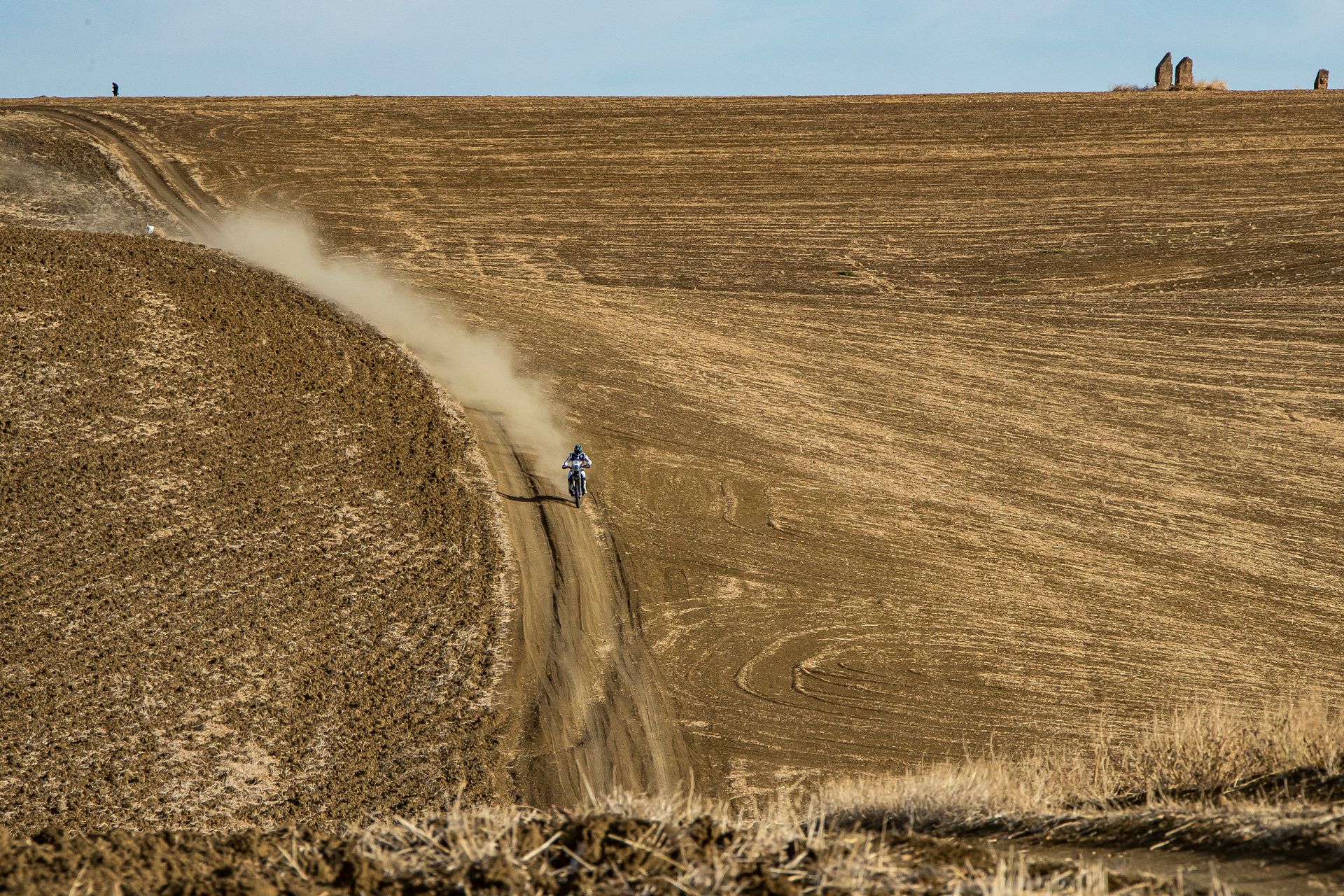