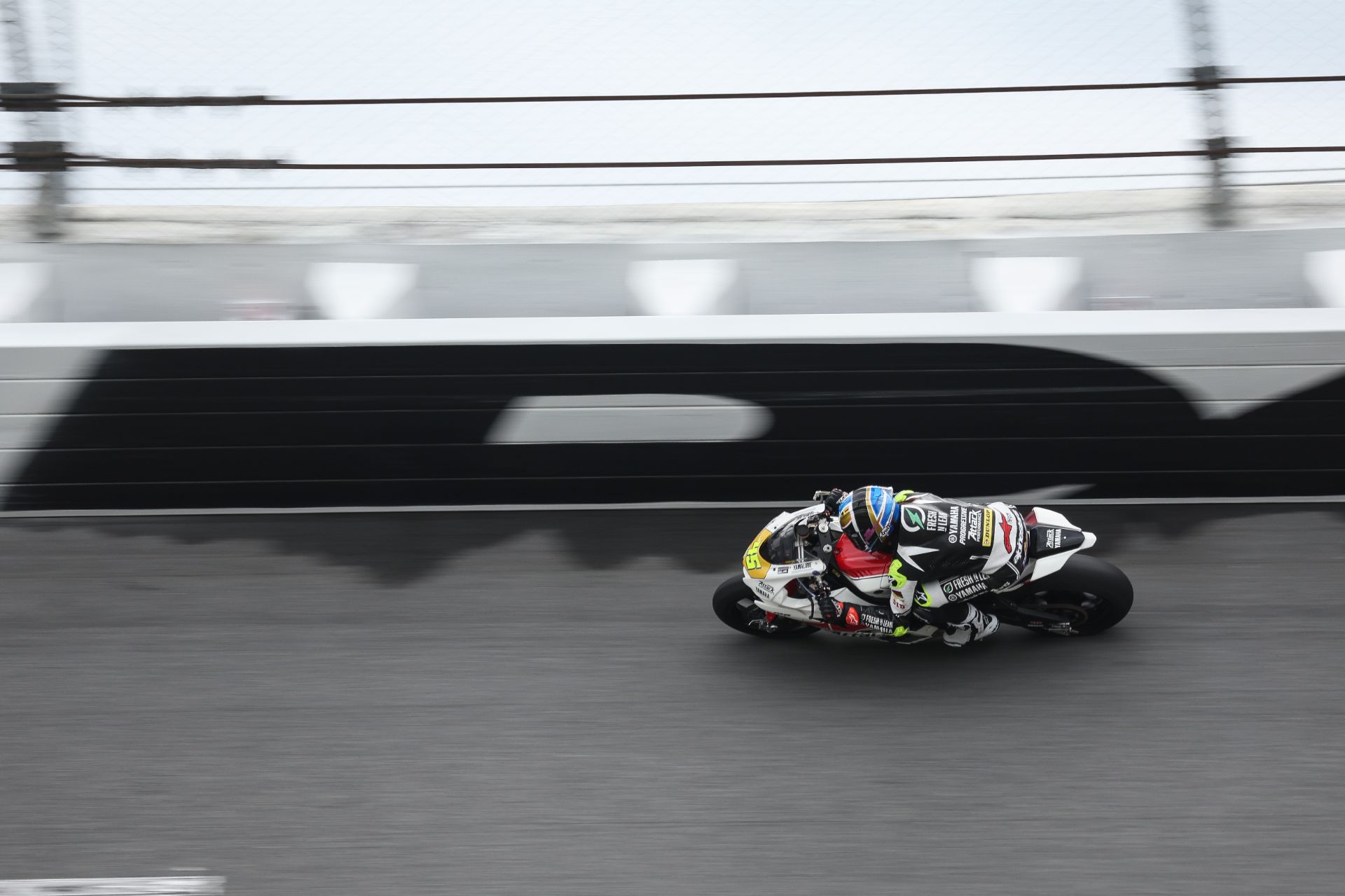 Attack Performance Fresh N Lean Progressive Yamaha’s Cameron Petersen came just shy of the MotoAmerica Supersport win in a photo finish at today’s Daytona 200 at the Daytona International Speedway. Jake Gagne had a crash during the morning warm-up and tried to race but ultimately withdrew early.

It was a lot of firsts for Petersen at the 80th running of the Daytona 200 – his first race with the new team, first time racing at the legendary speedway, first endurance race, and the first time racing a Yamaha R6 – but the South African impressed straight away. He set provisional pole on Thursday and had a solid overall qualifying result in sixth with limited track time.

Petersen got a good start from the second row of the grid and was in the mix with the lead group. He was third when the red flag was drawn on Lap 7, so he lined up on the front row for the restart. Petersen got another good start, put in some consistently fast laps, and kept his cool as riders jostled for position and exchanged the lead multiple times. After a quick second pit stop, he found himself with an over four-second lead, but in the final laps, the competition closed the gap. It came down to the wire with an exciting drafting battle to the finish line, with Petersen crossing the line .007 of a second shy of the win.

His teammate Gagne had a good qualifying effort in third to put the Attack Performance Yamaha R6 on the front row of the grid. Unfortunately, it was a rough start to the day for the defending MotoAmerica Superbike Champion, who crashed during the practice session after his pit stop. He lined up for the race to try for a good result but was just too sore and withdrew from the race before the red flag.

The team now has its eyes set on another Superbike crown as they head to the Circuit of The Americas in Austin, Texas, on April 8-10, for the MotoAmerica season opener during the Grand Prix of the Americas.

“This was kind of a shop project to show how good the R6 is, even with the new rules, and to see if it’s really competitive. It turned out pretty good. The Yamaha was very, very competitive; I think it was one of the fastest bikes on the racetrack. It led almost every lap until the end, and we just got nipped at the line. So, we’re pretty satisfied with the way the whole thing went down.

“It was definitely a very rough weekend with very limited track time and a schedule that was constantly changing with the weather, but we adjusted really well. Our team did a great job, and Cameron had a great ride. It was his first time racing here and racing an R6, so with what little track time we had and finishing second at the Daytona 200 is impressive. We are really looking forward to starting the Superbike season and expect great things.”

“Honestly, that’s the most fun I’ve ever had on a motorcycle. I didn’t know what to expect in my first endurance race, but I didn’t expect it to be like that. The first little bit of the race was like a sprint race. There were some do-or-die moves going on, but it made it so much fun.

“The team absolutely crushed the second pit stop and put us in a really good position to win the race. Then it was just a little bit unfortunate; I got stuck in no man’s land and didn’t have a tow or a draft or anybody to really work with, and then a couple of lappers got in my way. At that point, I knew that they (Sheridan Morais, Josh Hayes, and Brandon Paasch) were going to be there at the end of the race so I might as well just roll off a little bit, play it safe, and start working on my strategy to see where I wanted to put myself on the last lap so I could get that tow to the line. I honestly thought I timed it to perfection, and at the last second, Brandon got a two-rider draft and just got me at the line. I think I’m going to lose a little bit of sleep thinking about this one for a while, but I’m super stoked to get on the podium at my first Daytona 200. I’m already thinking about next year.” “It was a tough end to the weekend because we were feeling better every session, and it was nice to qualify well. This morning in the warm-up, we were just practicing pit stops and I ran off in there, didn’t have the brakes, and hit the wall pretty hard. I was just feeling beat up in a couple of different areas of my body and knew it would be tough to get back out there and race, but I wanted to at least try. I just didn’t have the strength to fight up front and didn’t really want to ride around 57 laps in the back of the pack or anything like that. We’re ready to go superbike racing, and luckily we’re in good shape for that. I’m excited to get the season started at COTA.”