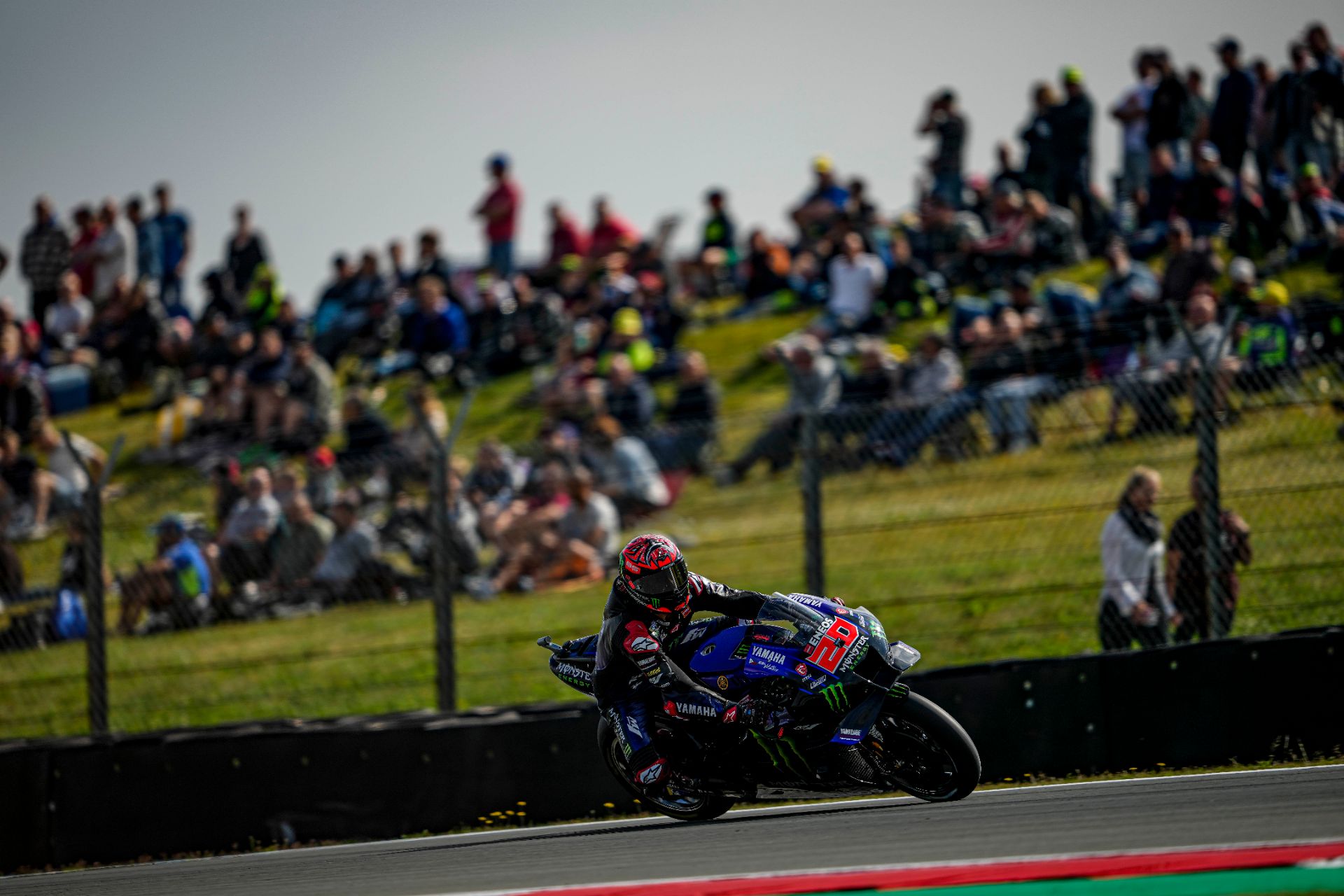 It was a day to forget for the Monster Energy Yamaha MotoGP Team. Crashes by Fabio Quartararo and Franco Morbidelli spoilt their chances to score championship points. Neither were able to finish the race.

Quartararo had a strong start from P2 and headed into the first corner side by side with Francesco Bagnaia but went a bit wide. It put him in the clutches of Aleix Espargaró. The duo battled on the opening lap, allowing the race leader to break away. The Yamaha man completed the first lap in third place, with a bit of a gap to second, but he was ready to fight back. He set a new fastest race lap on lap 3, underlining his eagerness.

But disaster struck with 22 laps to go when the Frenchman collided with Espargaró in Turn 5. He was able to rejoin the race but found himself in last place. He checked in at the pits if anything could be done and quickly headed back out again in the hope of collecting some championship points, but a second crash on lap 11 in Turn 5 again ended his race early.

Morbidelli started the race from P20 and kept his position in the opening lap. Fully immersed in the race, he waited five laps before getting in his long-lap penalty given to him for obstructing Enea Bastianini in FP2. But it was too late, and he was given a second long-lap penalty. He fell back to 23rd place.

The Italian was keen to bridge the gap to the riders in front of him. However, he too fell victim to Turn 5. Similar to his teammate, he was initially able to resume riding, but soon after retired from the race with 18 laps to go.

Today‘s results see Quartararo‘s lead in the championship standings reduced to 21 points, with his 172 points total, while Morbidelli remains in 19th with 25 points. After Round 11, Yamaha remain second with 172 points in the Constructor championship, and Monster Energy Yamaha MotoGP now are in shared second position with 197 points in the Team championship.

After a five-week summer break, the team will be back in action on 5-7 August for Round 12 of the 2022 Moto2 World Championship, held at the Silverstone Circuit, UK.

Quartararo was given a long-lap penalty sanction for the British GP following the incident involving Aleix Espargaró on lap 3. The Monster Energy Yamaha MotoGP Team put in an appeal but Race Direction was not swayed.

"I made a rookie mistake. It was only the third lap and I attacked like it was the last one. It was totally my mistake. My apologies to Aprilia and Aleix for making him go out of the track. It was a race accident. I came into the pits because I felt there was a problem, but the team told me to continue because rain was supposed to come. But we crashed again. I feel pretty lucky I haven't broken anything. I could save the first moment, but as soon as I moved, I had another one and fell. I feel a bit sore in the shoulder. But it's my fault, I could have done a better result than crash in the third lap and crash again later. I crashed only twice in the first ten rounds of the season, and today I crashed twice in ten laps. We spoke with the team before the race. The strategy was that if I was in front, I would push. If I was behind, I would try not to make any mistakes. But I did the opposite. Not something I would do on purpose. It was just a stupid mistake."

"I lost the front in Turn 5 and crashed. That was unfortunate. The biggest deal is that we need to get the right speed. And to get that with this bike, you have to be very aggressive, and that is not my way of riding. We will take this summer break to regroup and to understand it well. I will try to sort something out in my riding style to get more aggressive to make this bike work for me."

"These were results we didn‘t expect to score today. Luckily, neither rider got injured in their crashes. We started the race hoping to be able to put in a good performance. We were, anyway, well prepared for this race, but this is racing. We view the first crash of Fabio as a race incident and feel that Race Direction's decision to give him a sanction for the next race is not only harsh considering he took nobody down with him and Aleix still scored points, but it's also not consistent with race incidents we've seen in earlier GPs that were left unpunished. We will use this break to digest this GP and come back ready to fight in Silverstone in one month‘s time."