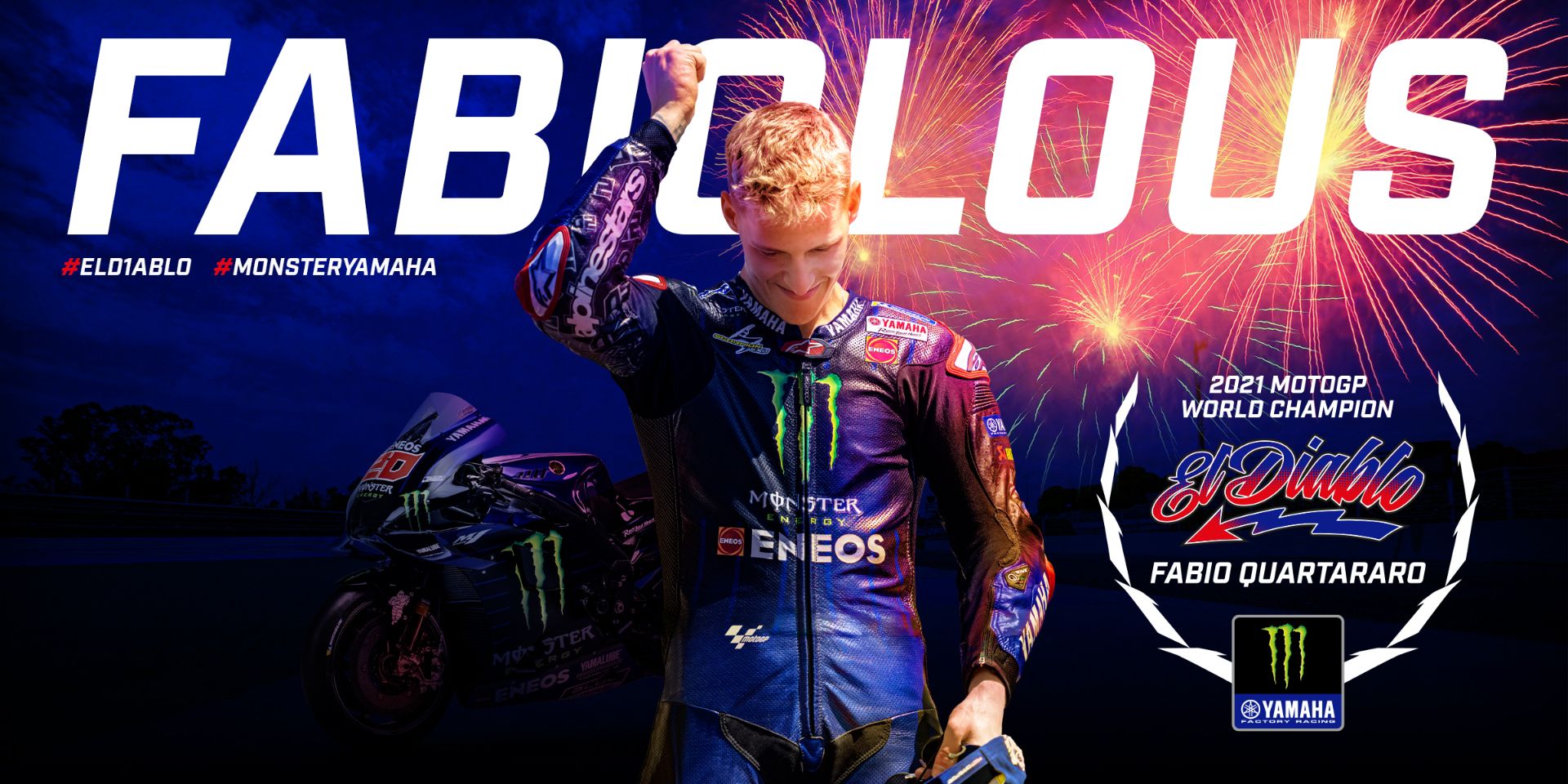 Quartararo showed he meant business early on in the season. From an opening Factory debut fifth place he went on to take a brilliant win at the second round in Qatar (Doha GP). He showed it wasn‘t a fluke at the next round, the Portuguese GP. Though the Frenchman had to cope with sudden Chronic Exertional Compartment Syndrome (CECS or ’arm pump‘) at the Spanish GP and a subsequent surgery, he didn‘t let it hold him back. He went on to score eight more podiums (French GP, Italian GP, German GP, Dutch GP, Styrian GP, British GP, San Marino GP, and the Americas GP), including three wins (Italian GP, Dutch GP, and British GP).

Quartararo‘s achievements combined with his teammates‘ efforts have also helped keep both the Monster Energy Yamaha MotoGP Team and Yamaha in contention in this year‘s Team and Constructor Championships with two rounds remaining. Quartararo and Franco Morbidelli (his former teammate in 2019 and 2020 with PETRONAS Yamaha SRT) reunited at the 2021 San Marino GP in the Monster Energy Yamaha MotoGP garage and are keen to fight down to the wire for the Team and Constructor Titles until the last MotoGP round in Valencia.

"First of all, I want to congratulate Fabio whole-heartedly. We already knew he was an exceptional talent who understands how to get the best out of the YZR-M1 and shares Yamaha‘s ability to think and dream big – and now he has made his dream come true through hard work, passion, and exciting yet clean racing.

"We are thrilled that we have achieved this shared goal together. Grand Prix racing makes up a large part of Yamaha‘s heritage. Yamaha Motor Company was born from ’racing DNA‘, and this racing DNA is also present in our consumer products. Yamaha had a clear objective for this year: we strived to be back at the pinnacle of Grand Prix Motorcycle racing. With Fabio we‘ve secured five Grands Prix victories and ten podiums, and after a six-year period we have won the MotoGP World Championship again – a superb achievement. Moreover, to do it in such a competitive field is an achievement we can be proud of.

"On behalf of Yamaha, I would like to sincerely thank all our sponsors and partners, without whom none of this would have been possible. They have cheered on Yamaha through these last two difficult pandemic-affected MotoGP seasons, and this championship victory is therefore also very much theirs.

"The last two years have further underlined what a source of joy MotoGP and motorsports are in general to a vast audience. To many people the GPs were highlights during an otherwise dark period. I would therefore also like to take a moment to thank the fans around the world for their unwavering support, and also the Yamaha staff who this year again made significant sacrifices to adhere to Covid regulations – which meant often being away from home for weeks on end – and who unfailingly worked with 100% dedication towards the goal of becoming World Champion.

"Since its founding, Yamaha has always been striving to bring every Yamaha rider the feeling of 'Kando'; a Japanese word for the simultaneous feelings of deep satisfaction and intense excitement that we experience when we encounter something of exceptional value. This championship win is truly one of those moments: it‘s a milestone that will bring joy to many, as Fabio‘s fan base, like Yamaha‘s, is growing."

"I‘m extremely happy to congratulate Fabio on securing the Championship Title already in Misano. We asked Fabio to join the Factory team in 2021 because we knew full-well the extent of his talent. However, he managed not only to meet our expectations but even exceeded them.

"Fabio had obviously always dreamt of becoming a Factory rider and was very excited about what the future would hold, but the change of garage required some adjustment. He had to get used to a new team whilst simultaneously handle the added media pressure of being a Factory Team rider. Fabio had no trouble gelling with the team and finding speed on the Factory YZR-M1, and soon he secured his first two wins in Doha and Portimao. Right then we knew this year could be something special, but disaster struck in Jerez. Fabio had to cope with arm pump problems and a surgery quite early on in the season, a crucial time for a serious championship contender. This could have been a severe mental blow, but yet again this didn‘t faze him. He underwent it heroically and managed to show up at the very next GP ready to fight for the podium again.

"His mental fortitude really impressed us, and it resulted in him finishing no lower than eighth on ’bad‘ race weekends, except for when he had arm pump in Jerez, and even then he took 13th. He didn't finish outside the points once so far this season.

"These statistics speak for themselves. They show that Fabio doesn't leave a stone unturned yet manages to not let the pressure of a possible championship title get to him. He fights and beats the opposition fairly, purely on talent and race craft. And last but not least, he walks the tight line between relentless dedication to winning and improving while also having fun on the bike, a quality that our team has witnessed before with Yamaha‘s most successful premier class rider Valentino Rossi.

"This Rider Title is special because it has been achieved through great synergy between Fabio, the team, and Yamaha. I would like to thank and congratulate the members of the Monster Energy Yamaha MotoGP team working directly with Fabio as well as the engineers of Yamaha‘s Motorsports Development Division in Japan and Yamaha Motor Racing‘s European based staff. All of Fabio‘s great achievements are a testament to their hard work. The big question that now remains is whether we can also win the Team and Constructor titles… With just two rounds to go we will surely give it our 100% for a thrilling climax to another incredibly competitive MotoGP season."

"I still can't believe it! I can't even talk... It feels amazing. Maybe later I can talk a bit more. Right now, I'm living the dream! It feels good to also have my family with me, and we will enjoy this a lot tonight and until the end of the season.

"Of course this was not the way I wanted Pecco's weekend to end, but I'm happy he's okay. Now we are the World Champion. I have no words and I have no more liquid left in my body to cry. It feels so good, but I can't even describe what I'm feeling right now. To be on the podium with a big part of my family and my family from the circuit - I have no words.

"MotoGP has been going on for quite a long time. To be the first Frenchman to win it is amazing. I'm also happy for Yamaha. Since 2015 they didn't win a title, and today we won it again. It's an amazing feeling!"