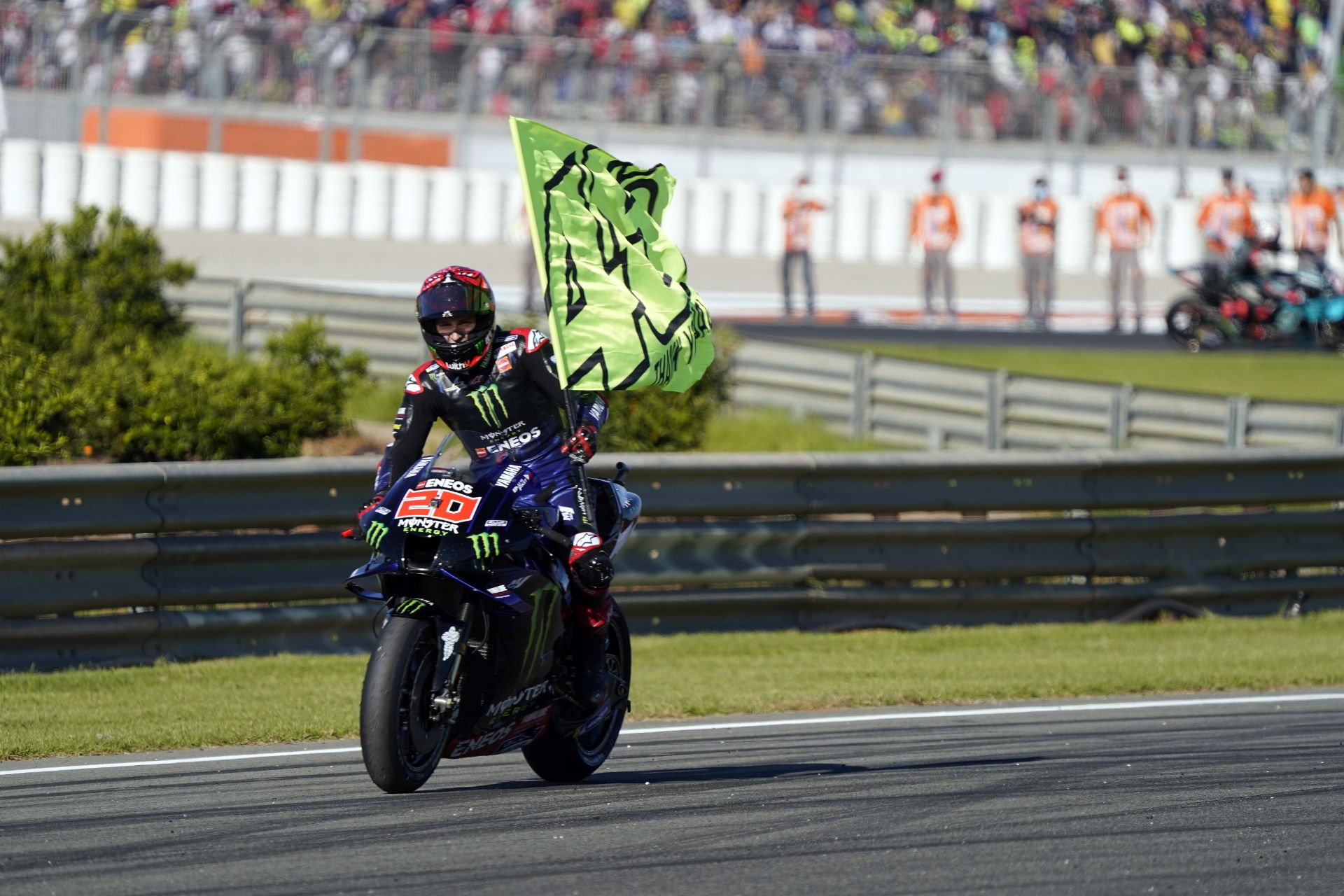 Monster Energy Yamaha MotoGP‘s Fabio Quartararo and Franco Morbidelli fully enjoyed today‘s Gran Premio de la Comunitat Valenciana. Quartararo had a strong start to the race at the Circuit Ricardo Tormo and cruised on to a solid fifth place. Morbidelli had the best seat in the house for the emotional ’last dance‘ of Valentino Rossi, riding directly behind him for the majority of the race. The Factory Yamaha man finished behind The Doctor in eleventh place.

Emotions were running high at the Circuit Ricardo Tormo today. The Gran Premio de la Comunitat Valenciana marked the last race day of MotoGP icon Valentino Rossi – a day no racing enthusiast will ever forget. Monster Energy Yamaha MotoGP‘s Fabio Quartararo and Franco Morbidelli were keen to impress on the momentous occasion. They rode to a strong fifth and eleventh place respectively.

Quartararo had a good opening lap from eighth on the grid. He had said he was going to try to make up positions on the opening lap and stuck to the plan. He manoeuvred himself in sixth place which he held as the pack went over the line for the first time.

As the field started to pull apart, El Diablo tagged onto the back of the leading group. The Frenchman soon piled on the pressure on Jack Miller. After a couple of look-ins left and right, he made it stick on lap 5, moving into fifth position. But the fight with Miller wasn‘t over, and they swapped positions again on lap 9. Quartararo skilfully balanced tyre management and speed for the remainder of the race. With Alex Rins crashing out on lap 11, the number-20 rider moved up to fifth, a position he held to the chequered flag, with a 5.439s margin to first.

Morbidelli started from eleventh on the grid and found himself in the busy mid-pack. He completed the first lap in thirteenth place. With Takaaki Nakagami and Rins crashing out of the race, he moved up to eleventh, shadowing his mentor Valentino Rossi, who was riding the last race of his illustrious MotoGP career in tenth position.

Though still not 100% fit, the number-21 rider was able to match the pace of The Doctor for the entire race length, showing the progress he has made since joining the Factory Yamaha MotoGP Team after his knee surgery. He had the best seat in the house for number-46‘s last dance and finished the race in eleventh place, 14.085s behind the race winner.

After today‘s results, 2021 MotoGP World Champion Quartararo has accumulated 278 points in total. Morbidelli earned 5 points but remains in 17th place with 47 points. Monster Energy Yamaha MotoGP are second in the team title standings with 380 points and a 53-point margin to first. Yamaha's end total of 309 points secured them second in the constructor championship, with a 48-point disadvantage to first and 69-point margin over third.

The Monster Energy Yamaha MotoGP Team thank all sponsors and partners as well as the fans for their invaluable support this season. The team will be back in action on 18-19 November for the first 2022 winter test at the Circuito de Jerez.

All of Yamaha Motor Co., Ltd., Yamaha Motor Racing Srl, and Monster Energy Yamaha MotoGP staff want to express their gratitude to Valentino Rossi. They all enjoyed the amazing 16 years he spent with Yamaha and his top-10 result is yet another special memory that they will cherish. #GrazieVale

"To be honest, I‘m satisfied because we were in a bad situation when we started on Friday morning, but we achieved quite a great pace today. We changed the bike in Warm Up this morning and that made it a bit better. It wasn‘t easy, but we achieved something that‘s pretty great. I wanted to have fun today more than wanting a good result, and I had fun today. So, I‘m super happy, because even if it wasn‘t the perfect weekend I hoped for, we were able to get a top-5 result. I enjoyed the race, and we finished the season in a good way."

"I was lucky enough to enjoy Valentino‘s last laps for the whole way as I was riding behind him. I feel really lucky for that. Before the race, I wanted to stay as far as possible from him. I didn‘t want to be involved in anything that could upset his final race, but when I found myself behind him, I just enjoyed it. I tried to push him and stay behind him. It was really, really fast, and difficult to overtake. At the end of the race, he made a step also, he accelerated his pace – it was just amazing! I feel really lucky, and it was a really nice race."

"Overall, it was a difficult weekend, more than we could have expected. Fabio was able to get a good result considering his starting position. We found a setting on the bike for him that paid off. We‘re quite satisfied about that, but we finished 5 seconds behind the race winner. That will be the fuel for our motivation during the wintertime, to be stronger next year, which is already starting next week at the Jerez Test. But first there's tonight‘s MotoGP Gala where we can celebrate Fabio's championship win in his debut year with our team.

"Franky did a consistent race. We know his physical condition isn‘t back to his former form yet, but during this race he was able to keep a good pace from the beginning to the end. For sure he will be using the off-season to train so he can start the next season very competitively.

"We are all so happy for Valentino that he was able to finish his epic career with a top-10 result today. He did it at a track where he usually struggles a bit. But this time he had a great weekend and proved once again why he is called the ’Greatest of All Time‘. That‘s exactly what he is. We had the pleasure to work with him for many years. We will forever keep the amazing memories he gave us and wish him all the best. Ciao, Valentino!"