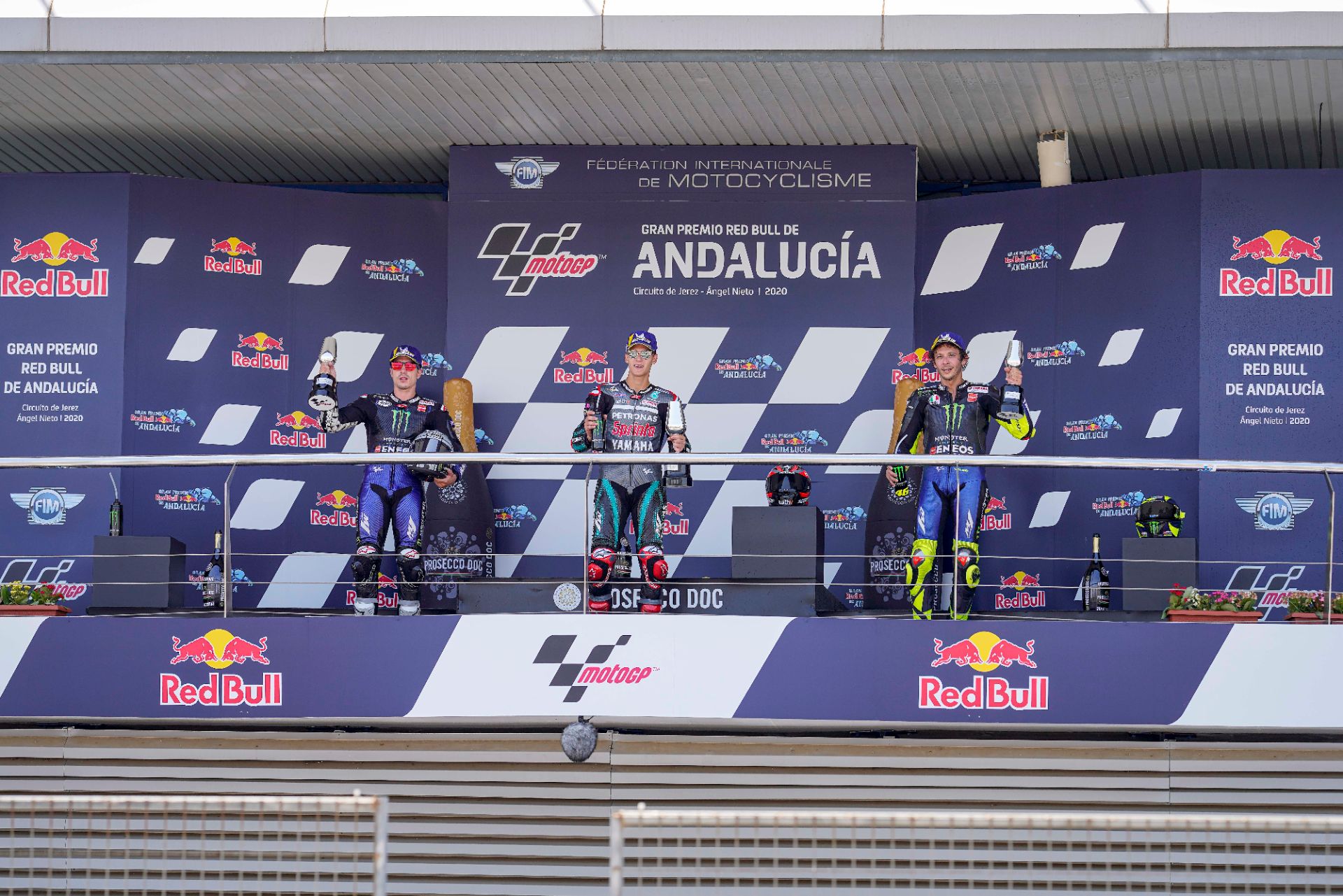 The staggering heat at the Circuito de Jerez-Ángel Nieto (Spain) today proved to be the biggest challenge for Monster Energy Yamaha MotoGP’s Maverick Viñales and Valentino Rossi. The pair powered through despite extremely high temperatures and secured second and third place respectively.

Viñales had a good start from second place and immediately put pressure on Fabio Quartararo in the lead. He was right on his tail and decided to launch his first attack in the final corner of the first lap, but he went wide and as a result crossed the start-finish line for the first time in third place.

The heat then took its toll on the Spaniard who started to struggle for breath. With 17 laps to go the rivals behind him were insisting on a fight for third place. The Factory Yamaha man held firm on their first try, but later he outbraked himself in Turn 6 and had to let Francesco Bagnaia through. Now in the busier part of the rider field, he dropped back to sixth, but he kept close knowing the race was far from over.

With track temperatures over 63℃ in certain places on the track, the number of NC scorers went up. The local hero found himself behind Rossi fighting for second place in the final five laps. He had been saving his tyres especially for this scenario and put them to good use, giving the fans a bit of extra entertainment before crossing the line in second place, 4.495s from first.

Rossi had a dream start from fourth on the grid, slotting into third place right behind his team-mate, making it an early Yamaha 1-2-3. He was right on the pace and picked up another place when Viñales went wide in Lorenzo’s corner in the opening lap. The Italian was unable to stick with Quartararo, but he masterfully defended his second place from his stable mate.

With 13 laps to go the number-46 rider lost a place to Bagnaia, and he then came under pressure from Franco Morbidelli but refused to let go of his podium glory. The Doctor had not climbed the rostrum since the 2019 Americas Grand Prix, and he wasn’t going to be stopped now.

The vastly experienced Yamaha man was on the limit for the entire 25 laps but careful never to go over it. He had regained second place on lap 20 when Bagnaia suffered a mechanical failure. The race finale was a battle with his team-mate for second place. Rossi defended his position for as long as he could and concluded his heroic ride in third place, 5.546s from the front. This third place is his 199th premier class Grand Prix podium.

Today’s success of the Monster Energy Yamaha MotoGP Team earned Yamaha a 1-2-3 result (its first since the 2014 Australian GP: then with Rossi, Jorge Lorenzo, and Bradley Smith). It also contributed greatly to the 2020 championship standings. Viñales’ second place keeps him second in the rankings, with 40 points in total, 10 points from first. Rossi recovered strongly, climbing up from P18 to P6, with 24 points between him and his team-mate. Yamaha remains first in the constructor standings, and Monster Energy Yamaha MotoGP jump up to second in the team classification.

MotoGP will be back in action in two weeks’ time for the Monster Energy Grand Prix České republiky, held at the Automotodrom Brno from August 7-9.

Actually, in this race it was impossible to breathe. First of all, in the first lap I tried to overtake Fabio to get the clear track, because I felt very strong with the bike, but then I went wide and Fabio and Vale overtook me. Then I was stuck behind Vale, and I couldn’t breathe most of the laps, I was destroyed. I don’t know why, maybe because of the heat coming from the other bikes, but I couldn’t do more. I was saving something for the last five laps, and I pushed at the end when I had a good rhythm again. I mean, today I lost it in the first lap, if not it would have been a much better race.

I’m very happy because it’s been a long time since I was on the podium. We’re coming back from a bad period with bad results. So this weekend we started working in another way. I’m very happy with the work David Muñoz did, and the rest of my team also did a good job. I was able to make a good lap at the start, and after that the race was so long. But I’m happy to be back on the podium. For me it’s not quite like a victory, but it’s similar.

Obviously, I’m extremely happy to have this lockout podium with three Yamahas in the top 3 today, that’s fantastic. It’s great to see Valentino bounce back after a very difficult first weekend here in Jerez, and to come back this week and arrive on the podium is a really great achievement. Maverick, at the same time, gave a very solid performance. Two times in a row he came second, so 40 points for him in the first two weekends is a great result. Fabio won his first Grand Prix in the previous weekend and showed again today that he is on top form at the moment. Having three M1-riders finish on the podium is of course an exceptional result. We have a lot of work ahead of us to maintain our lead in the championship, but we’re on the right path.

First of all, both our riders deserve a pat on the back and our full respect. Today’s conditions were so tough, both on the riders and the bikes, and Maverick and Valentino really had to go all out, riding on the absolute limit of what’s humanly possible. We are very happy to have both of them on the podium. It’s especially nice because it’s been a while since Valentino got to enjoy the view from the rostrum, and to do it in such a difficult race just underlines how he’s still at the top of his game. I’m sure Maverick would have liked to fight for the win, but today that was just not in the cards for us. We have to congratulate Fabio on his win – it’s a Yamaha 1-2-3 today! This is very encouraging for everyone who was involved in preparing for the 2020 season start. I think today's 1st, 2nd, and 3rd place was the best way for us to thank all the people involved in Yamaha's MotoGP project. We now have gained good momentum, and we hope to keep it going in Brno in two weeks’ time.