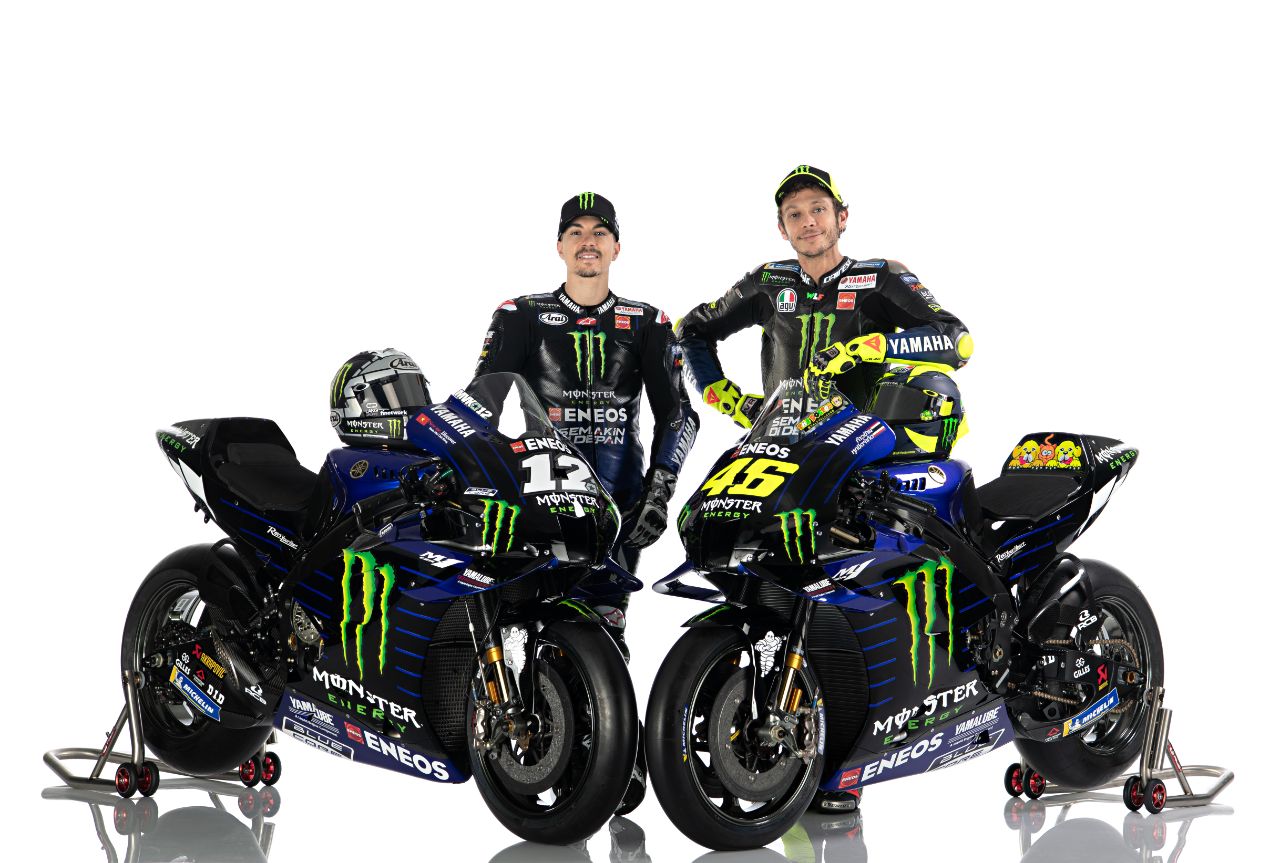 The Monster Energy Yamaha MotoGP Team opened their garage doors at the Sepang International Circuit in Malaysia today to show the set-up for 2020. In the upcoming MotoGP season, the Yamaha Factory Racing MotoGP Team will again be competing with riders Maverick Viñales and Valentino Rossi and continue their close relationship with title sponsor Monster Energy Company.

The Monster Energy Yamaha MotoGP Team staged a team presentation event today at the Sepang International Circuit. To celebrate the start of the 2020 MotoGP season, the team let the media into their pit box for a photo opportunity and held a special press conference.

By opening the doors to their garage for the photo opportunity event, the team offered the media and the fans watching the live stream a good look at the world of Monster Energy Yamaha MotoGP. Factory riders Maverick Viñales and Valentino Rossi were both present and sat on their Yamaha YZR-M1s, making everybody all the more excited to kick off the three-day official 2020 IRTA MotoGP preseason test in Sepang, Malaysia, that will start tomorrow.

Viñales joined the Factory Yamaha crew in 2017 and immediately took third place in the rider standings that year. Though the 2018 season proved to be tough, the Spaniard kept his motivation high and won the race at Phillip Island. He finished that season in fourth place overall, just five points behind his teammate in third position. In 2019, he scored two further Grand Prix victories, one in Assen and one in Sepang, and collected the overall bronze medal once more at the end of the season.

Rossi is famously Yamaha‘s most successful rider. This will be his 15th season with the manufacturer since he first joined the Factory Team in 2004. The nine-time World Champion won four championships with Yamaha in 2004, 2005, 2008, and 2009, and is as eager as ever to score GP victories as he enters his eighth consecutive year with Yamaha since his return in 2013.

Yamaha has a long-term global alliance with the team‘s title sponsor, Monster Energy Company, based on their mutual passion for racing. A multiple-year title sponsor agreement with the Yamaha Factory Racing MotoGP Team was signed in the summer of 2018 and came naturally, as Monster Energy Company sponsors multiple Yamaha teams (among them the Yamaha Factory Racing MotoGP team since 2013) and riders (including Viñales and Rossi) in various racing classes.

The team is also pleased to announce that throughout the 2020 racing season the bike will continue to feature the slogans of Thai Yamaha Motor Co., Ltd., Yamaha Motor Vietnam Co., Ltd., and Yamaha Motor Philippines, Inc.

Newly confirmed Yamaha Factory Racing MotoGP Test Team rider Jorge Lorenzo also got a moment in the spotlight. He already made his first kilometres on the YZR-M1 in the shakedown test held on 2-4 February 2020, after a three-year interval. He completed his first test with satisfactory results, and his vast riding experience is expected to be a huge asset to Yamaha‘s engineers over the course of year.

The team continues to support Yamaha‘s bLU cRU programme, encouraging a younger generation of on-road riders to follow their dream to become the next MotoGP star. Viñales and Rossi continue to be ambassadors of the programme and will serve as role models for the riders in lower classes.

Today we officially ’introduced‘ the 2020 Monster Energy Yamaha MotoGP Team line-up. Monster Energy has been a team partner since 2013 and it was just 12 months ago in Jakarta when they stepped up to become the main sponsor of our Factory MotoGP Team. We have thoroughly enjoyed working closely together throughout the first year and we are now ready to further expand our collaboration and achieve greater sporting successes in this second season. The 2019 bike design and team ’look‘ was very well received by both Monster Energy and Yamaha fans around the world, so we decided to keep the strong image unchanged for 2020. However, that is the only thing that remains unchanged. If you scratch beneath the surface you will find many changes that Yamaha and the team have made to improve the bike, the performance of our riders and the total working efficiency of our team. We are excited to start this new season, and we believe we can achieve great things this year.

After the winter break it‘s nice to have the entire team together again for the first time in months. It has that same buzz as the first day of school. We are about to start the 2020 preseason testing period, which is always a crucial and busy time for the team. Yamaha‘s Japanese engineers have dedicated a lot of time and effort to developing the M1, and now our riders and engineers will put the new items to the test for the first time. At the Valencia and Jerez tests at the end of last year we already got a sense of in which direction we‘re heading. During the upcoming test we will be looking to confirm our earlier findings and search for further areas of improvement, so we can start the 2020 season in March in the best shape possible.

At the end of last season we were in decent shape, so I‘m really excited to start working again on our goal to get the title and as many wins as possible. For sure, I‘m looking forward to riding my M1 again. The last time I rode it here in Malaysia was during the 2019 season and we won. It‘s a really positive memory and it also means we have a good starting point here in terms of set-up, so we should be able to get straight to work tomorrow on Day 1 of the Sepang Test. I‘ve used the winter months really well. I‘ve done a lot of physical training and riding to make sure my body and mind are in top shape. We need to work hard and be focused on our goal right from the start, so that‘s exactly what we‘ll do! 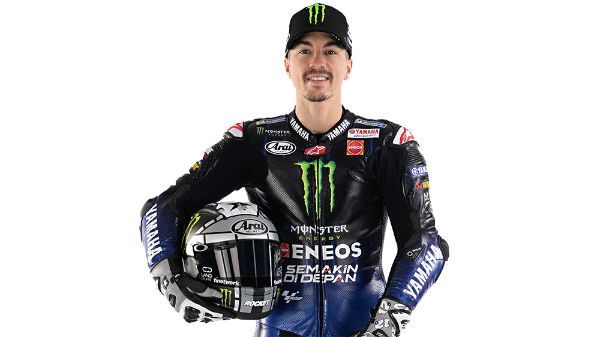 For some reason the winter months always seem a lot longer than the summer months during the MotoGP season – those seem to just fly by! Anyway, I‘m happy to be on track and to start riding again. I‘ve been able to relax during the stop and also do some fun riding events, but now it‘s time to get serious about 2020. I‘m very curious to see what steps we can make during the Sepang Test. For sure, Yamaha have prepared some new things for us to try, and anyway the first laps of the year on a MotoGP bike after the winter break are always a unique sensation – it‘s always something I really enjoy. For sure we have a lot of work ahead of us, but the team and I are ready for it. 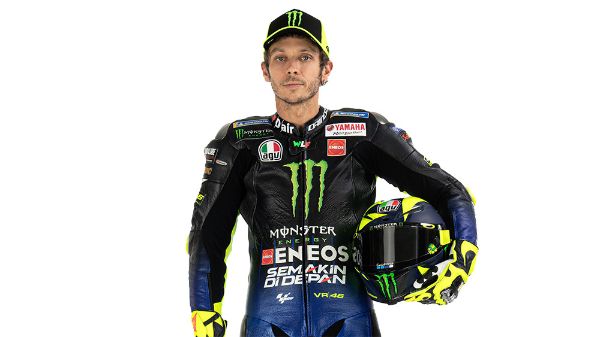