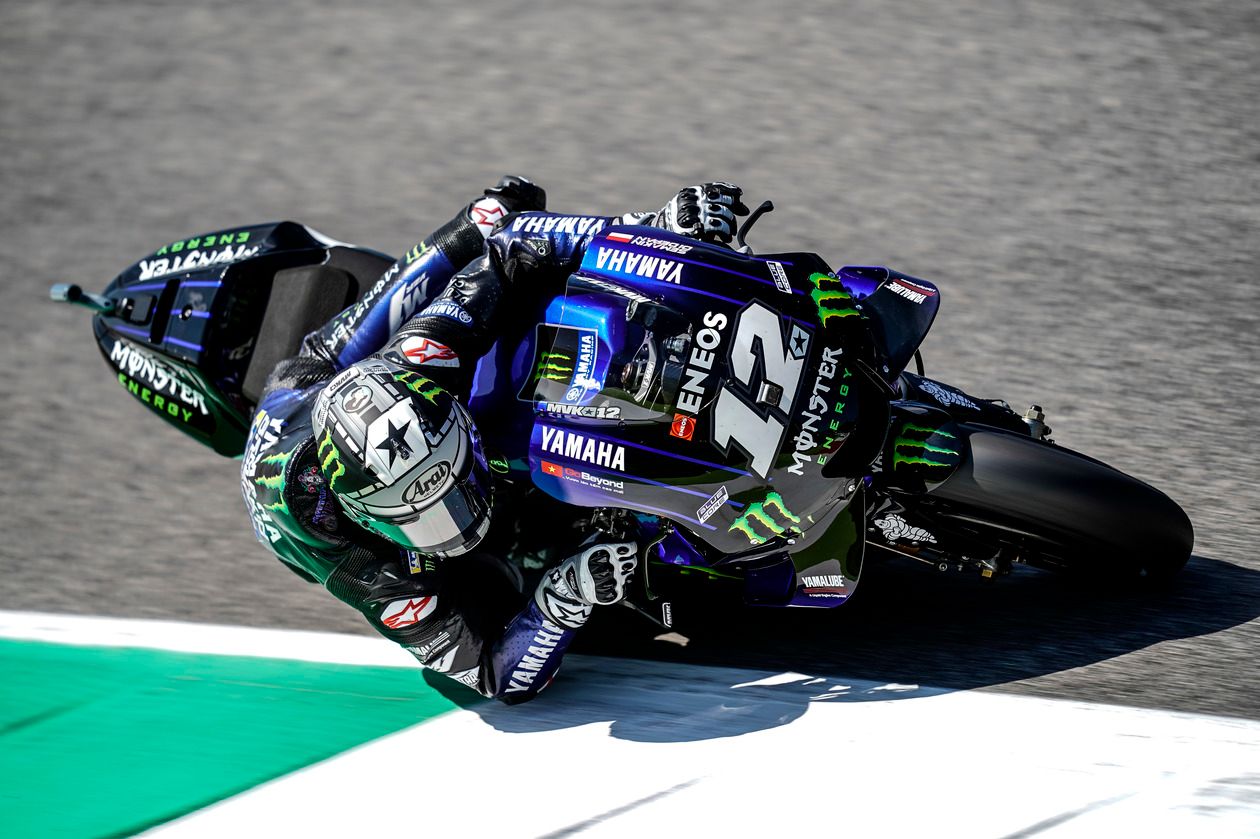 Just a few days after a superb win in Assen, the Monster Energy Yamaha MotoGP team resumed the action at the Sachsenring circuit today. Despite tyre degradation and grip issues, Maverick Viñales and Valentino Rossi showed an encouraging pace in FP1 and continued to up their speed in FP2, finishing in fourth and tenth place respectively in the combined free practice timesheets.

Still elated about last Sunday‘s victory, Viñales showed he was able to find a good pace right from the start of the German round. He needed little time to adjust to the Sachsenring lay-out, showing steady rhythm as he worked on the base setting. He clocked a 1‘22.251s half-way through and held fourth position for a long time. However, as the Assen-winner didn‘t put in a hot lap in the final stages, he was ultimately pushed down to fifth place, ending the session 0.861s from first.

The Spaniard was eager to show the same strong pace in the afternoon and did just that. He spent the majority of the available time preparing for tomorrow‘s hot qualifying day, all the while featuring in sixth or seventh place, but this time made sure to take part in the mini shoot-out and post a fast lap at the end. He clocked a 1‘21.193s on his penultimate lap to take fourth place in the FP2 and the combined timesheets, 0.488s from first.

Rossi‘s motivation to make a strong start to the German GP was through the roof, and it showed. He carried a competitive pace right from the get-go and settled into the top six for the whole of the morning session. The Italian kept working on his bike and showed the progress he made when setting a 1‘21.967s lap that put his YZR-M1 briefly in second place, before being pushed to third, 0.574s from the top.

The Doctor continued the positive feelings in the afternoon. As the sun came out at the German track, the Yamaha rider was determined to better his time. He focused on fine-tuning his bike‘s settings, all the while maintaining his provisional top-10 position. In the usual mini time attack, Rossi set a 1‘21.538, ending the day in tenth place, 0.833s from the front, both in the FP2 and the first day results.

I think it was a very positive day. Even though I didn't feel great on the bike because the grip level was low, our lap times were pretty competitive. I tried to ride with a race set-up to find out which direction to take in preparation for the first few laps. We tried the tyres as well and know more or less what our feelings are for tomorrow, so tomorrow instead we can focus on riding style and improving some more, especially in sector 2. At one point I had a fresh tyre and I was ready to push really hard, but then in the third corner I was held up by some other riders. It's important to pay attention to what's happening on track at such a narrow circuit. Sometimes one bad lap in FP3 can make you go to Q1.

Today was not so bad, especially my feeling with the bike and my pace are quite good with the race tyres, so I'm quite competitive. Unfortunately, with the soft tyre at the end, I didn't make a very good lap and I didn't improve much. I expected to be more towards the front, now I'm just in tenth position, but the pace is quite good, this is the most important thing.

After the last race, we expected the first two sessions to go a bit better, especially since this track suits our bikes. This morning we suffered a lot of front tyre degradation and also the rear grip wasn't as good as we expected. Due to this, we spent most of our time comparing all the tyre specifications, both front and rear, to get a clear understanding of where we would stand for the race. Though our riders showed good pace and we managed to achieve our target of having them in the top-10, we still have some work to do, because the gap to first needs to be reduced. It didn't help that both Maverick and Vale were disturbed by other riders during their time attack, so we will have to work hard in FP3 to make up for it.