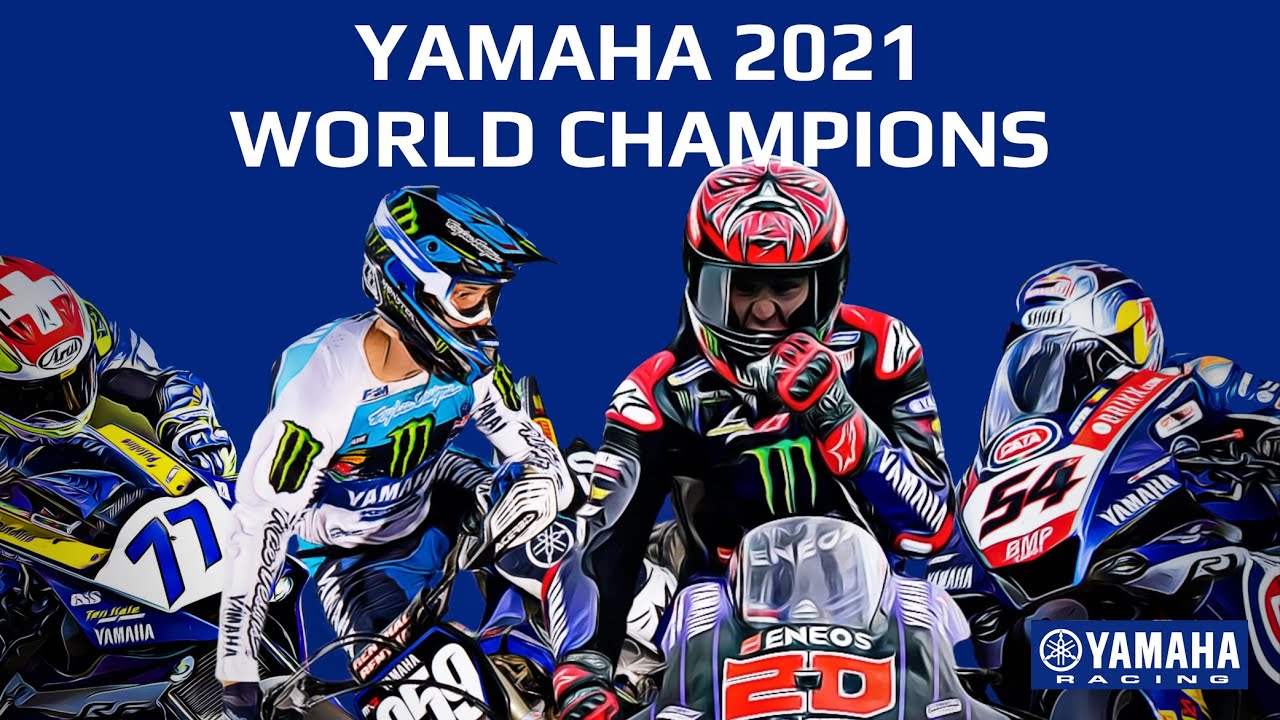 In MotoGP, Fabio Quartararo’s five victories and 10 podium finishes ensured he claimed his maiden title in only his third premier class season at the Valencia finale and his first with the Monster Energy Yamaha MotoGP Team. This exceptional achievement saw him become Yamaha’s first MotoGP champion since Jorge Lorenzo in 2015, while he represents France’s first-ever top-class title-winner. The 22-year-old is also Yamaha’s seventh different champion and their youngest-ever in the series.

Maxime Renaux continued his meteoric rise with Yamaha, and thanks to five Grand Prix victories, 10 race wins, 24 top-three finishes, and 14 podiums, the Frenchman was crowned the 2021 FIM MX2 World Champion in his maiden season with the Monster Energy Yamaha Factory MX2 team. It was the 21-year-old’s third year in the championship on board the YZ250FM, and alongside teammates Jago Geerts, who finished second in the standings, and rookie Thibaut Benistant, Yamaha also claimed the manufacturers’ crown.

The 2021 WorldSBK Championship hosted one of the greatest title battles of all time. Toprak Razgatlıoğlu and six-time champion Jonathan Rea battled all season long, but it was the Turkish star who would prevail in the end. He became Yamaha’s first riders’ champion since Ben Spies in 2009, while Pata Yamaha with Brixx WorldSBK were crowned teams’ champions, and Yamaha won the manufacturers’ title for the first time since 2007, culminating in the prestigious Triple Crown.

Elsewhere in WorldSBK, the 24-year-old’s teammate Andrea Locatelli was awarded Rookie of the Year, with the GRT Yamaha WorldSBK Team topping the Independent Teams’ standings, as Garrett Gerloff took the Independent Riders’ title.

In the supporting WorldSSP class, Dominique Aegerter marked his rookie campaign with a sensational title. The popular Swiss rider scored 10 victories and was the class of the field, winning the title at the penultimate round and giving the Ten Kate Racing squad their first teams’ championship win with Yamaha on their return to WorldSSP. The Yamaha R6 continued to be the bike of choice, with all riders and teams doing their part to ensure Yamaha were manufacturers’ champions for a fifth consecutive season.

We are incredibly proud of our success in 2021. World Champions in MotoGP, WorldSBK and WorldSSP, as well as in MX2, marks one of the greatest seasons for Yamaha in its history. Congratulations to the four riders’ champions, each of them fully deserves their titles and we are proud to have them in the Yamaha family. These results represent the hard work done by everyone at Yamaha to build and develop the most competitive machinery, and we also want to thank all of our Official and Supported teams, as well as our partners, for their incredible efforts. In 2022, we aim to achieve even more success together and we can’t wait to see what we can accomplish.

2021 has been an amazing year, especially with it being Maxime’s first year with the Factory team. He won five Grand Prix, so it shows the great progress he’s been able to make after winning his first GP last year. He was able to manage the championship very well, he did the job and was very consistent. Jago also did a great job to get second in the championship, having had to start on the back foot with an injury earlier in the year. In the second half of the season he was really good, very consistent and I’m sure we’re looking forward to a great 2022. This MX2 championship has been an amazing one. Seeing Yamaha back on the top of the manufacturers’ standings after great performances by all the riders is really special. Thibaut also did very good as well considering this was just his first year, making some podiums. Congratulations to all our champions this year and let’s hope for another great season in 2022.