A thrilling Latvian Grand Prix in Kegums, round nine of the MX2 World Championship, saw Monster Energy Kemea Yamaha MX2's Jago Geerts strengthen his third position in the championship as the runner-up in both races for second overall. Teammate, Ben Watson locked in a season-best result with a pair of fourths for fourth overall and has moved into the top-five in the championship standings. He now trails fourth by 5-points.

The Monster Energy Kemea Yamaha MX2 duo of Ben Watson and Jago Geerts rocketed out of the gate on the YZ250F's in the first race of the day. Watson, who started on the inside of the gate after finishing third in the Qualifying Race on Saturday, held a tight line to emerge from turn-one inside the top-five, while his teammate, Geerts, barged his way through the pack from gate 11 - which is where he finished in the Qualifying Race.

The MX2 class is renowned for its action-packed first-lap, and it delivered once again. Watson capitalized on some carnage that involved three-riders to move into third, while it was that same incident that saw Geerts take an off-track excursion to avoid being caught in it.

Watson was able to maintain third position for the first three laps before his hard charging teammate pushed past. As Watson settled in fourth, Geerts premeditated yet another late-race power-surge and executed it to perfection as he stole second-position from Thomas Olsen with 2-minutes left on the clock.

While Geerts extended his tally of second-place finishes to a total of six, Watson finished fourth, 30-seconds ahead of Yamaha SM Action M.C. Migliori's Maxime Renaux who achieved a career best fifth place. In the second and final race of the weekend, Geerts had the bit between his teeth once again as he made some superb passes on his way from eleventh position up into second, in what was a carbon-copy of the first race with another late race charge and pass on Olsen. Watson got off to another top-five start and put an epic textbook move on Adam Sterry to finish fourth again, for fourth overall.

Geerts mounted the podium for the fifth time this season and has stretched out a 50-point buffer on the rider in fourth. Watson reclaimed his place inside the top-five where he needs 5-points to move up into fourth. Renaux, who is contesting his first full season in MX2, celebrated a career best finish. He was sixth overall and is now 12th in the championship standings.

The next round of the FIM MX2 World Championship will take place in Teutschenthal, Germany, in five days' time.

I felt good on the track today. I didn't have the best gate pick, which was quite difficult on a track like this, but I felt good and came back strong and managed to get back to second. I am happy with that result. I'm really happy with this weekend. My riding was a little bit off the pace of the top guys, but there was a pretty big margin from me back, so I felt much better. I didn't feel really good on the track, so I didn't want to hang it out, I just wanted to get two good results and keep plugging away. Overall, I feel I rode OK and the result was solid, and good for the championship. From here we will keep building. 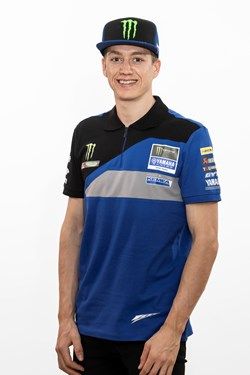