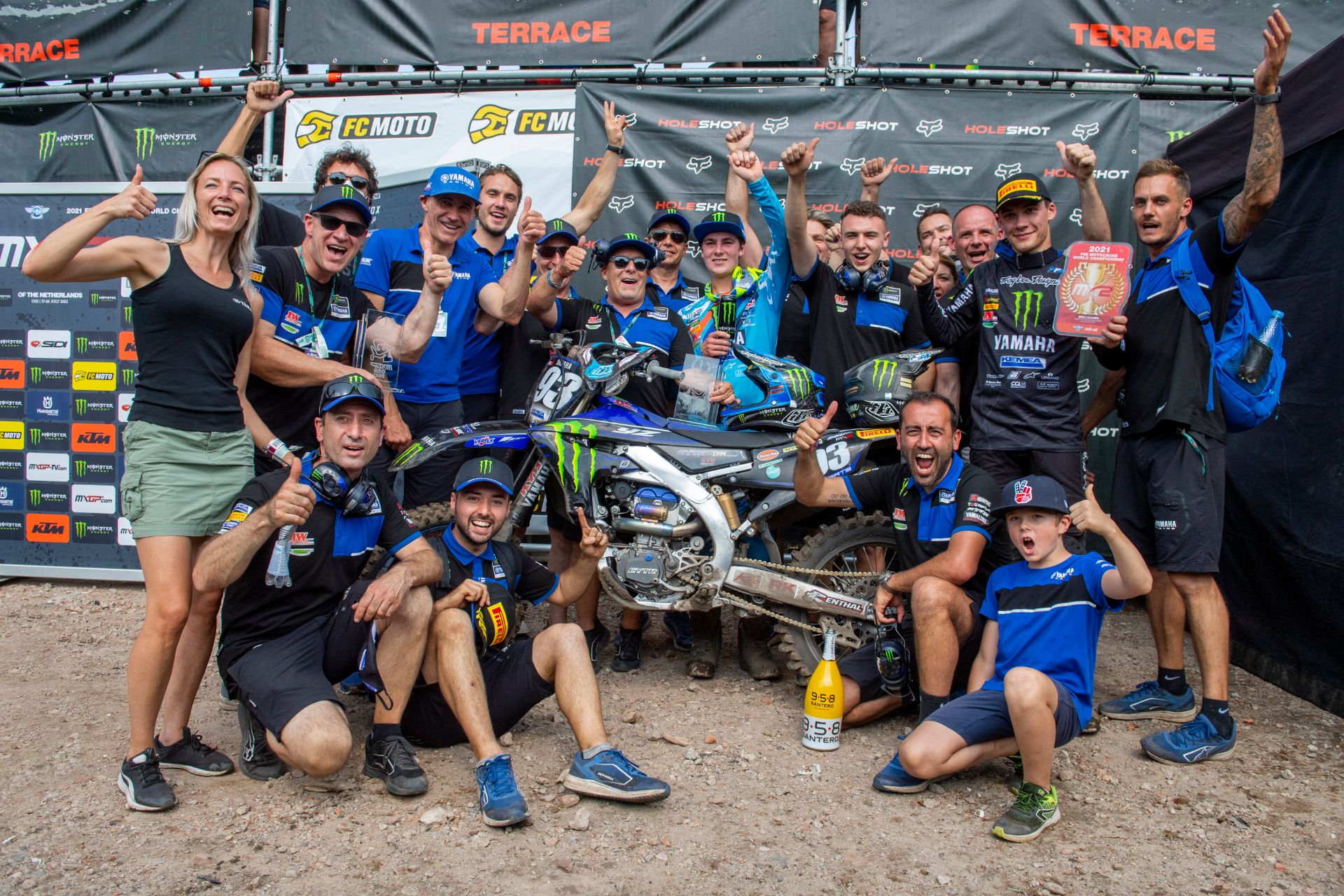 Monster Energy Yamaha Factory MX2’s Jago Geerts was unstoppable at the fourth round of FIM Motocross World Championship in Oss, The Netherlands, as he powered his YZ250FM to a double race victory – his first of 2021. Maxime Renaux added to the teams’ success on Dutch soil, with the 30-points scored for fourth overall being enough to take the MX2 Championship lead, while Thibault Benistant tied for 10th. As a result, Yamaha has reclaimed its place at the top of the table in the manufacturers’ standings.

Maximizing the power of the YZ250FM, Geerts and Benistant were quick out of the gate in the opening race of the day. Geerts set the fastest lap of the race and made an impressive pass for the lead on Lap-3, as Benistant battled for fourth. Familiar with the tricky nature of a Dutch sand track, the young Belgian, Geerts, excelled as he kept a fast and consistent pace for the entire 30-minute plus 2-Lap duration to take his first race win of 2021.

Benistant was in the running for a top-five finish in sweltering and sunny conditions but was taken out of fourth position when another rider made an aggressive move which caused both riders to fall. The 18-year-old remounted his YZ250FM inside the top-10 but fell again with less than 5-minutes on the clock and ended up finishing 13th.

Confronted by the rough and rugged sand surface, Renaux had to work hard to pass riders after crashing out of third position at turn-one. Ever the grafter, the ‘959’ knuckled down and tried to get creative with his chosen lines. While pushing forward, the Frenchman hit the dirt again in the middle of the race, but still managed to salvage ninth, which was enough to take the MX2 championship lead for the first time in his career.

In the final race of the day, Geerts was again unbeatable. The 21-year-old got off to another incredible start and resisted a hefty challenge from Dutch rider Kay de Wolf to score his first double race win of the new season.

A new and improved, mature approach to racing has already paid dividends to new championship leader Renaux. The ‘959’ remained cool, calm and collected as he put in a steady ride for fourth position, while Benistant put in an astonishing charge back to sixth after starting outside of the top-10.

The Monster Energy Yamaha Factory MX2 team will proudly carry the MX2 Championship red-plate into the next round of the series that will take place next weekend in Loket, Czech Republic, on July 25th.

For full results from the MX2 Grand Prix of The Netherlands, click here.

“I am really happy with how it went today. The first heat was really good. I was second in the start and then on the third lap, I made a pass for the lead. From there, I could ride my own race and kept the pace for the whole moto to take the win. I was really happy with that and then in the second heat, I got the holeshot and had a good battle with (Kay) de Wolf, but I still got the win. It’s good to finally be back on the top step of the podium. Now I will try to do the same in the next races.”

“It was a tough day for me. I had a big crash in practice, so I had to ride through the pain a little bit. The first race was okay; I just made too many mistakes. I crashed in the first corner and came back pretty good and then I had another crash. Honestly, I was not feeling too comfortable on this track today, so I didn’t want to push really hard. Fourth was enough for me today; we took the red plate in the team and on my bike. That is really good. I am happy to make it through a bad day like this, already looking forward to the next one.”

“The weekend was not bad. Some positives and negatives just like on the other weekends. My starts were not really there today, at least in the second race. In the second moto, the speed and feeling was there, my physical was also pretty good, so I am happy with that. From here, we will just continue to build and gain experience in the MX2 class.” 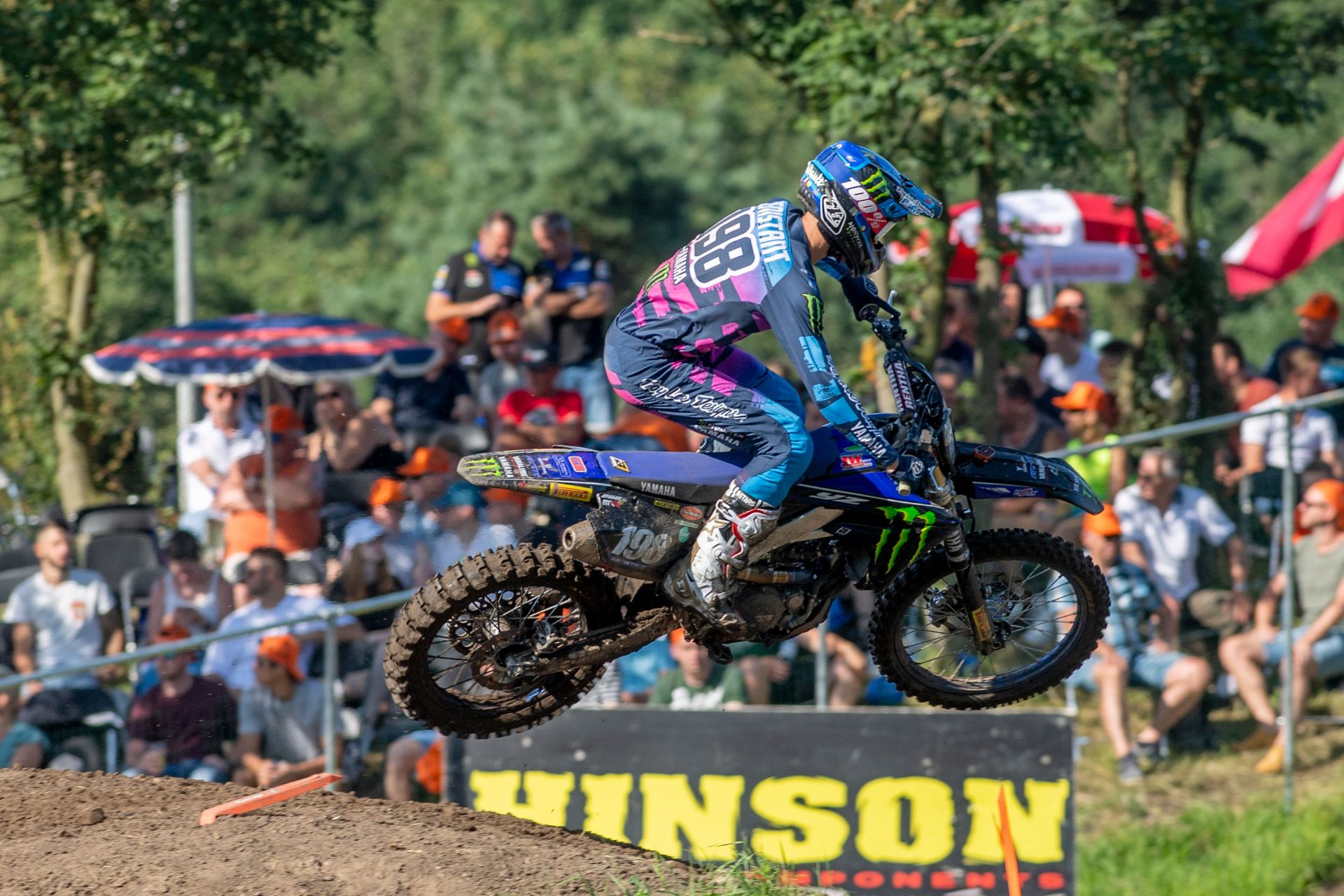