Monster Energy Yamaha Factory MX2’s Maxime Renaux has been crowned 2021 MX2 World Champion at the 16th round of the FIM Motocross World Championship in Pietramurata, Italy, after celebrating a phenomenal Grand Prix win with a thrilling race victory – his eighth of the season.

An incredible 12 podiums from 16 rounds, eight race wins, five Grand Prix wins and 20 top-three finishes are some of the highlights from Renaux’s 2021 title campaign. The 21-year-old Frenchman secured the 2021 MX2 world title by beating his only remaining championship rivals, Tom Vialle and Monster Energy Yamaha Factory MX2 teammate Jago Geerts, in both races at the MXGP of Garda today. His world title success comes as a first for Yamaha in MX2 since Antonio Cairoli in 2007.

Renaux got off to a top-five start in the opening race and powered his YZ250FM past the defending World Champion Vialle to move into fourth position on lap one. A few turns later, the young gun inherited second from the two riders in front of him, Geerts and Bastien Boegh-Damm, as they collided and crashed spectacularly. Demonstrating incredible race maturity, the French sensation kept his lap-times fast and consistent as he raced to a sensational second-place finish.

Going into the final race of the weekend, Renaux had a comfortable 101-point lead over Geerts in the MX2 Championship Standings. All he had to do was beat his teammate and finish within six points of Vialle to take the crown. When the gates eventually fell, the tension that had built up prior to the race was certainly felt as the championship leader challenged Vialle for the top spot. After proving he was the fastest rider on track by setting the quickest lap of the race, the ‘959’ successfully made a pass on lap five and stormed to an emphatic race victory.

At the same time, a dramatic Grand Prix saw Geerts crash spectacularly out of third position on the first lap of race one when another rider jumped across the track and struck him mid-air. From there, the ‘93’ remounted his YZ250FM and put in a valiant charge through the pack from last position back to 13th, as the third of the Monster Energy Yamaha Factory MX2 trio Thibault Benistant fought back from a 10th place start to finish sixth.

In the final race, Geerts experienced an unusual technical issue and had to withdraw, as Benistant battled for seventh.

After a fantastic display of speed and skill at the MXGP of Garda, the newly crowned MX2 World Champion, Renaux, celebrated a successful 2021 title campaign in the best way possible, from the top step of the podium.

With two rounds remaining in the FIM Motocross World Championship, Renaux is uncatchable at the top.

Benistant missed the top-five by a mere 3-points. He was sixth in the overall classification and is currently seventh in the MX2 Championship Standings. At the same time, Geerts finished 17th overall and will head into the final two rounds of the MXGP series, third in the points, 16 shy of Vialle.

For full results from the MX2 Grand Prix of Garda, click here. 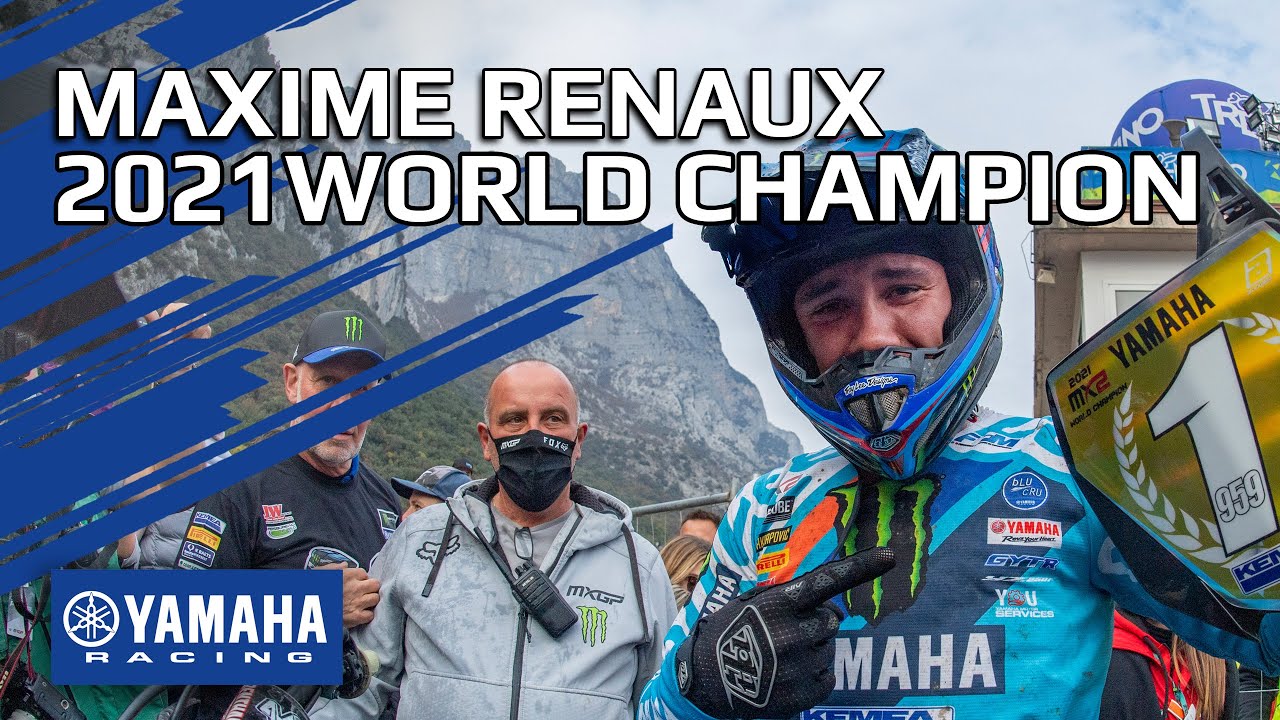 “This means a lot to me. We made it! We are the World Champions in 2021 in MX2, so that is a great achievement. We had to work hard for that over the past years, and even the past few rounds here have been tough for me, very up and down, but we were able to bounce back today. I am so happy to get the world title with a race win and the GP win, which means a lot to me. It’s always something you want to grab with a win. It was an amazing day for me. I will never forget this for sure!”