When the gate drops, the talking stops and with the opening round of the FIM Motocross World Championship fast approaching, the Monster Energy Yamaha Factory MXGP and MX2 teams are revved up and ready to get the new season underway. Back with a familiar yet strong line-up in 2022, both teams are looking fit, fast and motivated for the new MXGP season, which will kick off at the spectacular Matterley Basin venue in Winchester, England, next weekend.

As announced in 2021, the reigning MX2 World Champion Maxime Renaux has moved up from the 250cc class, MX2, to the 450cc class, MXGP. The 21-year-old 'Power Rookie' was drafted into the Monster Energy Yamaha Factory MXGP team at the end of 2021 and is poised to race a YZ450FM inside the premier class alongside his new teammates Jeremy Seewer and Glenn Coldenhoff. 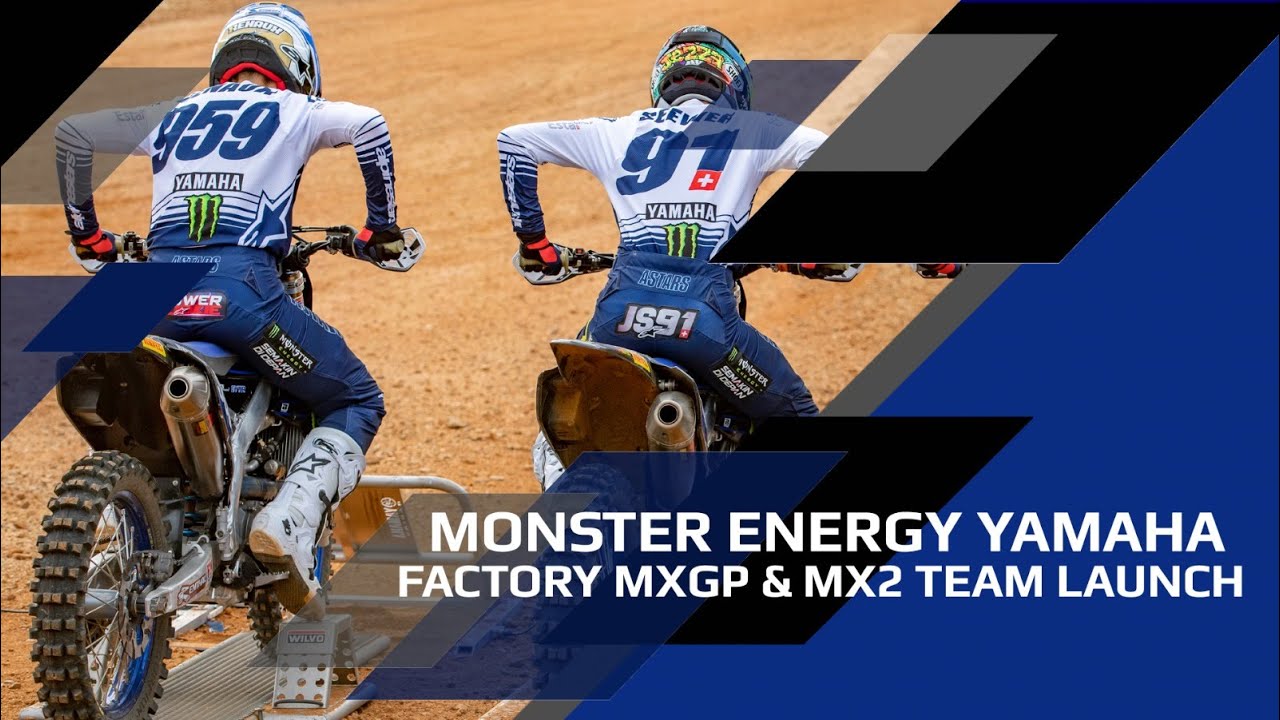 Seewer will again spearhead the charge in MXGP. The five-time FIM Motocross World Championship silver medalist hopes to build on the same Grand Prix winning form he showed at the end of last season. "The MXGP class will be super tough again this year as well, so my goal for 2022 is to get the best out of myself at every single race to be on the podium as much as possible" he explained, "I feel like I'm on a level at the moment I've never really been before so this sounds yeah good to me, but you know after, we will see the competition because nobody ever sleeps they all improve!"

Seewer's search for World Championship glory will not come without a challenge from his highly acclaimed teammate Coldenhoff, who is also motivated to collect more pieces of podium silverware. "The ultimate goal has always been the same," the Dutchman said, "I live to win. For sure it's difficult, I mean if you look at the field you know it's very very competitive, but I think the most important thing is to stay consistent be all the time up there every single weekend that's with only one goal, and that's to win."

As for the rookie, Renaux has quickly become the posterchild of Yamaha's strong strategy to develop the next generation of MXGP champions from within its own ranks. The young Frenchman has been with Yamaha for more than a decade and has secured two world titles on his way up to the very top of the Yamaha Racing pyramid. "It's really nice to be a Factory rider in my rookie season in 450," he smiled, "I really love the bike and the behavior of the engine really suits my style so I can be more clean and more safe and secure on the bike. I think I'm going to make a big step and I will make a big improvement this season again."

Last year was one for the history books for the Monster Energy Yamaha Factory MX2 team, as they enter their 25th year in blue this season. The team won their first-ever MX2 World Championship with Maxime Renaux in 2021 and became the first-ever Yamaha team to secure the gold and silver medals inside the MX2 World Championship in the same season. As a result, Yamaha also successfully defended the Manufacturers' world title.

Back for more in 2022, the Monster Energy Yamaha Factory MX2 team has retained its young stars Jago Geerts and Thibault Benistant. As one of the most decorated riders in the lower capacity class, MX2, with 53 top-three race finishes, 20 races wins and 27 podiums to his credit, Geerts enters his fifth season with Yamaha and the team determined to achieve the goal of winning the World Championship. "I'm really determined to do well this season," he reaffirmed, "I'm in really good shape physically and I feel good on the bike, so I'm looking forward to the new season. I was second in 2020 and second in 2021, so for sure, I want a little bit more this year and hopefully I can make it happen."

Completing Yamaha's Factory line-up after an impressive rookie season where he celebrated a maiden podium finish and two race wins, Benistant is excited to keep progressing up the ranks in MX2. "I feel really good on the YZ250FM" he expressed, "the more I ride with this bike more I feel good so it's nice. In 2022, my goal for this season is to be more consistent, more on the box and to take some good starts."

Motocross fans don't have long to wait for racing action to commence; the MXGP and MX2 riders will line up for the first Grand Prix of 2022 next weekend. Each class will have two practice sessions and a qualifying race on Saturday 19th February, followed by two championship races on Sunday 20th. Join us on Yamaha Racing's Official social media platforms, Facebook, Twitter & Instagram.