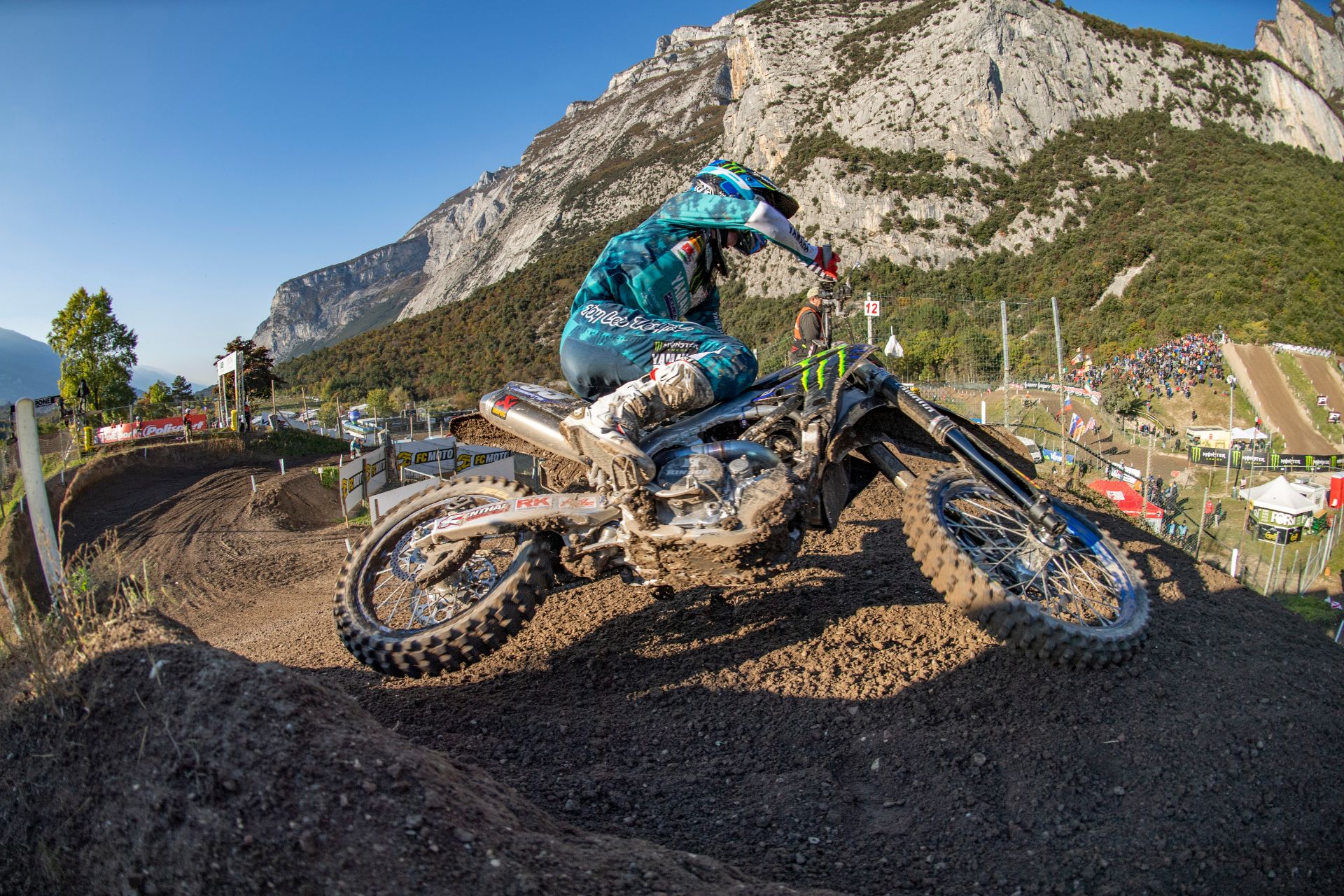 The incredible Dolomite mountains provided a picturesque backdrop for the MXGP of Trentino, round 14 of the FIM Motocross World Championship, that saw Monster Energy Yamaha Factory MX2’s Jago Geerts make a long-overdue return to the podium. The Belgian finished second in both races for second overall. Maxime Renaux continues to lead the MX2 World Championship by 92-points after salvaging enough points to finish eighth overall.

Another hotly contested Timed Practice session saw Geerts and Renaux set the pace with near-matching lap times. Geerts posted a 1’38.637 to go pole for the fourth time this season, edging the championship leader who ended the session in second position with a 1’38.643 lap time. During the session, Thibault Benistant hyper-extended his left knee but managed to post a 1’39.819 lap for ninth.

In the opening race of the day, it was ‘The Rookie’ Benistant who got off to the best start, exiting the first turn inside the top-three with Geerts in tow. Geerts took a conservative approach to the first few laps of the race before launching an attack on Benistant and the rider in second, Isak Gifting.

On lap-8, Geerts passed his teammate and reeled in Gifting to challenge second position.

After a gripping bar-to-bar battle with the Swede, Geerts forced a pass on the final lap and secured second position.

Renaux finished sixth, which was a good result for the Frenchman after hitting the first sector of the opening lap in 18th position. The ‘959’ missed his jump off the gate and was squeezed through the ‘s’-bend of first corners, but soon set about his race and carving through the pack. At the flag, he was awarded 16 points for his efforts. Benistant was unable to finish due to a technical issue.

In the final race of the day, Geerts got off to another fantastic start and emerged from turn-one in fourth position. The young Belgian quickly made a pass for third and eventually inherited second from a fallen Rene Hofer two laps later.

As Geerts challenged the defending World Champion Tom Vialle for the victory, Renaux was faced with the task of limiting the damage after crashing at turn-one. Riding with his heart on his sleeve, the red-plate holder, Renaux, put in a heroic ride around the one-lined ‘Arco’ circuit to salvage eighth.

Benistant reaggravated his knee injury when he dabbed his leg and fell from ninth in race two. The ‘198’ remounted his YZ250FM outside of the top-20 and bravely fought through the pain barrier to finish 17th.

At the end of a dramatic and challenging Grand Prix of Trentino, Renaux continues to lead the MX2 World Championship by 92-points over Geerts. Geerts and Benistant have maintained their positions in the series and are second and seventh, respectively.

The Monster Energy Yamaha Factory MX2 team will back on the gate here in Pietramurata in two days, with the 15th round of the 2021 series taking place on Wednesday 27th October.

For full results from the MX2 Grand Prix of Trentino, click here.

“I’m really happy. I knew in Spain I had good speed, and then in Timed Practice this morning I finished first, so I was really happy with that and feeling good on the track. I did find it quite difficult to pass, with all the guys on a similar pace and the track was quite one-lined too. So, second was the best I could do today. I am happy with that after a tough few weeks.”

“Bad day for me today, starting outside of the top-20 in both races, and then in the second race, a crash at the first corner. I had to come from so far behind but came back pretty good in both races, which was great riding because we all know that ‘Arco’ is a hard track to pass on. I am not satisfied with the result today, but we will work hard to have my starts on point for Wednesday.”

“My day started as you would expect. My lap time was okay, but I made a strange mistake on a jump and landed with my leg straight and hurt my knee. I struggled with that a bit today, but I still managed to get a good start in third position in the first moto, but I had a little issue with the bike and could not finish. In the second race, I didn’t have the best start and was starting to fight back before I made a small mistake and hurt my knee again, so I just did my best to push through the pain and fight until the end.”