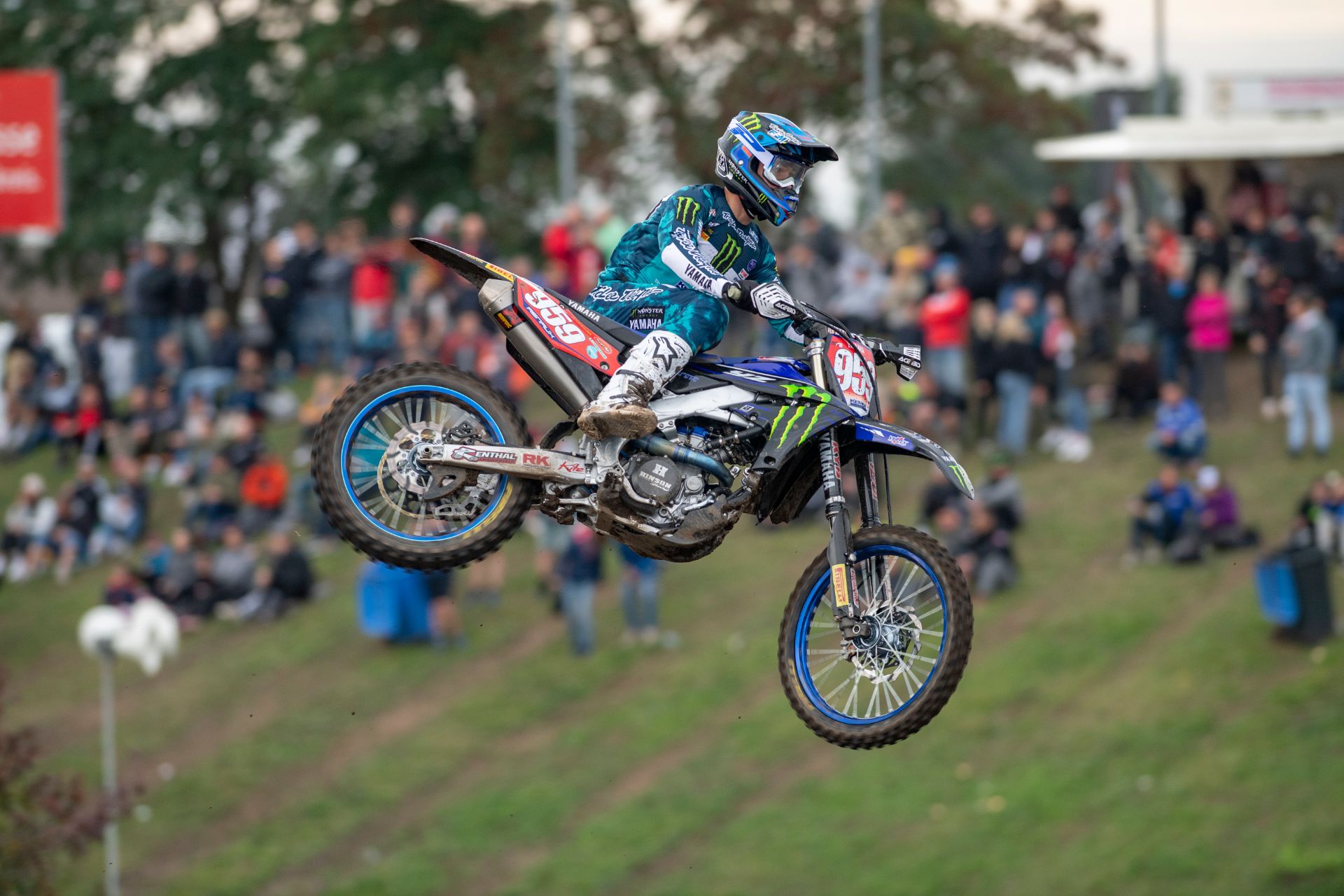 Monster Energy Yamaha Factory MX2’s Maxime Renaux added to his MX2 Championship points lead at the 11th round of the FIM Motocross World Championship in Teutschenthal, Germany. The Frenchman celebrated a ninth podium appearance and was eventually awarded the Grand Prix win after his compatriot Tom Vialle received a penalty for disrespecting waved yellow flags. Renaux now leads the championship by 85-points over teammate Jago Geerts who finished 2-points shy of the podium, in fourth overall. Thibault Benistant finished 12th after crashing in both races.

The Monster Energy Yamaha Factory MX2 riders took to the highly technical and spectacular Teutschenthal circuit, starting with a hotly contested timed practice session. Less than 0.174 of a second separated the top six riders. Geerts ended the run in fifth, with Renaux posting an almost identical lap time for sixth. Thibault Benistant was 11th – only 1-second off the pace.

In the opening race, the trio of YZ250FM riders got off to strong starts, with Renaux starting fourth, followed by his teammates Benistant and Geerts, in that order. As the laps ticked by, the championship leader, Renaux, increased his pace and before the end of lap-4 the Frenchman had made a pass for third.

Geerts took a more careful approach in the opening stages. In front of a wild crowd, the Belgian made a pass on local hero Simon Langenfelder for fourth but finished fifth after he was nudged back a position by Jed Beaton.

Meanwhile, Renaux settled into a formidable rhythm and edged closer to the leaders but eventually ran out of time to make a pass stick. He finished third.

As for Benistant, the ‘198’ crashed dramatically out of fourth position on the second lap, and after rejoining the race in last position, he fought his way back to 16th.

Proving the undeniable power of the YZ250FM, all three riders fronted the field on the exit of turn-one in the final race of the day. Almost a blueprint copy of race one, Renaux was again the best placed Yamaha rider in front of Benistant and Geerts.

As Renaux chased the defending champion Vialle, Benistant spectacularly crashed out of third position when he caught his footpeg at the top of a jump face. Geerts inherited the final place in the top-three and finished there 16-seconds off Renaux. While Renaux and Geerts physically crossed the finish line in second and third, respectively, both riders gained one position after Vialle received a yellow-flag infringement. Renaux was awarded the race win and Geerts was bumped up to second.

Meanwhile, Benistant treated the highly animated crowd to a thrilling battle of wits as he used some creative lines to pass riders on his charge back to a ninth place finish.

The next round of the FIM Motocross World Championship will take place in Lacapelle Marival, France, on October 10th.

For full results from the MXGP of Germany, click.

“Today was a good day. Two solid races and two solid results. The goal now is to stay steady and not take any big risks, although I did try to push for the win in the second race. Now, I can take the red plate to my home round in France. I really look forward to that to have the French public there and cheering. I have never experienced that before so I am looking forward to it.”

“I am pretty happy with the result. I was riding well but I made some small mistakes and finished fifth. I was happy with my speed but I lost my rhythm a little bit at the end. In the second heat, I was a little bit better. I know I need to keep working to find more speed so that I can battle with Tom (Vialle) and Maxime (Renaux).”

“Today was not a really good day for me. I took two really good starts but I had some big crashes because I was attacking too much. This is something I am working on, I want to be more aggressive in the first laps, but I was pushing too much and then I crashed and had to start from last. So it was quite a difficult weekend for me.”