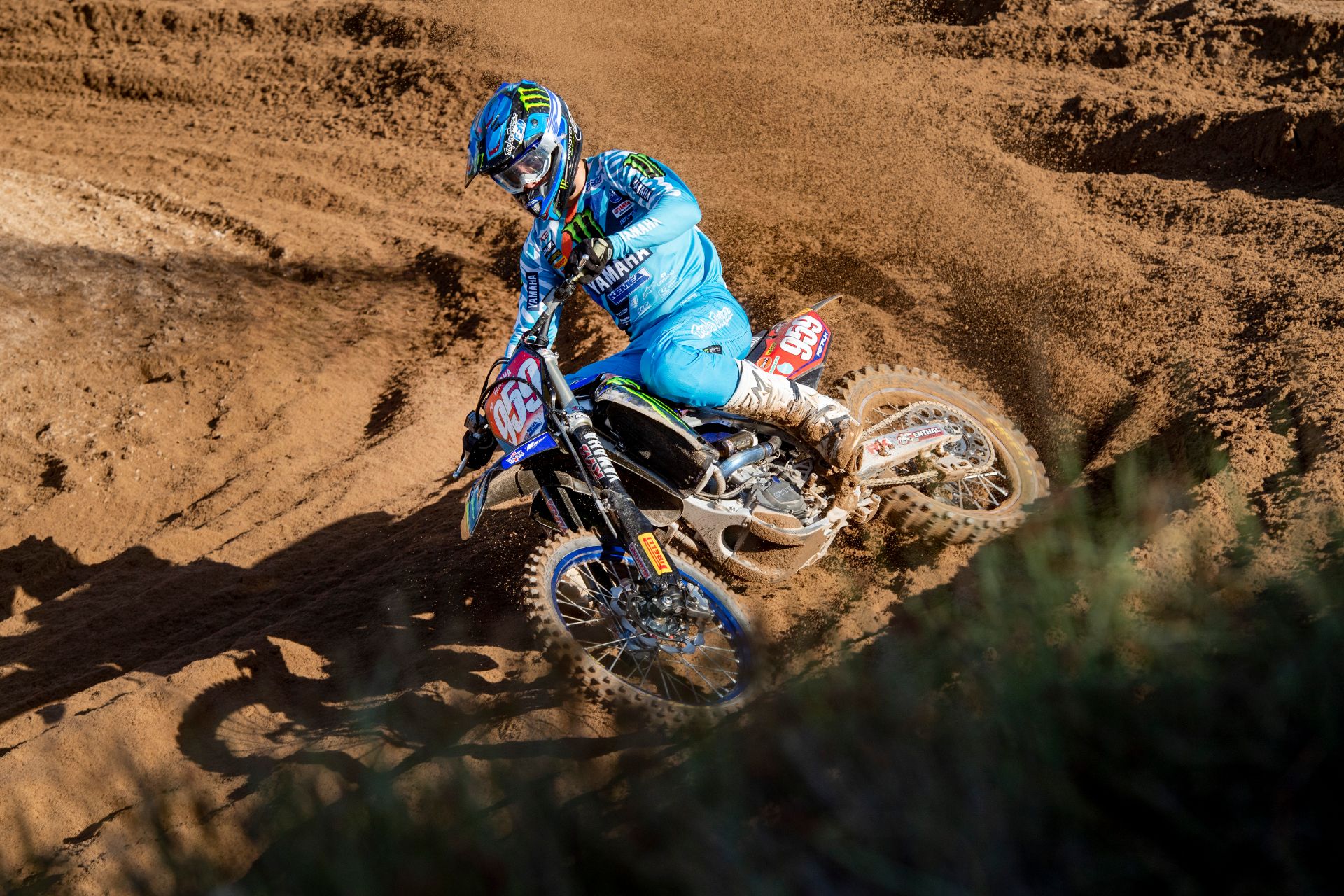 Monster Energy Yamaha Factory MX2’s Maxime Renaux secured second overall at a scorching hot and stuffy Sardinian Grand Prix in Riola-Sardo. Renaux now has a 71-point lead in the championship. Meanwhile, on a day spoiled by crashes, teammates Jago Geerts and Thibault Benistant recovered well to finish the 10th round of the FIM Motocross World Championship in fourth and sixth, respectively. Geerts remains third in the series standings but has moved within 7-points of second position while Benistant has gained one position and leaves Sardinia in fourth.

The MX2 Grand Prix got off to a blistering start for Geerts. The Belgian rocketed to the top of the timesheets and qualified on pole for the second time this season. Teammates Renaux and Benistant finished up the session in fourth and 10th, respectively.

As temperatures soared, the gates dropped for the opening race of the day, and it was Benistant who charged to a top-three start. Joining the defending MX2 World Champion Tom Vialle and title threat Mattia Guadagnini at the front of the field, the young Frenchman managed to hold his own as his teammate, Renaux made some crafty passes to move into the top-five.

With heat being an enormous factor today, the MX2 protagonists seemed unusually settled up front. Although the riders did their best to conserve energy, many faded and made mistakes in the second half of the race. Benistant was one of the first. The rookie fell from third position on lap-9 but recovered well to finish inside the top-five. He was fifth.

Showing an incredible amount of ‘race smarts’ and craftsmanship, Renaux capitalized on his rivals’ mistakes and shaved down a 10-second lead to treat the fans to a last lap thriller. The ‘959’ pushed Vialle all the way to the flag but narrowly missed the victory by  a mere second.

The pole-sitter Geerts finished eighth after crashing on the opening lap. Despite coming through traffic, the ‘93’ still managed to post the fastest lap of the race.

An intense start to the second and final race of the day saw the Monster Energy Yamaha Factory MX2 trio go bar-to-bar with each other around turn-one. Benistant emerged from the frantic, rough and sandy first-corner in fifth position with Renaux and Geerts hot on his heels in sixth and seventh respectively.

With several passes made in the opening stages of the race, all three riders put on a superb show as they blasted past many of the classes super-talents. Before the end of lap-3, Renaux and Benistant had powered their YZ250FMs into the top-three.

Geerts was slightly more patient than his French teammates, but eventually inherited third from Benistant who fell and was landed on by the rider in fourth.

With less than 2-minutes on the clock, Renaux had to surrender second position to the hard-charging Geerts. Still, with the bigger picture in mind, he gracefully took the 20-points awarded for third to finish second overall and extend his points lead out to 71.

Geerts recovered nicely from the spoils of Race 1, to finish second for fourth overall, while Benistant salvaged eighth position and was classified sixth.

With an intense run of nine Grand Prix’s in the space of eight weeks, the Monster Energy Yamaha Factory MX2 trio will sit out this years’ Monster Energy FIM Motocross of Nations that will take place in Mantova, Italy, next weekend, September 26th.

The next round of the FIM Motocross World Championship will take place on October 3rd in Teutschenthal, Germany.

For full results from the MX2 Grand Prix of Sardegna, click here.

“I had to push really hard in the first race and I pushed to the end. I really tried to go for the win and my last five or six laps in the first race were really good and, in the end, I could catch Tom (Vialle). I tried to pass him but couldn’t make it happen. I was still satisfied with the race. In the second race I had a better start and I tried to keep the pace of Tom but in the end, I was a little bit tired and my legs were burning a lot, so I tried to just handle it to the end, which is what I did. I also had to think of the championship and not do anything crazy, so I just took third, second overall, and that was enough for today. I extended the championship lead and that is all I need to do.”

“I’m a little bit disappointed. I crashed in the first heat on the first lap and then I was more than 20-seconds behind everyone, but my riding was really good and I got back to eighth. So, I had to be happy with that. In the second race, I took too long to get past some of the guys in front of me, so the gap was too big by the time I got to second place. I am happy with my riding; I just hope to get better starts in the next GP’s.”

“The day was not so bad in the end. My lap times were close to the guys in the front, which is good. I am really happy with my starts today; we managed to improve a lot. We worked on this, changed the engine, and it worked well. I am really happy about this. I showed good speed and good technical skill, but I felt I missed some physical condition today, so we will go back and keep working hard.” 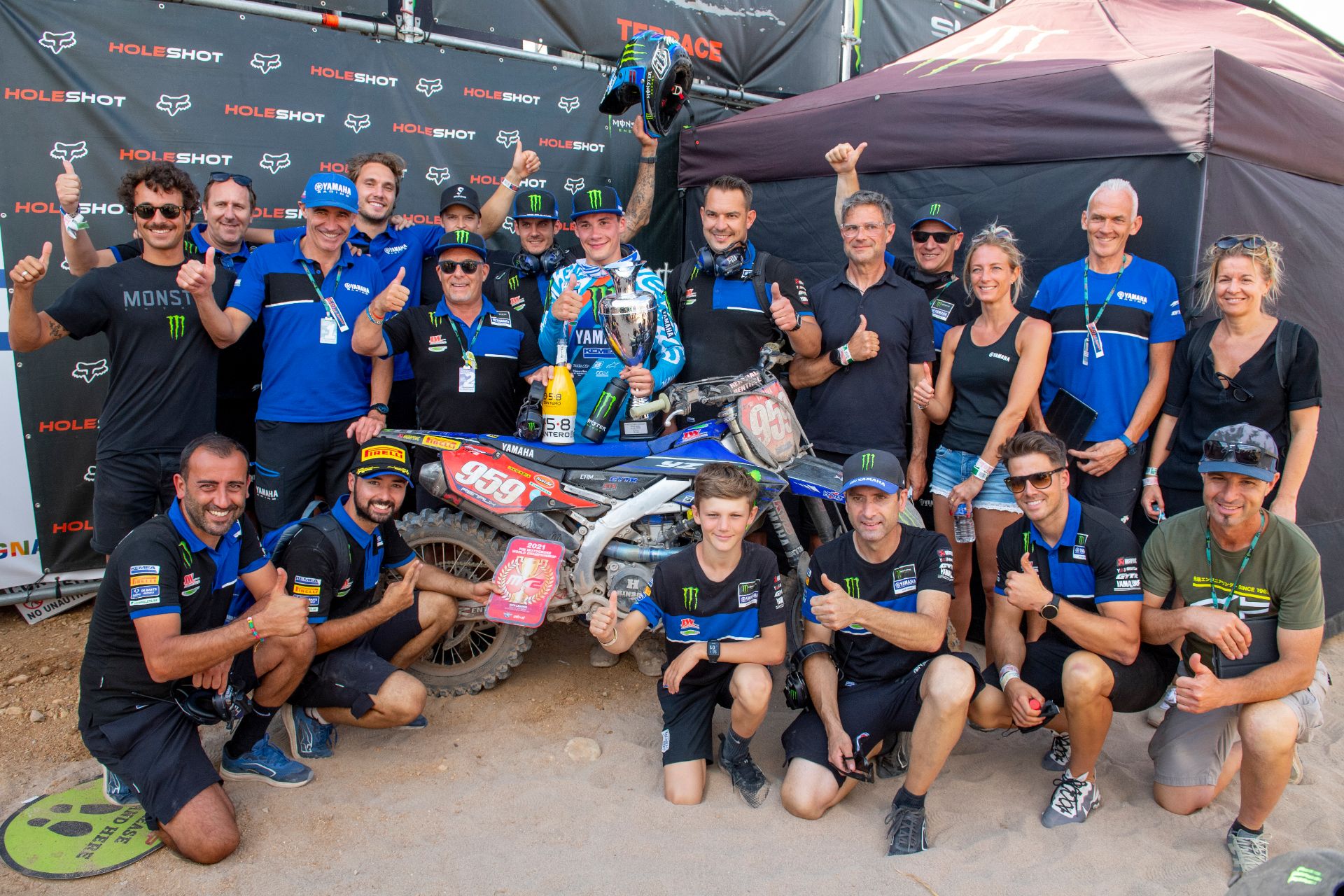