Back with an extraordinary line-up in 2021, the Monster Energy Yamaha Factory MXGP & MX2 teams are looking fast and motivated as they set their sights on the first FIM Motocross World Championship gate-drop of the new season. 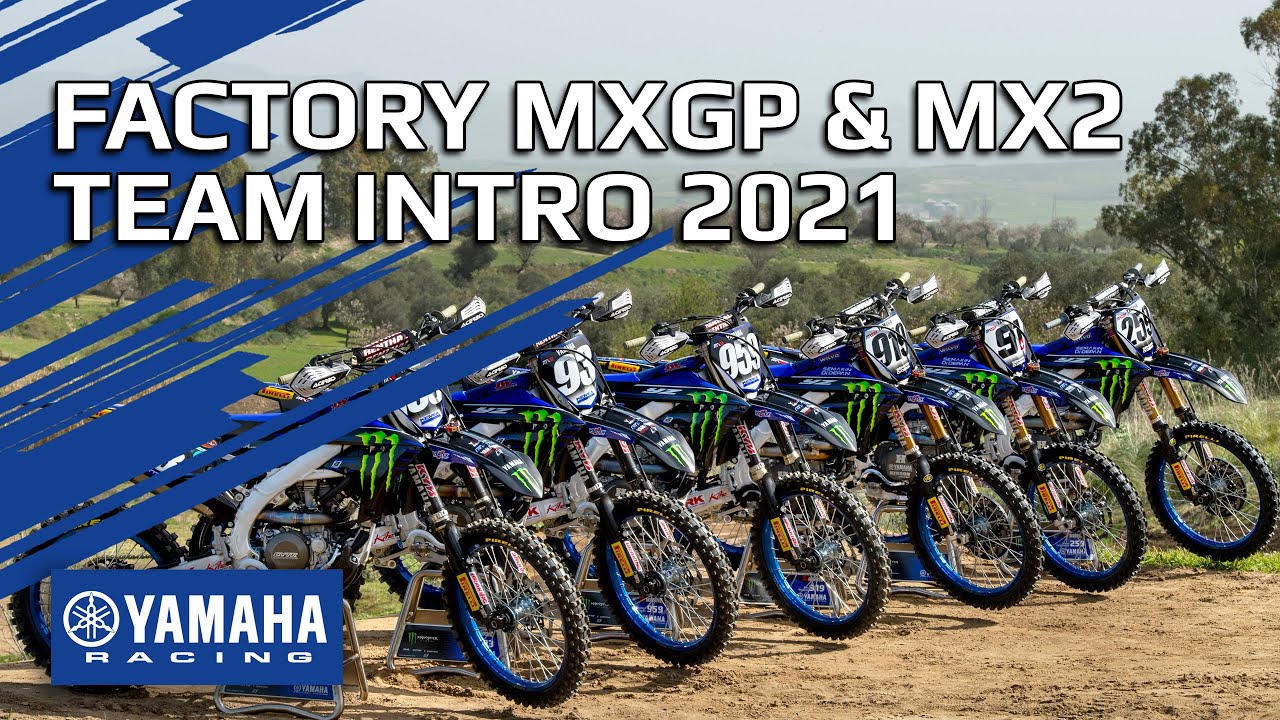 Boasting some incredible stats and a wealth of experience, the Monster Energy Yamaha Factory MXGP team will line up with three popular names inside the premier class, MXGP. Jeremy Seewer will remain on the team for a third consecutive season (fourth with Yamaha) and will be joined under the awning by hot new recruits, Glenn Coldenhoff and Ben Watson.

Spearheading the teams charge in 2021, five times silver medalist Seewer hopes to steer his YZ450FM to the top step of the podium. "I've finished second in the world five times, two times in MX2, two times in MXGP and one time at the Junior World Championships" the 26-year-old Swiss rider said, "and these are not bad stats, you know, but of course I want to win, and yes, I think I can!"

"Usually, we race in 19 different countries and on different tracks, sand, hardpack, hot, cold, winter, summer, you know, so it's such an open book," Seewer continued, "it just takes a lot, a lot, a lot and at the base, I think it's hard work from everybody."

Seewer's search for World Championship glory will not come without a challenge from his new teammate Coldenhoff. "Yeah, I think there's a lot of hard work," the 30-year-old Dutchman agreed, "not only for myself, but I also think from the whole team. I think I was ready for a big change this year, which I actually did, and I really feel good already within the team. I feel like I have really good people around me, and the goal will always be to get the world title."

While his teammates strive for more race and Grand Prix wins, 23-year-old rookie Ben Watson hopes to soak up their knowledge and experience as he gets set to get his feet wet. "For me it's a really big opportunity, to join the Yamaha Factory MXGP team" he said "and something I'm really grateful for because obviously the beginning of the season in MX2 last year, it wasn't going really the way I wanted and the opportunities to show myself were coming less and less. Fortunately, at the end of the season I found myself and started to ride how I know I can, so it was definitely my time to take this step to the 450."

Yamaha has a strong strategy to develop the next generation of MXGP champions from within its own ranks, and as Watson progresses up the Yamaha Racing pyramid, so too will young Yamaha stars Maxime Renaux and Thibault Benistant as they join title favourite Jago Geerts inside the Monster Energy Yamaha Factory MX2 team for 2021.

"It means a lot to me to become a Yamaha Factory Rider for the MX2 team. For sure, it was a goal. It's the highest team in the MX2 class that we can have in Yamaha" Renaux said.

It's no secret that Yamaha is on the hunt for FIM Motocross World Championship glory as the riders aim to secure the MX2 Championship gold plate while defending Yamaha's title as the MX2 Manufacturer of the Year.

"I will try to fight again for the world title," Geerts stated. "The benefits of staying in the same team for a couple years is you get to know the people very good and we made really some improvements with the bike this year, for sure suspension wise and setup of the bike."

As 21-year-old Geerts hopes for a more consistent season, his 20-year-old teammate Renaux is not holding back… "this year I really want to to get back on the top step of the podium" the Frenchman said, "I want more moto wins, more GP wins, and to do better let's say."

Meanwhile, Benistant is enjoying the shift from the highly competitive GYTR kitted YZ250F to the fully-fledged Factory YZ250FM. The 18-year-old sets his sights on a promising rookie season. "Of course everything is a little bit different," he said, "the engine, suspension, everything is a little bit more strong and to be a rookie, I think I have a little bit less experience than the more older, but it's similar because we have almost the same hours on the bike, just not in the same championship, in MX2 I won't have pressure. I know what I need to do and I'm working for."