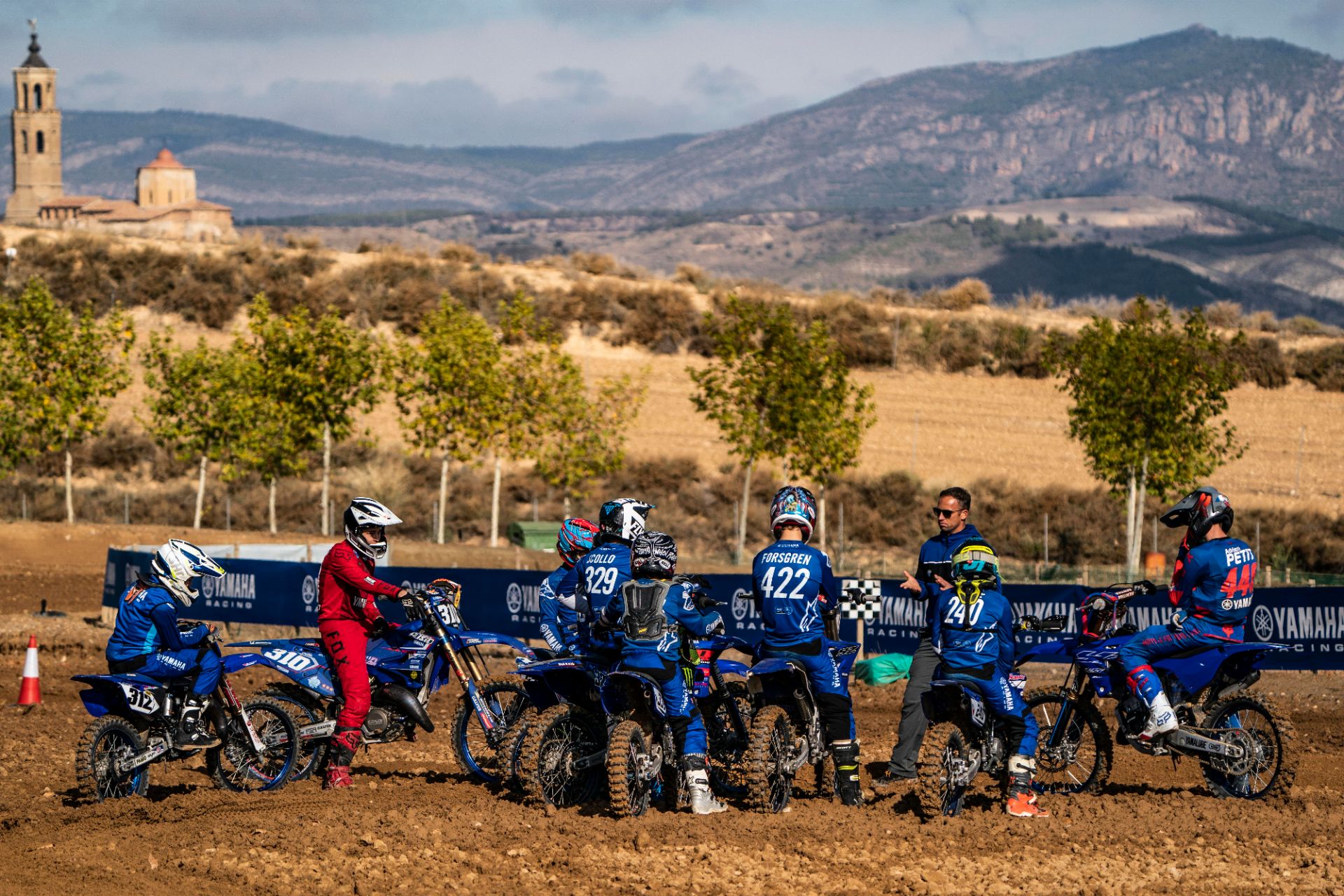 Following a successful display of speed, skill and determination, paired with a fantastic attitude off the track at the 2021 bLU cRU Masterclass in Spain earlier this month, Yamaha Motor Europe is pleased to announce the three winners of the YZ bLU cRU FIM Europe Cup and the two riders who will benefit from support in next year’s Yamaha R3 bLU cRU European Cup.

This Was the 2021 Yamaha bLU cRU Masterclass! 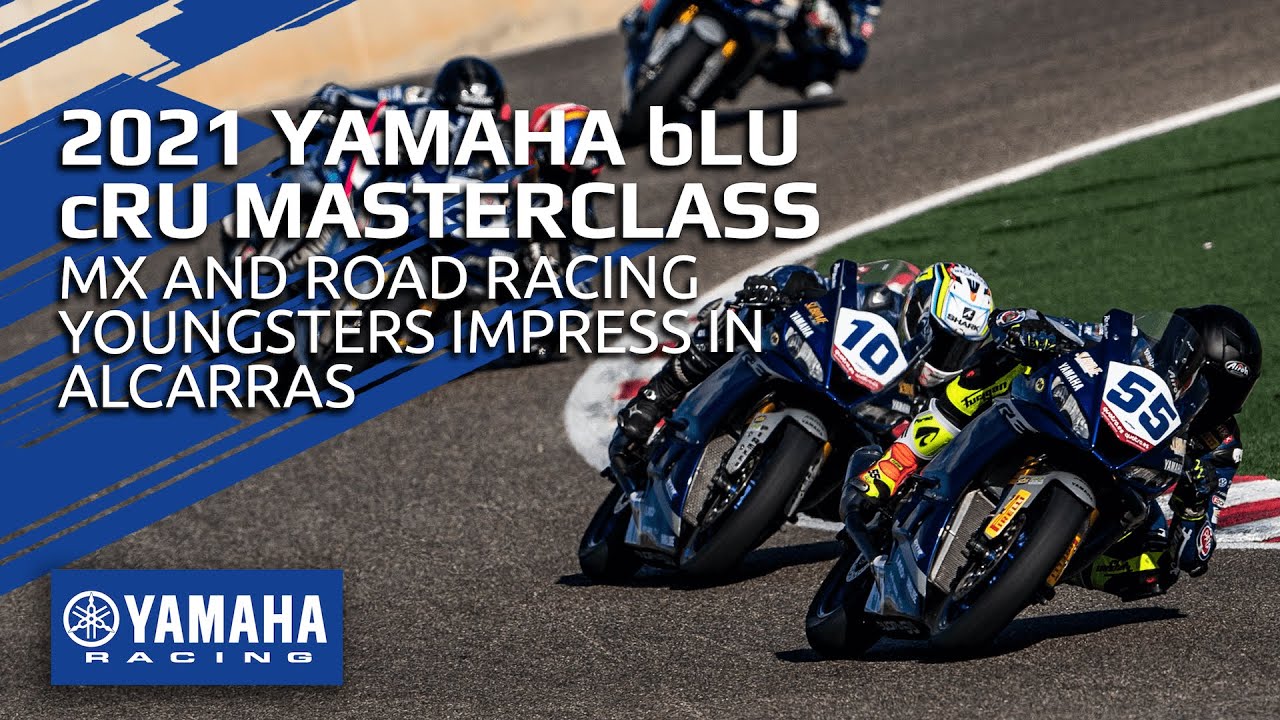 The winner of the YZ125 category is 16-year-old Frenchman Adrien Petit, who earns a place in the Yamaha bLU cRU Team by Aussio, where he will contest the 2022 EMX125 Championship aboard a GYTR kitted YZ125. Elsewhere, 13-year-old Swiss rider Noe Zumstein has been selected as the winner in the YZ85 division, while 11-year-old Dane Bertram Thorius was awarded the top spot in the YZ65 class. Both Zumstein and Bertram will benefit from additional Yamaha support for their 2022 seasons.

Of the 21 road racing entries, the two winners were 18-year-old Spanish rider Yerai Ruiz and 17-year-old Italian Andrea Pizzoli. Both will receive a supported entry into the 2022 Yamaha R3 bLU cRU European Cup, a championship that debuted this season supporting the FIM Superbike World Championship, in which the overall winner will earn a spot on the FIM Supersport 300 World Championship grid as part of Yamaha’s bLU cRU program.

The Masterclass took place just outside of Barcelona, Spain, in Alcarrás, bringing together a group of bright young Yamaha Racing talents from both on and off-road racing disciplines. The event ran to a schedule that has been mindfully designed to encourage, nurture and develop aspiring professional riders.

At the Masterclass, the Yamaha Motor Europe representatives had the chance to observe the promising riders for more than just their talent and flair on a motorcycle. Afterwards, they assessed the youngsters and selected those that had impressed them most, based on their performances, dedication to learn and their attitude off-track.

I’m very happy to hear about this really good piece of news and most importantly, I am glad to have this opportunity presented to me. It’s a part of a dream that is coming true in my passion that I have been living since the age of six. I am aware that there is still a long way to go before I can perhaps turn my passion into a profession, but my motivation is limitless and will help me reach this goal. When I came to the bLU cRU, I knew that it would not be easy to win it. It was the first time I rode an MXGP track and I was pretty impressed but I was determined. When I won the SuperFinale, I was very happy not only for myself but for all the people who believed in me and supported me. I want to thank Yamaha who I have been riding with for a few years for giving me the opportunity to participate in this race. I am really looking forward to starting this new adventure with my first team and to be participating in the EMX125 championship. Before that, I still have a whole winter of training in order to give my best for the opening of the championship. It’s exciting.

This journey with Yamaha has been a dream come true. First, we had to qualify in the country against my best friends, then the days during the MXoN in Mantova for which there are no words. Finally, I went to Spain two weeks ago for the Masterclass where I learned a lot from the best coaches and riders. It is so cool to know that I have won, I’m so happy and so excited, I can’t wait for the future.

I am so happy! I have been competing against some very good riders, but I gave everything I had and it paid off. It means that I can represent Yamaha and together we are going to make 2022 a good year. With Yamaha supporting me, I am sure that together we can make some very good results. I am proud and super happy.

I’m so pleased and happy for the great opportunity given to me by Yamaha, winning the Masterclass was a dream come true. I’m highly motivated and I will do my very best in next season’s Yamaha R3 bLU cRU European Cup. I hope to stay within this fantastic family beyond next year, and I thank those who believed in me!

I am very happy to be selected as the winner of the Masterclass. I really enjoyed the event and was really pleased to run in the 2022 Yamaha R3 bLU cRU European Cup. Thank you very much to everyone at Yamaha for the support and I’m already eager to start the next season.

If one word were to be used to sum up the 2021 Yamaha bLU cRU Masterclass then that word would be awesome! The Masterclass is always a huge emotional experience, but this fifth edition was the best ever. With more than 100 people involved, including 21 road racers and 13 MX riders, it was a real melting pot of nations, languages, cultures and, of course, talent. Every single rider there showed their skill and increased their knowledge during the event, where fundamental support was on offer from our bLU cRU Ambassadors; Brian Jorgensen and the Yamaha Ausio team in MX, and Andrea, Niccolò, Unai (on his debut as bLU cRU ambassador after his career progression in the bLU cRU project), the Yamaha MS Racing team and the JIR R3 bLU cRU European Cup organizer on the road track. The progression was clear to see after two days on track, which made the selection process extremely difficult for the Yamaha Motor Europe Racing Committee. But, after much deliberation, the winners of the YZ bLU cRU Cups and the two talented riders that will be part of the riders that will compete on the Yamaha R3 bLU cRU European Cup in 2022 were decided. I wish them all the best of luck as they chase their dreams with Yamaha during the 2022 season, but I would also like to commend every rider who took part in the Yamaha bLU cRU Masterclass on their skill, their commitment and their professionalism. I sincerely hope we'll see some of them again next year. A special thank you to our Yamaha distributors, bLU cRU team and operative staff, the managers of both tracks and our hosts at the hotel, as they showed great commitment to make the 2021 Yamaha bLU cRU Masterclass a resounding success.

The YZ bLU cRU FIM Europe Cup is an official European project designed to support young YZ riders that have a passion to race. Riders aged between 8 and 16 years old that race either a YZ65, YZ85, or YZ125 in one of the 23 FIM-approved national championships may enter. The top-scoring riders registered for the YZ  bLU cRU FIM Europe Cup in each national championship, 120 riders in total, will be invited to the SuperFinale, which will be held at one of the most popular MXGP rounds in 2022.

At the Superfinale, the top three riders from each class, along with two carefully selected wild card riders from each category, will receive an invite to the bLU cRU Masterclass, which takes place at the end of the season.

For more information or to sign up for the 2022 YZ bLU cRU FIM Europe Cup, click here.

It has been designed as the ideal first step for young riders with world championship aspirations. The series is contested exclusively aboard Yamaha's R3 machine, and the overall champion earns a supported spot on the FIM Supersport 300 World Championship grid for the following season.

Registration for the second edition of the Yamaha R3 bLU cRU European Cup opened on 3rd November and riders can still register for the 2022 season by clicking here.