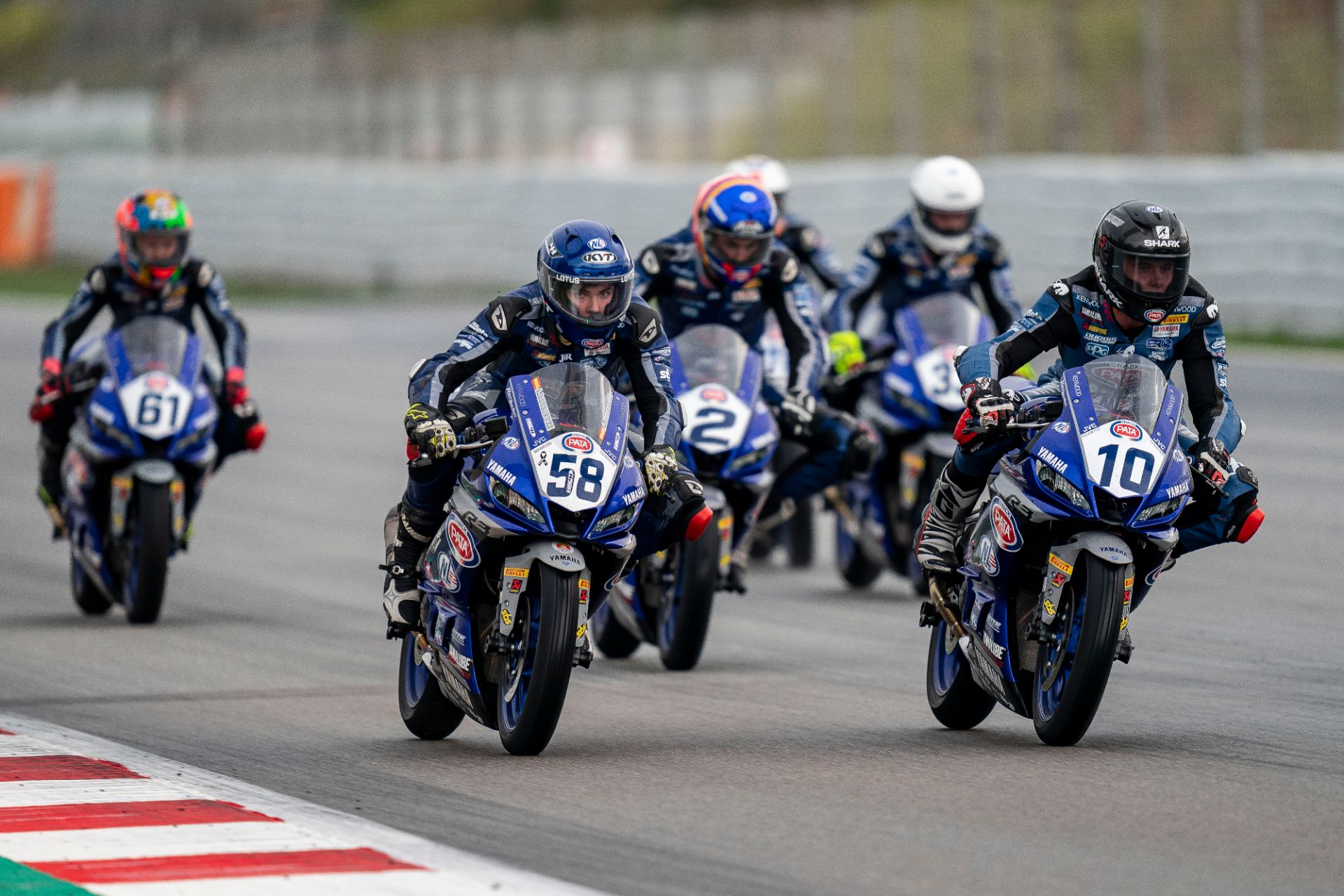 Yamaha Motor Europe is delighted to unveil the calendar for the 2022 Yamaha R3 bLU cRU European Cup, which will once again support the FIM Superbike World Championship at six rounds.

After a successful inaugural season, excitement is already building for the second edition of the Yamaha R3 bLU cRU European Cup with a high interest from around the world. Already, youngsters from Australia, North America and South America, alongside Europe, have registered their interest, as they look to take a step towards the pinnacle of motorcycle racing with Yamaha.

The 2022 campaign will get underway with a pre-season test at MotorLand Aragón on 18 March, where the youngsters, aged 14-20 for this year, will have the opportunity to acquaint themselves with their Yamaha R3 bikes.

The Spanish venue will also host round one of the Yamaha R3 bLU cRU European Cup on 8-9 April, before heading to Assen in The Netherlands on 22-23 April. The paddock will then have a six-week break, returning at Misano on 10-11 June, which hosted the first-ever round of the championship earlier this year. In July, the youngsters will race at Donington Park (15-16 July) and Most (29-30 July), with Magny-Cours hosting the finale on 9-10 September, where the second title-winner will be crowned.

The race weekend format will follow the same schedule as it did in 2021, with a 30-minute Free Practice session followed by a Superpole qualifying session. There will be two chances to fight for victory each weekend, with both races taking place on Saturday.

Whoever comes out on top at the end of the year will earn a supported ride into the FIM Supersport 300 World Championship with Yamaha for next season. Second in the standings will be offered a wildcard entry into the WorldSSP300 for the following season, as well as a 50 percent discount on their 2023 Yamaha R3 bLU cRU European Cup registration, which will also be awarded to the rider who finishes third.

Yamaha is also committed to making the racing as safe as possible, and so for this year, all riders will receive Gimoto race suits fitted with mechanical airbags, as well as an innovative ICE-KEY device that carries all medical and contact data in one easy-to-use application.

While the entry list is filling up fast, riders can still register their interest in the 2022 Yamaha R3 bLU cRU European Cup by clicking here.

We’ve had a very high interest once again for the second edition of the Yamaha R3 bLU cRU European Cup. This year, there will be six rounds made up of two races, and the youngsters will have the opportunity to ride at some of the best circuits Europe has to offer as part of the WorldSBK weekend. It is a great opportunity for youngsters to show how good they are in front of the manufacturers, teams and world championship riders, which will give them an extra advantage in their careers. We also have been very conscious of the safety of these young riders, and have made various changes to improve this aspect of the championship. We look forward to seeing the riders on track for the first time this year at the Aragón test, before the second season gets underway. 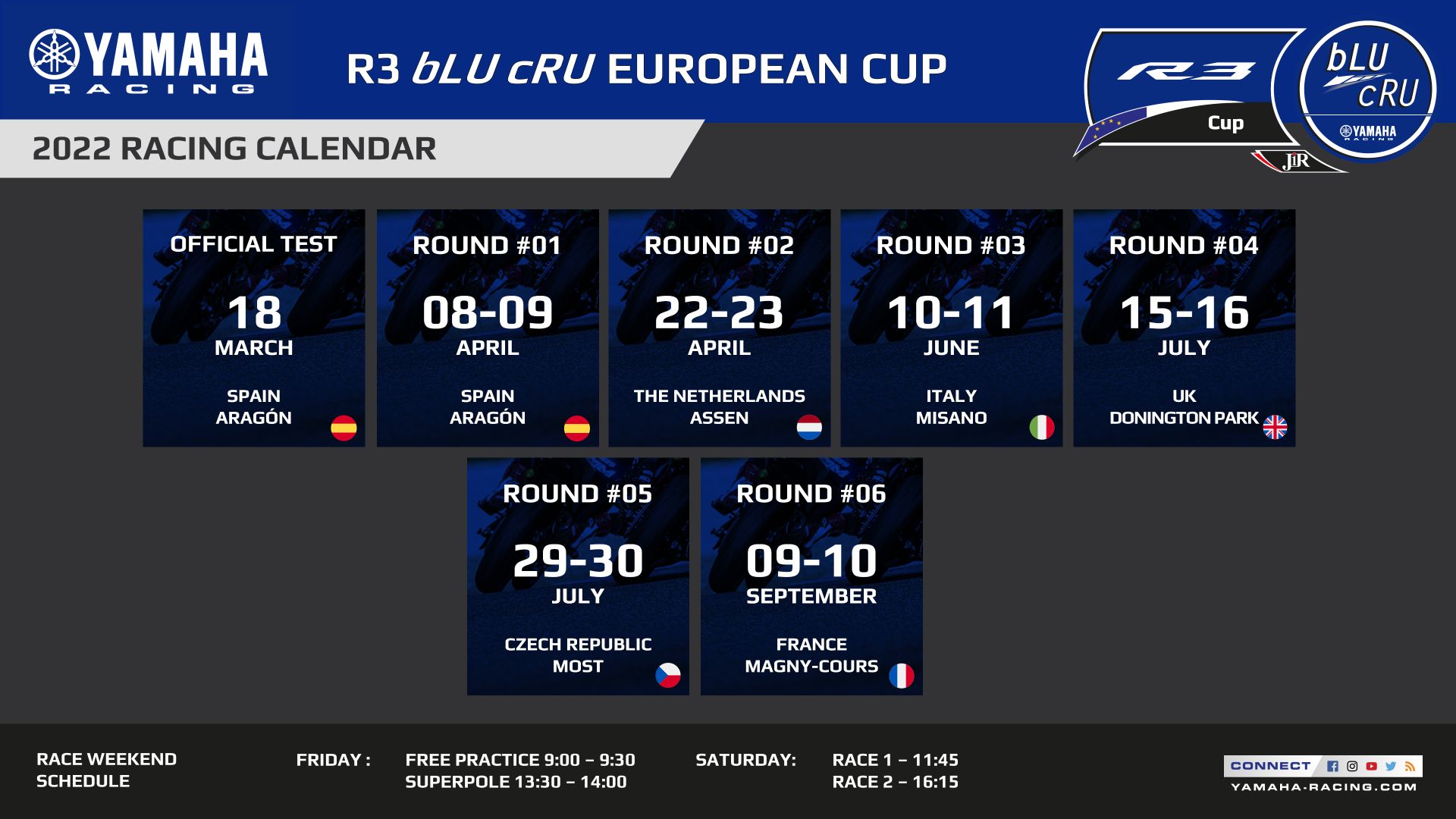