In a nail-biting Yamaha R3 bLU cRU European Cup finale at Barcelona, Spain’s Iker Garcia Abella was crowned the inaugural champion, and so earns a supported spot on the FIM Supersport 300 World Championship grid for 2022. 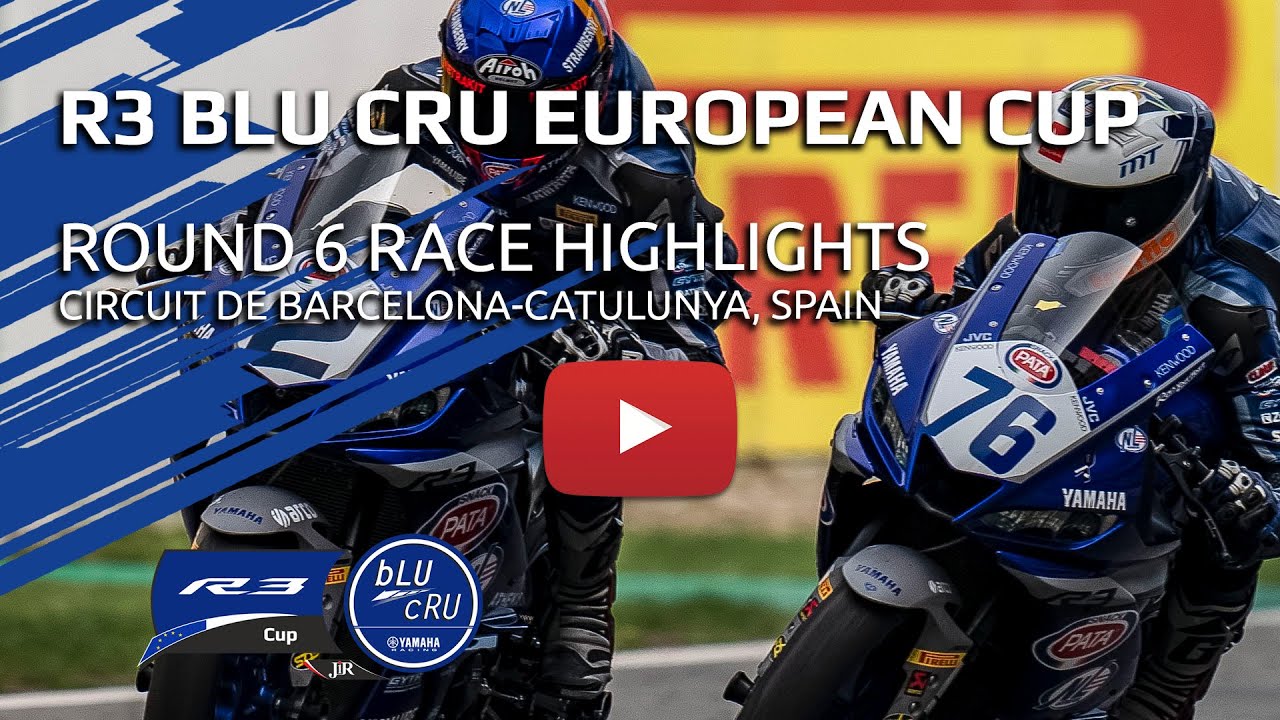 Garcia Abella’s Race 1 victory and his solid seventh-place result in the wet Race 2 saw him lift the title by four points over fellow countryman Julian Giral. Britain’s Fenton Seabright won the final race of the year, seeing him end the season third in the championship standings.

Both Seabright and Giral will get a 50 percent discount on their 2022 Yamaha R3 bLU cRU European Cup campaigns, while the latter will also have the chance to ride a wildcard event in WorldSSP300 next year.

Heading into the final weekend, five riders were all in with a chance of lifting the trophy, with Giral leading Garcia Abella, Slovakia’s Maxim Repak, Seabright and Spain’s Juan Antonio Conesa.

By the time Superpole rolled around though, all five of the title contenders qualified on the first two rows of the grid. 14-year-old Conesa scored his first pole position, with Seabright in second and Garcia Abella in third. Repak had made a step forward to line-up fourth, with Giral behind Peristeras in sixth.

In Race 1, the lead group consisted of 12 riders, with the five contenders all amongst the fight. That was until lap seven, when a multi-bike incident saw four riders DNF, including Repak, effectively dropping him from the championship running. The incident saw the top three pull a gap over the field, with Giral, Garcia Abella and Seabright all chasing the win.

Giral took the chequered flag first, but was handed a penalty for track limits on the final lap, which promoted Garcia Abella to the victory, with Seabright scoring a podium in third.

“It was a very difficult race, because in the first part there was a big group,” Garcia Abella said. “We went really fast and managed to pull a gap. On the last lap, my strategy was to pass Julian in the last corners, but it wasn’t possible. I was angry at the time, but when I got into parc fermé I was happy to get the win in the end.”

These results meant it was a two-way battle for the title in Race 2, with just one point separating Garcia Abella and Giral.

The wet conditions in Race 2 added to the suspense, and neither rider could find the pace to challenge for the lead. Peristeras and Seabright pulled away from the field, with Conesa settling into third. Meanwhile, Garcia Abella and Giral found themselves in a battle with several riders over fourth, with neither wanting to take any unnecessary risks over the nine-lap race.

In the end, Seabright took victory, with Peristeras scoring his best result in second. Conesa completed the podium, with Vich Gil crossing the line in fourth. Garcia Abella eventually came home in seventh, but with Giral only managing 10th, the 17-year-old was crowned champion.

“I am very, very happy. It’s an incredible feeling that I have now,” Garcia Abella said. “The day was really difficult, because in the first race I win but I only had one point to Giral. The rain was really hard and I was nervous going into the final laps, but I’m so happy to be the first champion. If I have a good motorbike, I know I can do good results in the WorldSSP300 championship.”

That concludes the inaugural Yamaha R3 bLU cRU European Cup season, which featured some thrilling races in support of the FIM Superbike World Championship. Registrations for the 2022 edition are set to open on 6th October, so stay tuned for updates.

Five riders headed into the weekend with a chance at the title. Considering the young age of these kids, and also the variable weather conditions, I must congratulate all of them for the way they managed the weekend. An incredible result for Iker for having won Race 1 and managing a solid result in Race 2, which were run in difficult conditions. This saw him become the first Yamaha R3 bLU cRU European Cup champion. Also congratulations to Fenton on his victory, he has been fantastic this year. We can be very proud of this first season of the Cup, where we have enjoyed races at a very high level, proving the value of this series, and I would like to thank all the people involved: the organisers, Gianluca Montiron, Alberto Barozzi. I would also like to wish all of these youngsters the best in their future careers. After the success of this year, it’s been nice to see the worldwide interest and soon the registration will open to welcome new youngsters, as well as hopefully welcome back some of the riders from this year.