The inaugural season of the Yamaha R3 bLU cRU European Cup headed to Autodrom Most last weekend, in support of round six of the FIM Superbike World Championship, and the title battle began to take shape, as Slovakia’s Maxim Repák enjoyed a dominant weekend, with the gap to series leader Iker Garcia Abella closing to 22 points. 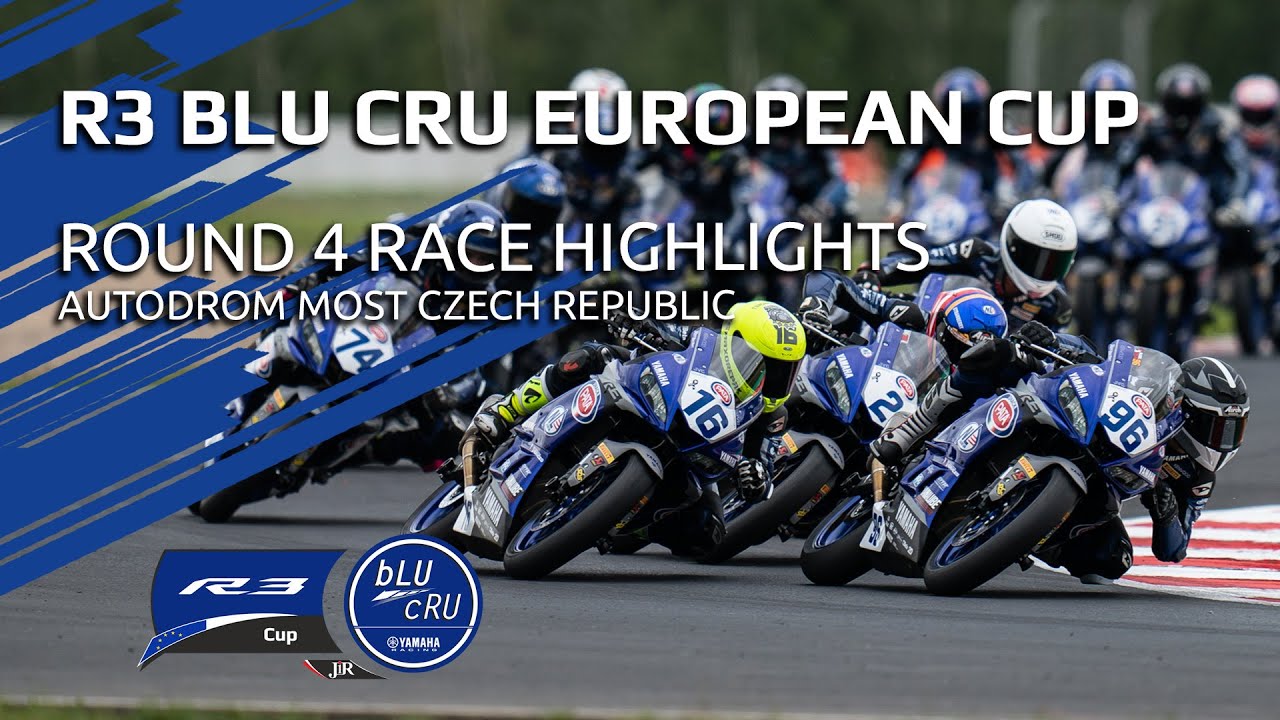 A new track on the calendar for the world championship paddock, the Czech venue witnessed its first double winner of the 2021 Yamaha R3 bLU cRU European Cup season, with Repák taking victory from pole position in both races.

The 24 riders, all aged 12-20 years old, got their first look at the Most circuit on Thursday’s track walk, and were set to kick of proceedings on Friday morning with a Free Practice session. However, with fog delaying the day’s running, the bLU cRU youngsters were forced to wait until that afternoon to take their Yamaha R3 machines out on-track.

Repák went fastest of all by 0.566s, with Britain’s Fenton Harrison Seabright second and Spain’s Juan Antonio Conesa Benito third. Garcia Abella and Brazil’s Humberto Maier ensured that all previous race-winners occupied the top five positions.
Qualifying was due to take place that afternoon, but heavy rain meant the session had to be cancelled, and the grids were set in Free Practice order.

With just 30 minutes of on-track running, the Yamaha R3 bLU cRU European Cup entries were thrown into the deep end in Race 1, but rose to the occasion with some superb performances. Repák built an early lead after initially dropping behind Seabright, who then fell, and by the halfway stage was already over four seconds ahead of the rest of the field. As the riders behind continued to battle, Repák maintained his healthy advantage until the line to take his first victory since the Misano opener.

“I had a terrible start and dropped to second position, then I was attacking Fenton but unfortunately he closed the front and he crashed,” Repák said after the race. “Then I had the lead and kept going with the same pace. I’m happy with this start to the weekend.”

In Race 2, 14-year-old Repák streaked clear again, but the six-rider battle for second provided some of the closest racing seen in the championship so far. Seabright, heading into this weekend second in the standings, fell at Turn 1 for a second time, seeing him leave the Czech Republic with no points.

As Repák claimed his third win of the season by a mammoth 7.767s, Giral made a final lap move to score back-to-back second-place finishes, with championship leader Garcia Abella crossing the line in third, while second to seventh were separated by just 0.56s.

“It was a great race today, I managed to pull away, I had no idea what gap I had,” Repák said. “When I broke away, I just knew I had to focus on lap times to put in 1’51s constantly, which I did. I was able to make a gap and take today’s Race 2 win. I’m very happy with the results and hopefully this will continue at the next round at Magny-Cours.”

The Yamaha R3 bLU cRU European Cup will return in a month’s time at the Circuit de Nevers Magny-Cours, France, (3-4 September) for the penultimate round of the 2021 campaign.

It has been interesting to see how bLU cRU youngsters have immediately been able to adapt to this new track. Everyone did a great job with our coaches and technical staff, we are proud of their constant progression. Weather conditions on Friday were not ideal for our Yamaha R3 bLU cRU European Cup competitors, after that the Superpole session was cancelled for excessive rain. A difficult moment for the riders that were unable to show their one-lap pace, but the correct decision by race direction to keep safety a priority. The races were very exciting for the podium contenders, and as we have often seen this year, the last two places were decided by tenths. Maxim was the class of the field - Most’s hero did a fantastic weekend with pole position and two victories, keeping true to his ‘Terminator’ nickname. A great atmosphere was possible thanks to the respectful behaviour of all of them, on and off the track, that made us very happy. A big thanks to all the Dorna and JIR Staff, and the FIM Europe representative, Martin Hejduc, who was very supportive to our championship. Just a few weeks and we will be at the fifth round in France at the fantastic Magny-Cours circuit. We will have new wild cards to continue giving opportunities to young talented riders that want the fantastic experience of the bLU cRU spirit. An exciting new round awaits us.