Witness all the best moments from the Yamaha R3 bLU cRU European Cup opener in Teruel, including an incredible 11-rider battle for victory, with our highlights from the two races. 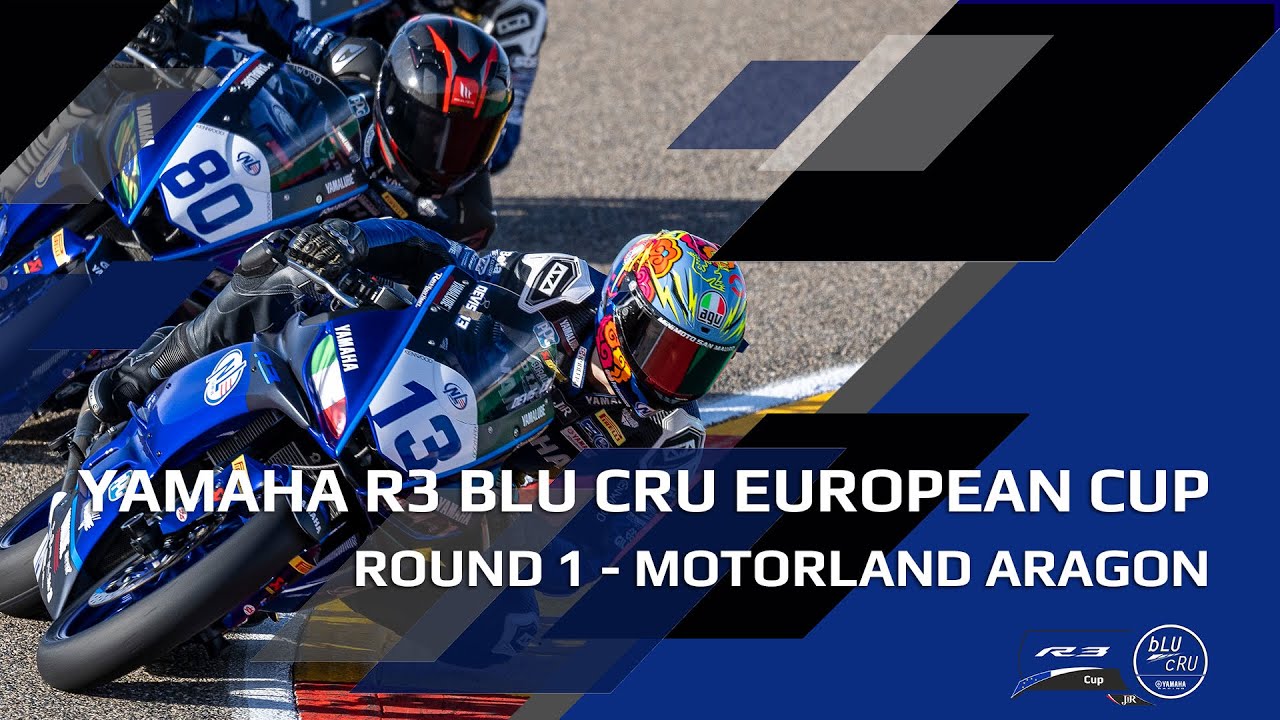 For 2022, 24 young riders from 12 countries, including nine from outside Europe, make up the world championship-supporting Yamaha R3 bLU cRU European Cup grid, all bringing varying levels of experience and success.

After a pre-season test here in March, the riders retook to the 5.344 km circuit for the track walk on Thursday. Friday’s Free Practice marked the first opportunity for the riders to show their performance and it was returning Brazilian Eduardo Burr who topped the 30-minute session, with Spaniard Yeray Ruiz and Enzo Valentim, also of Brazil, just behind the 15-year-old.

In qualifying, 18-year-old Ruiz took pole by 1.526s, as most riders behind struggled to put a clean lap together. Slovakia’s Maxim Repak was second fastest, while Italy’s Andrea Pizzoli joined them on the front row.

The first of the two nine-lap races saw a group of 10 riders battle for the lead in the early stages, but in the second half of the race, Ruiz and Valentim broke clear and went head-to-head for the win. In the end, the pole-sitter timed his move perfectly, beating his 17-year-old counterpart to the line by 0.273s to take victory on debut.

Just under four seconds further back, Devis Bergamini came out on top of the fight for third, with Kevin Fontainha and Marc Vich close behind in fourth and fifth.

“I am very happy to win the first race of the season,” Ruiz said. “It was not easy, I had a good battle with Enzo, but I did a good last lap to win. Thank you to everyone at Yamaha and in my team.”

In the second contest, fans were treated to a race-long skirmish out front, involving 11 riders. Several youngsters led, with it all to play for as they moved onto the last lap. As they headed down the backstraight, Italy’s Bergamini held on to take victory on his maiden weekend in the Cup, with Brazil’s Fontainha second and Ruiz third.

Indonesia’s Wahyu Nugroho was an impressive fourth, with Repak, one of last year’s title protagonists rounding out the top five. At the end, the top 11 were separated by just 0.783s, demonstrating just how competitive the competition is set to be in 2022.

“It was a tough second race with a lot of riders battling for the win,” Bergamini said. “I am really pleased to have taken the victory though and I’d like to thank my family, friends, Yamaha, Gianluca [Montiron], and everyone else who helped make this possible. It’s been a great weekend and I’m excited for the next one.”

The 2022 Yamaha R3 bLU cRU European Cup racers head to the TT Circuit Assen next for round two on 22-23 April.