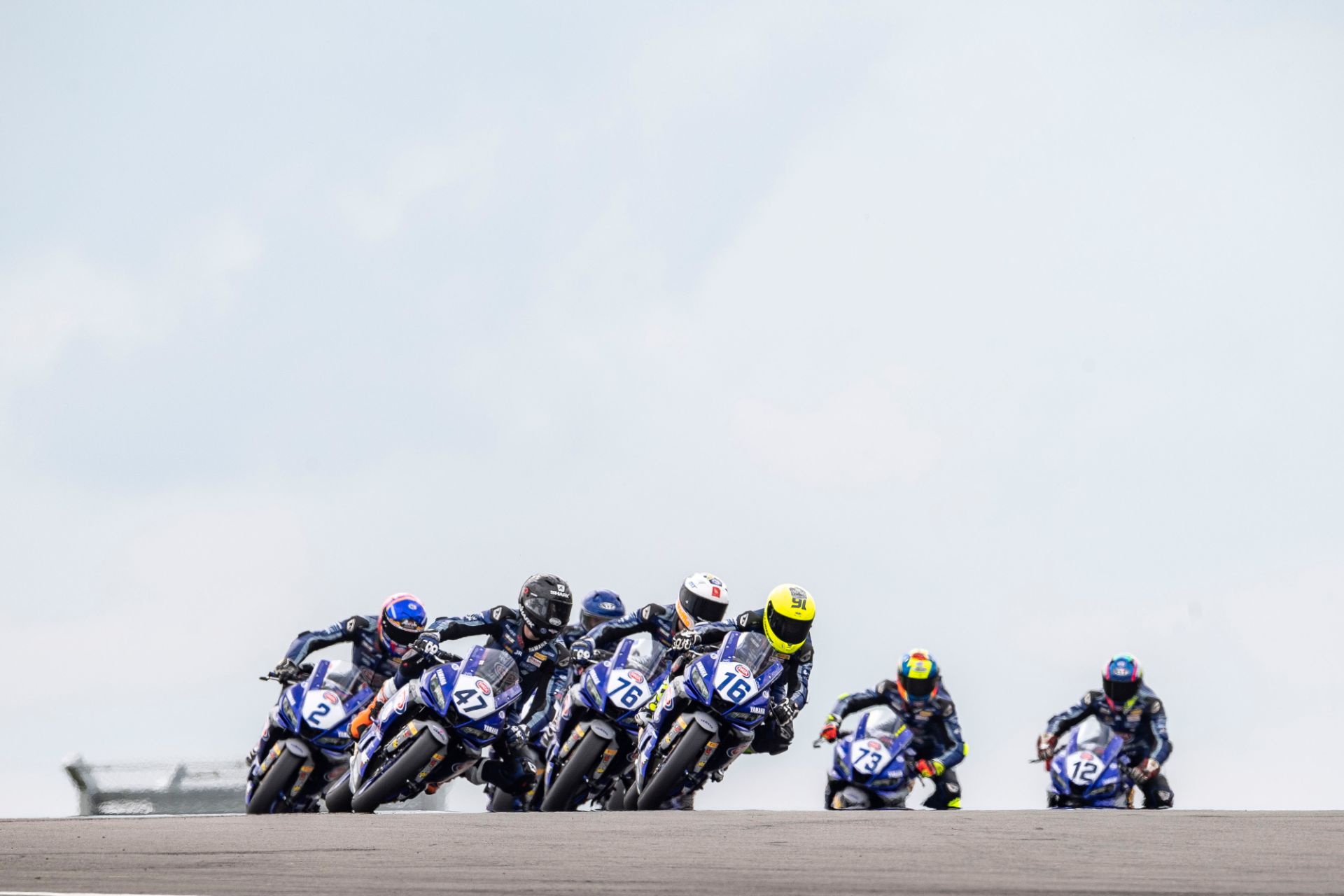 The 2021 Yamaha R3 bLU cRU European Cup returned to action in support of the FIM Superbike Championship last weekend, with the 25 young riders taking to the famous Donington Park circuit in the United Kingdom. The two races provided non-stop action in tricky conditions and saw two new winners crowned, and you can now watch all the highlights online. 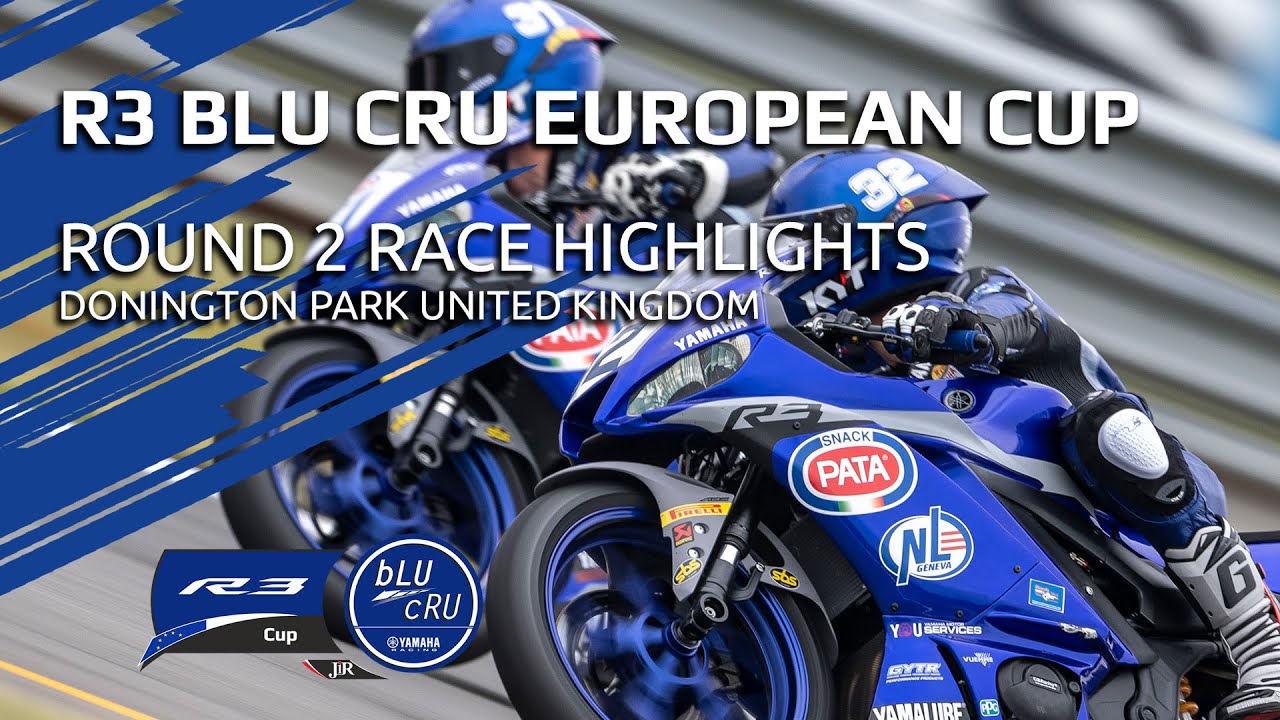 In the first wet race of the year, it was 14-year-old Juan Antonio Conesa Benito of Spain who came out on top, while British rider Fenton Harrison Seabright delighted his home fans, taking victory in Race 2 from pole position.

For many of the youngsters, Thursday’s track walk was their first-ever lap of the legendary British venue, with Pata Yamaha with Brixx WorldSBK rider Andrea Locatelli and his crew chief, two-time WorldSSP champion Andrew Pitt, stopping to speak to the bLU cRU riders, who were being guided around the 4.020 km circuit by official bLU cRU coach Lorenzo Alfonsi.

Also inside the paddock over the weekend was former MotoGP rider and creator of the American Racing Academy, John Hopkins, who was on hand to coach rising US star Kayla Yaakov.

On Friday morning, the riders, all aged 12-20, took their Yamaha R3 bikes onto the track for the Free Practice session. Grip levels were low but the 25 riders gained valuable experience, with Seabright going quickest of all, ahead of Slovakia’s Maxim Repák and Italy’s Giacomo Mora. Brazil’s Eduardo Agoston Burr and Spain’s Julian Giral ensured five nationalities were represented in the top five positions.

In the Superpole, a closely fought battle for pole position ensued, with Spain’s Iker Garcia Abella, winner of the opening Yamaha R3 bLU cRU European Cup race at Misano, Repák – also a winner last time out - and Seabright all trading fastest laps. In the end though, it was 19-year-old Seabright who came out on top, beating Repák’s time by 0.227s, with 16-year-old Brazilian, Humberto "Torquinio" Maier, third fastest, ahead of Conesa Benito and Spain’s Julian Giral, while Mora joined the two Spaniards on the second row.

Rain soaked the track for the first race of the weekend, with the conditions enough to catch out even the best riders in the paddock. On the sighting lap, championship leader Repák fell and was unable to take the start, giving the opportunity for other riders to close the points gap he had built at Misano.

Seabright led into Turn 1, but lost it on the exit and fell out of the running. That left Maier to take the lead, with the 16-year-old building a large advantage over the rest of the field. However, with two laps to go, Maier also fell out of the race and Conesa Bentio assumed the lead, taking victory to become the third different winner. Spain’s Iker Garcia Abella came out on top of the battle for second, ahead of Italy’s Edoardo Colombi.

“Very happy with the race, to get the win at this circuit is very special,” Conesa Benito said. “The rain made it difficult, I got overtaken by riders at the start but I was able to make some passes and keep a good pace. With two laps to go I started to catch the leader and I saw he crashed, which allowed me to take the lead and the victory. It was a great race, I was very happy with this.”

Race 2 was run under more manageable dry conditions, with seven riders battling for the lead in the opening stages. Repák’s bad luck continued when he fell out while challenging at the front, seeing him leave Donington with no points, while Conesa Benito, Greece’s Ioannis Peristeras, Giral, and Seabright all took it in turns at the helm of the field. In the end, it was Essex-based Seabright who took victory after a last corner overtake, with Giral second and Garcia Abella scoring another podium in third.

“It felt amazing to win to be honest, Race 1 was a bit of a silly mistake on my own, so a good way to recover from that,” Seabright said. “We reset the mind to concentrate on Race 2, I knew I just had to stay in the top three, which I managed to do. In this championship, it’s all about being in the right place on the last lap and I set it up perfectly. I know the last corner was a bit tight, but you got to do what you got to do, and I’m so happy to get my first win. I’m sure my mum will be proud of me for this one.”

Those results mean Garcia Abella now leads the riders’ championship after the British round, ahead of Seabright and Conesa Benito, with the series set to resume at the TT Circuit Assen on 23-24 July.

“It was a very difficult day, there was a lot of rain in the first race,” Garcia Abella said. “I just focused on scoring as many points for the championship and was pleased with the performance. In the dry second race, there was a lot of riders in the front group and it was quite difficult to make an overtake because off-line was very slippery. I’m very happy with this round and I hope that in Assen I can achieve another two podiums.”

“It was a hard task for our bLU cRU youngsters during this second round at the beautiful Donington Park circuit. They had to manage the unpredictable weather conditions, quickly learn what is a new track for most of them, and had their first experience racing in the wet in this championship. Our guys did a great job teaching the riders since Thursday during the track familiarization, with Lorenzo (coach) and Emanuele (Technical coordinator), and the bLU cRU ambassadors giving them some important tips. First race in fully wet conditions was a fantastic example of how competitive the riders are. It was amazing to see the young Brazilian, Yamalube R3 bLU cRU Cup winner Humberto, manage the tricky conditions on the track and lead some very strong riders. It was an unfortunate mistake that saw him fall and I’m sorry for this, but I’m also happy to see Juan Antonio get his first victory – he was fantastic and showed great maturity. This meant a big shake up of the standings after two of our championship contenders, Maxim and Fenton, fell. Fortunately, there were no serious issues or injuries for the riders that did fall in Race 1, and the teams did a great job to get all the bikes ready in time for the second race. This one was in dry conditions and it was another exiting race, with a superb final dash to the line for the bLU cRU youngster Fenton, who made a strategic overtake in last corner to win. I’d also like to congratulate the championship’s youngest rider, Dawid Novak (12), who got points in 12th, just behind the very talented young girl, Kayla. The racing has been awesome so far, and all are already preparing for the next round at the Assen circuit.