The eagerly awaited Yamaha R3 bLU cRU European Cup got off to a successful start at the Misano World Circuit Marco Simoncelli on 12th June, where it was the newest event on the FIM Superbike World Championship race schedule. The 27 youngsters, ranging in age from 12 to 20 years, treated the Italian crowd to two thrilling races on the Saturday, but you don't have to take our word for it, as you can now watch highlights from both races online. 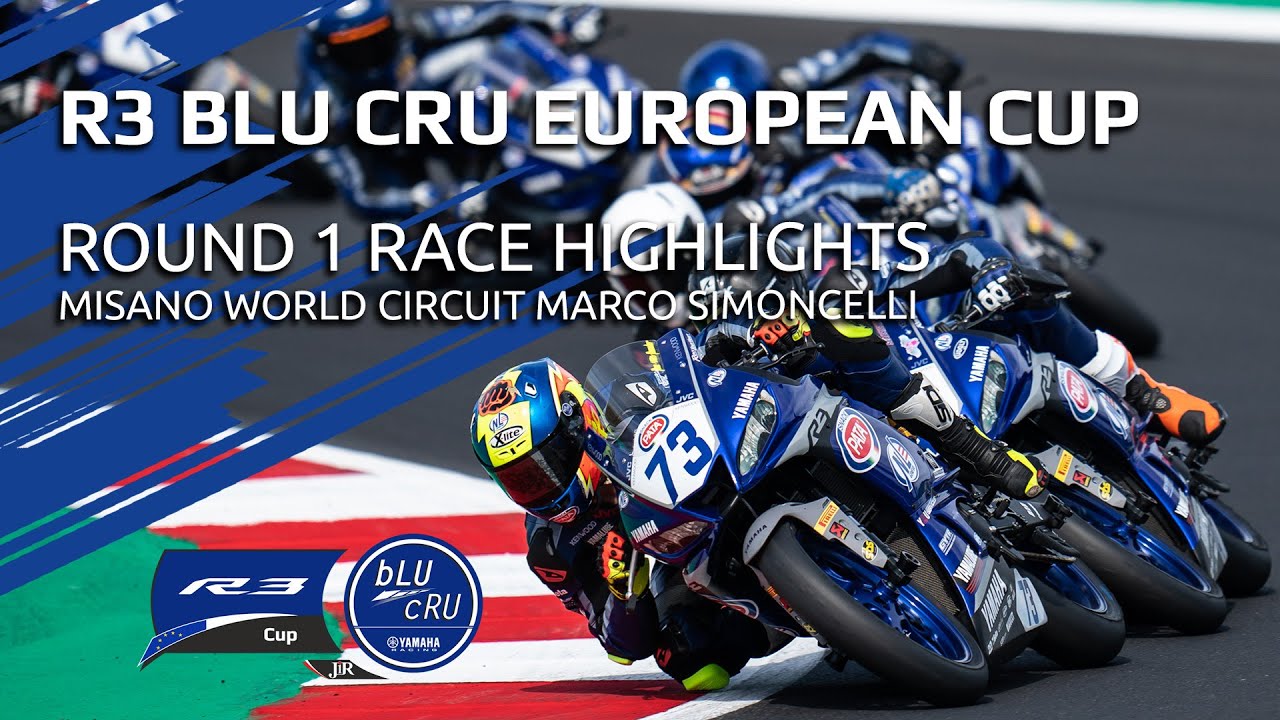 In the 10 lap races, held in front of spectators in the grandstands for the first time this season, it was 16-year-old Spaniard Iker Garcia-Abella and 15-year-old Slovakian Maxim Repák who got the best of two epic on-track battles to add their names to the history books as the championship's first race winners.

The Yamaha R3 bLU cRU European Cup riders got their weekend underway with a track walk on Thursday, during which 2004 European Stock 1000 champion and official bLU cRU coach Lorenzo Alfonsi advised them on the best way to tackle the 4.226 km circuit.

Friday morning saw the 27 riders take their Yamaha R3 bikes on-track for the first time, with a 30-minute free practice session. Wild card rider Matteo Vannucci topped the session, while eight countries were represented in the top 10, including 13-year-old Kayla Yaakov of the United States and Humberto "Torquinio" Maier of Brazil.

For the afternoon qualifying session, track temperatures neared 50°C making the challenge all the more difficult for the riders. Vannucci went quickest of all, becoming the championship’s first-ever pole-sitter, while the other riders closed the gap to the top. Alongside the Italian youngster on the front row was 18-year-old Spanish rider Julian Giral and Slovakia’s 15-year-old talent Repák, while Italian duo Giacomo Mora and Edoardo Colombi and Spain’s Garcia-Abella made up the second row.

The inaugural race got underway on Saturday, with all 27 riders getting through the first corner without incident. At the front, several riders battled for the lead, but it all came down to a titanic final lap battle, in which Garcia-Abella hit the front and crossed the line to take victory ahead of Repák and Britain’s Fenton Harrison Seabright.

All three were pleased with their performances, but none more so than the boy on the top step: “I’m very happy, it was a really difficult race because a lot of people had good pace,” Garcia-Abella said. “Heading onto the final lap, I had a good strategy to win. I very much enjoyed the race and I’m looking forward to Race 2 and getting another strong result hopefully.”

The second race began later that afternoon and the spectators and WorldSBK paddock got to witness another epic battle for victory. Pole-sitter Vannucci and Race 1 podium finisher Repák, nicknamed “Terminator”, traded places at the front all race long, but in the end it was the Slovakian who would go on to win, ahead of Vannucci, while Mora made it five different podium finishers for the weekend. 26 of the 27 riders made it to the chequered flag, as the youngsters demonstrated experience beyond their years to ensure fair and clean racing while on the limit.

Having finished second in Race 1 and first in Race 2, Repák left Misano with the championship lead: “It was a great race, I made a couple of mistakes at the start but I was in a good position,” he said. “Matteo pulled a gap at the front, maybe almost a second at one point, then we had a battle behind. I managed to get free of the fight and catch up to the leader. I saw there was a nice gap behind us, so I kept showing to Matteo that he should stay behind me so we could pull away. On the final long straight we were side-by-side and heading into the corner I took a really defensive line, and managed to keep him behind. Then I held it going through the final corner and just gave it full gas to the line for the victory.”

That concluded the first Yamaha R3 bLU cRU European Cup weekend, with no technical issues demonstrating the reliability of the Yamaha R3 bikes and the high level of support from the JIR mechanics.

The series will next head to the United Kingdom, supporting the WorldSBK championship once again, this time at the famous Donington Park circuit, where the youngsters will look to build on their promising performances from Misano.

Supporting the new racing generation has always been what the bLU cRU program is about, and what the 27 riders showed during the opening Yamaha R3 bLU cRU European Cup round was fantastic. We are very proud of them all, they followed our tips and managed their emotions. Considering that for most of them this was the first experience of being under the watch of the WorldSBK paddock, they held it together and put on two great races. They worked closely with our bLU cRU ambassador, walked around in the same paddock as some of motorcycle racing’s most prolific stars, so for these youngsters it has been a whirlwind of emotions. In all the sessions they barely put a foot wrong, and 10 riders were able to compete for the victory. All the rest of them showed their talent and I’m confident that they will close the gap to the front during the season. There was a great atmosphere amongst the riders, and they demonstrated the bLU cRU spirit with their respectful attitude. Special thanks to all the parents and the JIR staff, who worked hard, and I was very proud of the positive approach. All partners that have been a part of this project have been very supportive on the technical side, and ensured everything ran as well as it could have. Ready for the next round at Donington Park, where we’re eager to see how the bLU cRU riders will get on.