The FIM Superbike World Championship paddock headed to Portugal last weekend for round three of the 2022 season at Estoril, where Yamaha narrowly missed out on its first victory of the season in the hands of Toprak Razgatlıoğlu.

Andrea Dosoli, Yamaha Motor Europe Road Racing Manager, reflected on an overall positive weekend in terms of performance: “The races in Estoril were nothing less than thrilling in all the classes. Our teams and the riders faced difficult track conditions that didn’t make their job an easy one. But I’m quite happy to see that we’ve been competitive in all three classes. If we just had a little bit more luck, we could have come away from the weekend with even more in WorldSBK.

“It has been very useful to stay another day in Estoril for a test with the Pata Yamaha team, in order to address a weakness that we’ve seen in Race 2 – specifically the lack of traction in the last corner. It’s very beneficial to do these tests because we have a good comparison from the race weekend. We are confident in what we have found, and this will help the riders from the next race onwards.” Pata Yamaha with Brixx WorldSBK’s Razgatlıoğlu was within touching distance of victory twice in Portugal, with his miraculous save in the Superpole Race ensuring he kept his 100 percent podium record when finishing in 2022 intact.

Teammate Andrea Locatelli’s trio of top-five results, including fourth in Race 1, saw the Italian pick up the most points of any rider outside the three early championship protagonists.

“Talking about WorldSBK, it’s the closest we’ve been I believe to the victory so far this season with Toprak in amazing form. He enjoys riding his R1 at Estoril, he got back the good feeling with the bike and he has shown great performances throughout the weekend. In Race 1, he was just overtaken on the home straight before the finish line. This gave the team the motivation to challenge in the next races. It was tough because it was wet on Sunday morning, then we had a few drops of rain during the races, but it was still dry. Toprak in these conditions is a special one, he’s amazing. He had a gap over Johnny in the SPRC, but a small mistake on the last lap compromised the race. We have to consider that this could have been much worse had he not been able to make an incredible save.”

“Another solid result for Andrea. He has impressed everybody in Race 2, which was slower due to the track conditions compared to Race 1. He made a big step though in closing the gap to the top three. He must be happy and proud of this, especially as he made no mistakes at all in the races.” For the GYTR GRT Yamaha WorldSBK Team, Garrett Gerloff was unable to take advantage of his podium pace on Friday, with a highside at Turn 13 in Free Practice 3 causing a deep wound on his left knee, ruling him out for the races. Kohta Nozane enjoyed his strongest weekend of the season, twice finishing in the points.

Elsewhere, Marvin Fritz made his return to the WorldSBK paddock, replacing the injured Roberto Tamburini at the Biblion Motoxracing Yamaha WorldSBK Team.

“Kohta has improved well throughout the weekend. In Race 2, it was one of his best performances so far, fighting riders with much more experience than him. For sure, it’s another important lesson for him and it has allowed him to improve his riding style, and to reduce the gap to the leaders.

“It was an unfortunate weekend for Garrett, who has shown an impressive performance on Friday, going fastest in FP1 and ending the day third on combined times. During FP3, a big highside put an end to his weekend due to wound in his left knee. It’s a shame because we know what he’s capable of doing at Estoril and we were all expecting a good performance on this racetrack. We just need to look forward, he has seen a specialist, and even if the healing process takes some time, he will try to be back in action in Misano.

“We would like to also thank Marvin, who jumped in to replace the injured Tamburini. He only got the call while testing with the Yamalube YART Yamaha EWC Team at Spa-Francorchamps ahead of the endurance round there, so for him to step in on such short notice was great.” 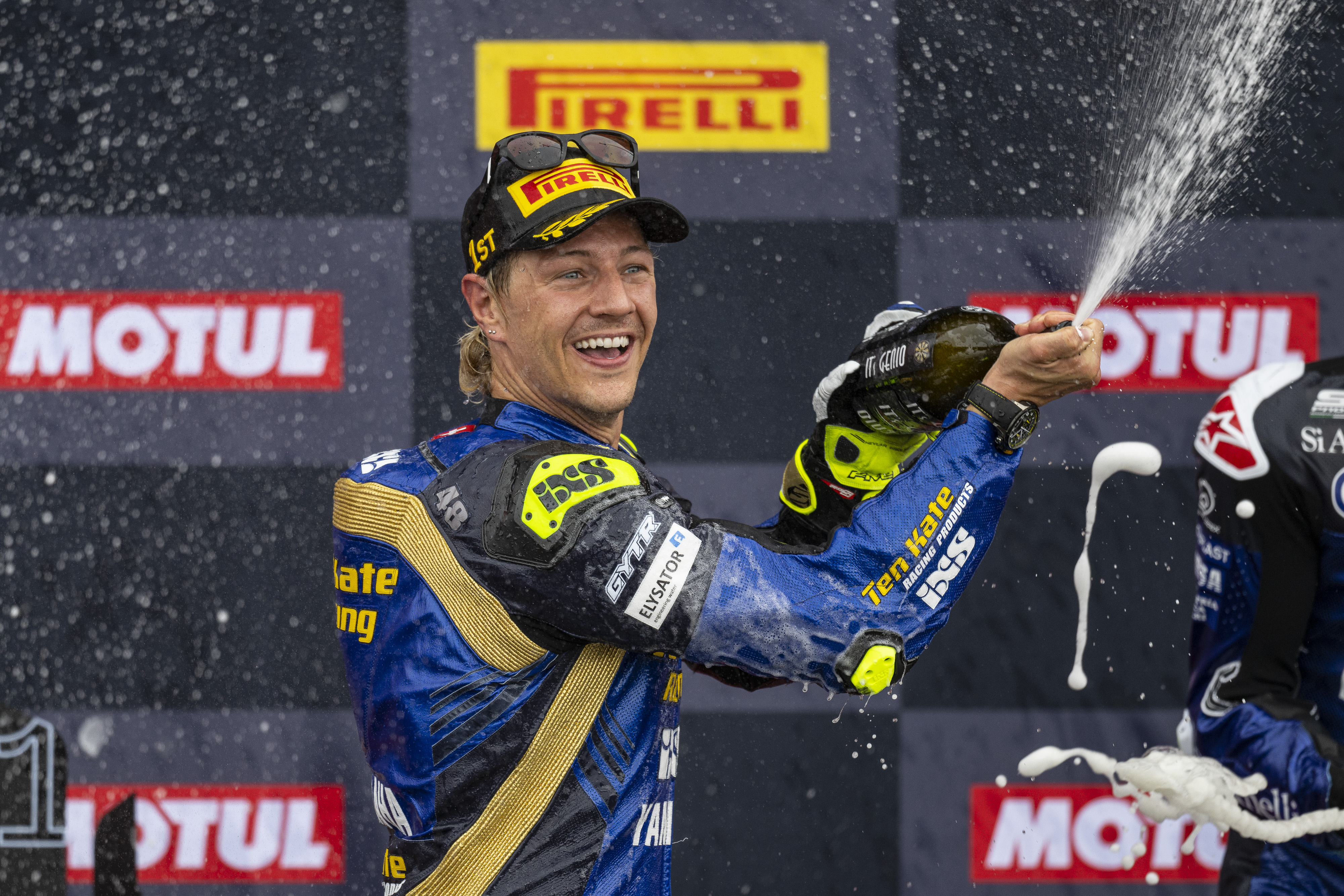 There was no stopping Dominique Aegerter in WorldSSP again this weekend, who produced a sensational qualifying lap before winning both races. The Ten Kate Yamaha WorldSSP Supported Team rider has now won the last five races in a row, extending his lead at the top of the standings.

Evan Bros Yamaha WorldSSP Supported Team’s Lorenzo Baldassarri joined him on the podium in both contests, with second and third, while VFT Racing’s Kyle Smith enjoyed a stellar Race 2 performance in tricky conditions to finish second from 17th on the grid.

“In Supersport, as in Superbike, we had very exciting racing with difficult conditions on Sunday. This couldn’t prevent Dominique getting another double win. After an impressive pole position, which he got by almost a second, he was able to control both races, so congratulations to him and the team. Clearly in this moment, he’s the one to beat in this class.

“I’m also happy to see that the other Yamaha riders are doing very well. In Lorenzo’s first season in the championship and on a track that’s almost new to him, he was able to score two podiums. Congratulations also to Kyle, he does his best when track conditions are most difficult and it was amazing to watch his comeback from 17th on the grid. It was an unlucky weekend, after a promising qualifying for the GMT94 Yamaha riders. They showed potential but unfortunately, they were not able to come away with good results. We are sure they can come back strong in Misano.”

WorldSSP300: Garcia Fires to Top of Standings after Winning Out Race 1 Duel

“It’s nice to see that Marc took the lead in the championship, winning Race 1 after a great battle out front and a solid result on Sunday. Alvaro Diaz may have lost the leadership in the standings, but he still showed great speed. We’re also happy for Mirko, who scored another podium and is showing a nice step forward compared to last season. We were able to give Enzo the opportunity to replace the injured Ton Kawakami this weekend, and it was nice to see that he was able to be competitive and gain good experience.”