Pata Yamaha with Rizla WorldSBK riders, Alex Lowes and Michael van der Mark, both have their sights set firmly on third place in the 2019 FIM Superbike World Championship standings, as they head to the final race of the season at the Losail International Circuit in Qatar this weekend. The Qatar race will also mark the end of an era, as WorldSBK race 2 on Saturday evening will be Marco Melandri's final competitive appearance ahead of his retirement from racing, after an incredible career that has spanned three decades.

It is Lowes who holds the advantage in the championship podium fight, with the 29-year-old Briton currently third in the standings with an advantage of just a single point over his teammate, van der Mark. But the two Pata Yamaha riders won't have it all their own way this weekend in Qatar, as on form Toprak Razgatlioglu has closed to within six points of Lowes in the standings courtesy of three podium finishes last time out in Argentina.

Lowes was a podium finisher in Qatar last year, finishing third in WorldSBK Race 1, but it was teammate van der Mark who stepped onto the championship rostrum in third place, following the cancellation of Race 2 due to adverse weather conditions. Lowes would like nothing more than to sign off four years aboard the Pata Yamaha YZF-R1 with a top three finish in the championship but van der Mark and Razgatlioglu will be out to thwart the Briton's ambitions this weekend.

GRT Yamaha Supported WorldSBK riders, Sandro Cortese and Marco Melandri, head to the Middle East determined to make amends for a disappointing outing last time out in Argentina. Melandri, who has endured a difficult season since finishing on the podium in the opening race at Phillip Island, will be hoping for a change in fortune in Qatar, his final race weekend before retirement.

Saturday evening's WorldSBK Race 2 in Qatar will be an emotional moment for Melandri, as the chequered flag will bring to an end a racing career unmatched by any other rider on the current WorldSBK grid. The Italian burst onto the world scene as a 15-year-old, winning the 125cc World Championship race at Assen in his debut season to become the youngest ever Grand Prix winner, a record that stood for a decade. The highlight of Melandri's long and distinguished career is undoubtedly the 250cc World Championship title he won in 2002, but he has also won races in every single class he's contested, including MotoGP, the pinnacle of two-wheeled motorsport.

Loris Baz is another rider heading to Qatar hoping for a change in fortune. The Ten Kate Yamaha Supported WorldSBK rider was forced to sit out WorldSBK Race 1 in Argentina as a result of a hand injury sustained in a qualifying crash. The Frenchman then crashed out of the Superpole Race on Sunday morning before salvaging his weekend with a points scoring finish in WorldSBK Race 2 later the same day. Baz has been focused on recovery ahead of the Qatar weekend, where he will resume his quest for a maiden podium finish aboard the Ten Kate Yamaha YZF-R1.

The Losail International Circuit is located 30km north of Doha, the capital city of Qatar, and is unique in that it plays host to the only night race on the WorldSBK calendar. The 5.38km track is made up of ten right and six left-hand corners with a start finish straight that is over a kilometre in length.

A mix of fast-flowing corners and slower technical sections, the circuit is a firm favourite with riders and fans, both of which enjoy the challenge and spectacle of racing under floodlights.

The Qatar race weekend follows a different schedule than most, with action taking place in the early evening from Thursday to Saturday. The Yamaha WorldSBK riders will take to the track for Free Practice 1 on Thursday afternoon at 17.00 local time, with qualifying scheduled for 17:30 on Friday. Race 1 on Friday and Race 2 on Saturday are both scheduled to get underway at 20.00 in the evening, with lights out for the Superpole Sprint Race at 16.00 on Saturday afternoon.

It's the final race weekend of the season and my last appearance for the Pata Yamaha WorldSBK team this weekend in Qatar, a track I really like. My goal is to enjoy the weekend with a team with whom I've formed a really strong bond and in which I've made some really good friends. I head to Qatar determined to finish my time with the team on a high and to fight for third place in the championship. The track is really flowing and the triple right-hand corners are probably my favourite sections on the whole of the WorldSBK calendar. The fact that we race under floodlights, which is a unique experience, makes it a pretty cool end to the season and I can't wait to get there and kick off the weekend.

It's going to be a very exciting season finale, that's for sure. Just six points separate me, Alex and Toprak in the fight for third place in the championship standings, which means the goal this weekend has to be to fight for the podium in all three races. I'm pretty confident we can do that in Qatar, as it's one of my favourite tracks and one that is well suited to our Yamaha R1. I'm looking forward to the weekend ahead, as it should be a fantastic end to the year.

Qatar will be my last race weekend before retirement, which means I head there with mixed emotions. On one hand I'm a little sad because racing has been such a huge part of my life and I had hoped to bow out on a higher note, as the results this season don't reflect my potential and are not how I want to be remembered. Conversely, I'm also happy to have made the decision to stop, especially after such a difficult season. I'm proud of what I've achieved in my racing career, but now it's time to turn the page and start a new chapter in my life. Qatar is a beautiful place to race, especially under the floodlights, and I'll have many friends around me this weekend as I race for the last time. The goal is to finish as I started, by giving it my all and pushing for the best result possible.

I'm really looking forward to the final race weekend of the season at the Losail International Circuit in Qatar, as it's one of my favourite tracks on the calendar. It's a great layout and racing under floodlights makes it a great race at which to end the year. I'm happy to be back on the bike so soon after Argentina, which was a bit of a difficult weekend for us. My goal in Qatar is to give everything to show the full potential of the Yamaha R1, the team and also myself, to secure a good result in all three races and to round out the season with a top ten finish in the overall championship standings.

The week has been mostly about recovery after the two crashes in Argentina. I've had an assessment of the injuries and, I'm happy to say, there's nothing to be concerned about. My back is still a little bit tight, but physiotherapy should remedy that before we head into the final race weekend of the season. I always enjoy racing in Qatar; the layout of the track is great and it's always really special riding in the dark under the floodlights. We know from Alex's performance last year that the Yamaha R1 works well there, so I hope we can start with a strong base and finish the season on a high note, hopefully with the podium finish that has proved so elusive so far and tenth place in the championship. That's the target. 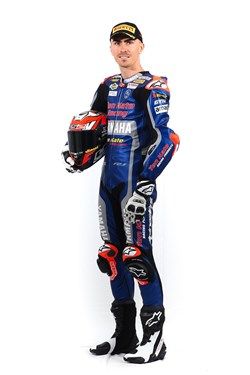