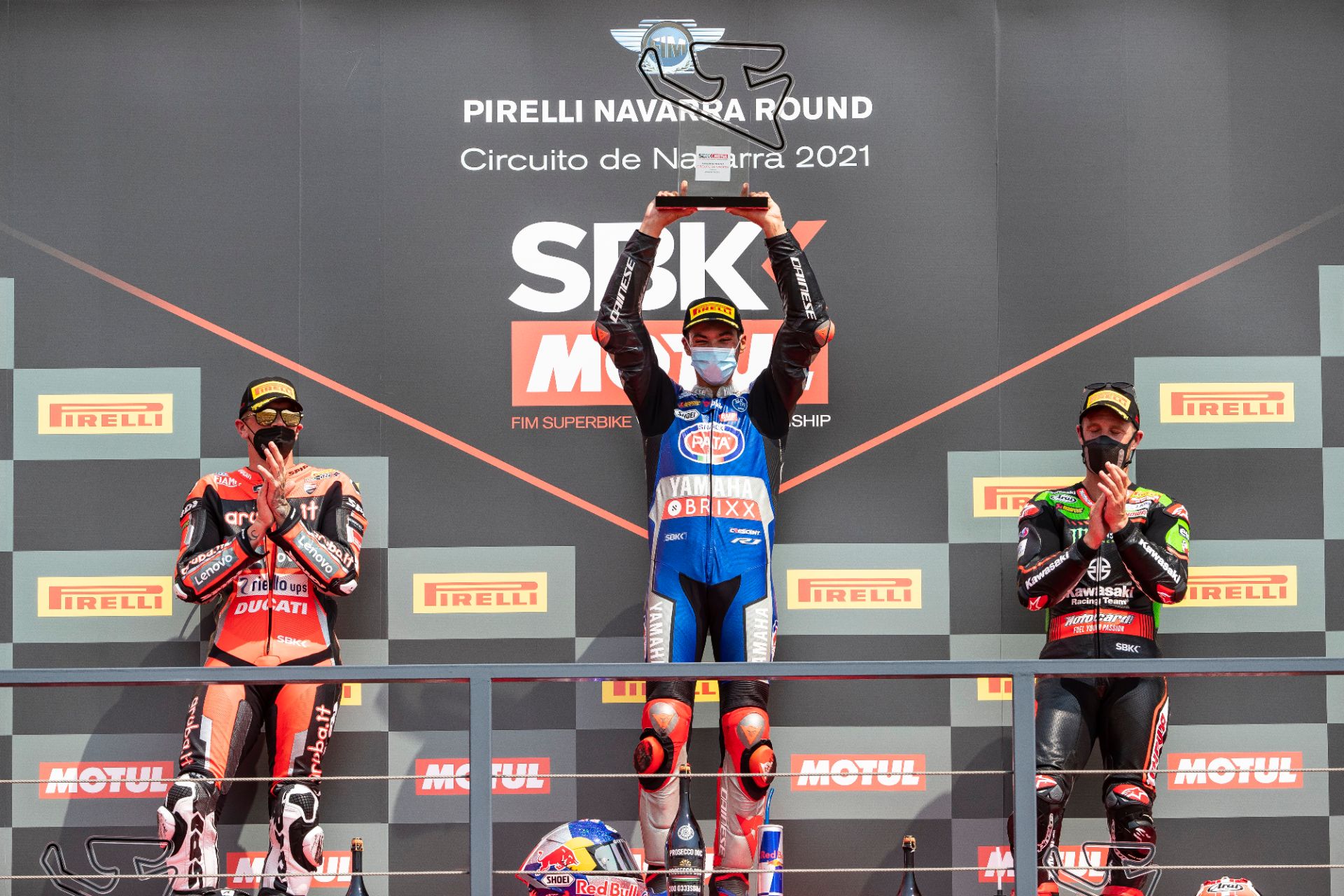 The Navarra track provided numerous challenges for the world championship riders and teams, due to its twisty and bumpy nature making it very physically demanding, further intensified by the hot temperatures witnessed throughout the weekend.

Andrea Dosoli, Yamaha Motor Europe Road Racing Manager, was impressed with how the Yamaha riders were able to adapt to this new challenge, and how Razgatlıoğlu was able to retake the lead in the riders’ standings after a superb Sunday performance.

“It was nice to race in Navarra, a race track that is new to the WorldSBK and WorldSSP riders,” Dosoli said. “It was a very hot weekend, and the circuit itself had a unique layout with a lot of tight corners, as well as a bumpy surface, which made it very demanding on the riders. It was also very demanding for the teams in order to properly set-up the bikes. We are happy to say that our guys have done a very good job to the point where we are back in the lead of the WorldSBK riders’ championship. It was nice to see three very tight races, confirming the level the championship has achieved this year. There are three riders fighting every single weekend, making it very interesting. It was great also to see how our rookie, Andrea Locatelli, has been able to confirm his speed.”

Things were looking positive for Razgatlıoğlu on Friday, when he went second-fastest on combined times. However, a difficult Superpole put him on the backfoot, with the Turkish rider forced to start from eighth on the grid. In Race 1, Razgatlıoğlu was able to battle his way to the podium, finishing third with the two leaders building an early unassailable advantage as the 24-year-old made his way through the group.

On Sunday, the Pata Yamaha with Brixx WorldSBK team worked to give Razgatlıoğlu a chance to fight for victory. Another third-place finish in the Superpole Race gave him a better grid slot for Race 2, helping him get into the lead battle right from the get-go. The #54 rider fired into the lead early on and controlled his pace from there to take victory, seeing him leave Spain level on points at the top of the championship.

“Toprak did another great weekend after a difficult Saturday, where our competitors were able to improve more than others. He had a disappointing Superpole, but never lost the concentration and got the best possible race he could during Race 1 and the Superpole Race. Third place is great considering he had to come from quite far back, and it was nice to see the maturity and determination from Toprak to give himself an improved grid spot for Race 2, and also the hard work from the team to put him in a position to take victory. The way he was able to manage the gap behind, but also to maintain a very fast pace was impressive. So, congratulations to him and his team for the great job.”

On the other side of the Pata Yamaha with Brixx WorldSBK garage, 2021 rookie Andrea Locatelli continued his fine form. After topping Free Practice 3, the Italian managed to score his best qualifying result in fourth, which is where he went on to finish in all three races, and was comfortably best-of-the-rest behind the championship’s three protagonists.

This means the 24-year-old now moves into fifth in the WorldSBK riders’ standings, with just 18 points between him and Kawasaki’s Alex Lowes in fourth.

“For Locatelli, honestly this has been another very positive weekend. It was the third race in a row where he proved to be one of the fastest in the championship. He has been consistent without making any mistakes, but he also showed that he knows when to be aggressive, which was clear in Race 2 where he wanted to stay with the top guys after being forced wide and lost some positions at the start. This confirms that he’s made another step, and that he’s continuing to learn and improve. We’re glad to see his consistency has allowed to move up to fifth place in the championship and he can now clearly aim to finish fourth overall. Andrea is also a great team member and person, his relationship with the crew and Toprak helps everyone within the team a lot.”

At the GRT Yamaha WorldSBK Team, Garrett Gerloff’s difficult race starts meant he could only claim a pair of ninth-place finishes, in Race 1 and the SPRC, while he was taken out on the first lap in Race 2, while chasing an improved result.

Teammate Kohta Nozane enjoyed his best weekend so far, despite having limited track time at Navarra during the test, where he crashed and injured his finger. The Japanese rider scored his best feature race result with 11th on Saturday, matching that in the SPRC, while he fell on the final lap from 12th in Race 2.

GIL Motorsport Yamaha’s Christophe Ponsson was twice in the points, finishing 15th in Race 1 and 13th in Race 2, continuing his good run of form since Most.

“Garrett was unable to realise his full potential in Navarra with two difficult starts in Race 1 and the SPRC, meaning he had to work his way back through the order. We saw a reaction to this in Race 2, where he had a better first few corners and was looking very strong, before he was taken out of the race by another rider. For sure, we are convinced that he could have done a good race, but we know he will be able to bounce back as he’s one of the fastest riders in this championship. Magny-Cours is a good circuit for him, so I expect him to be right up there again in just over a weeks’ time.

“On the other side of the garage, we saw a big step forward in terms of performance by Kohta at Navarra. He had to learn the track again on Friday as he did not manage to do very many laps in testing, and in the races we saw him fighting just outside the top 10. In Race 1, he was feeling unwell towards the end of the race, which is why we saw quite a big drop-off in performance, but in all three races he showed great speed and that he is able to be aggressive at the starts to put himself in good positions. It’s been nice also to see Christophe fighting for points again, which is motivating him and his crew for the next races.”

“On a new race track to almost everybody, again we’ve seen a very strong performance from Aegerter. The way he managed the races and his ability to push during the last laps showed that he was in control, so congratulations to him and Ten Kate Yamaha for these results. A good weekend also for the double second place of Odendaal, he’s right there and we’re sure that we’ll see him push to catch Aegerter in the coming races. We’re glad to see Bernardi back on the podium, with two very strong performances that confirm his progress. Gonzalez also showed very impressive speed and he was unlucky with the crash in Race 1 that forced him to miss the second race. We wish him a speedy recovery and to be back in the fight at Magny-Cours.”

Next up will be Magny-Cours, which will see the WorldSSP championship, FIM Supersport 300 World Championship and Yamaha R3 bLU cRU European Cup, supporting the eighth round of the WorldSBK championship.