Yamaha Back to Winning Ways in Misano WorldSBK Round Yamaha Back to Winning Ways in Misano WorldSBK Round

In Sunday’s Superpole Race, Toprak Razgatlıoğlu stunned the 65,000-strong crowd at the Italian FIM Superbike World Championship round to give Yamaha its first win of the 2022 season, with the manufacturer also taking a clean sweep of victories in the supporting categories.

Alongside Yamaha’s successes in the three world championship classes at the Misano World Circuit ‘Marco Simoncelli’, there was a record 28 riders participating in the Yamaha R3 bLU cRU European Cup, while the Yamaha R7 Cup also ran in support for the first time.

Yamaha Motor Europe Road Racing Manager Andrea Dosoli shared his thoughts on the spectacular Misano weekend: “We have been pleased to see that in Misano we had a huge public attendance. It was nice to see the interactions with the fans and we could really feel their passion in Misano. More than 65,000 spectators means that there is a lot of interest in the WorldSBK platform. We have seen fantastic races in very good weather conditions. The high temperatures have been demanding on the riders in these long races, but despite this we have seen fantastic performances in all the classes. With the R3 and R7 Cups also supporting this round, Yamaha had a great presence in the paddock.” WorldSBK: Razgatlıoğlu Back on Top with Dominant SPRC Performance

Pata Yamaha with Brixx WorldSBK’s Razgatlıoğlu bounced back from Saturday’s electrical issue to score a dominant first win of 2022, before capping off his weekend with a second-place finish.

“In general it has been a positive weekend, with the first win for Toprak in the Superpole Race on Sunday morning. The win is a testament to the great job done by the team after their disappointment of Race 1, where a possible P2 has been prevented by a minor electrical issue. A strong reaction on Sunday by the team, who clearly improved the set-up to allow Toprak to show his talent in the Superpole Race. He continued this momentum in Race 2 and did a fantastic first half of the race, but when he saw that Bautista had a bit more he decided to protect the second place." Teammate Andrea Locatelli’s trio of sixth-place finishes saw him retain fourth in the standings, while GRT Yamaha WorldSBK Team’s Garrett Gerloff recovered from a difficult qualifying to take a pair of top 10 finishes.

On the other side of the Italian team’s garage, Kohta Nozane rode to his best finish of the season, with 12th in Race 1, while a right collar bone fracture to GIL Motorsport Yamaha’s Christophe Ponsson put an early end to his weekend. Yamaha Motoxracing WorldSBK Team’s Roberto Tamburini was twice in the points at his home round, finishing 11th and 12th.

“Andrea struggled during the first laps, which is where he is usually strong, but he had great pace later on. He had better speed than the results show, but three sixth-place finishes still means good points for the championship. It was nice to see Garrett back after the injury sustained in Estoril, even if he was not 100 percent fit. He did two strong races, despite the fact that the qualifying wasn’t quite what he expected. It was nice to see him recover positions and keep a small gap to the front. Unfortunately, a crash during the early laps of Race 2 has prevented him to confirm this positive trend. Kohta himself was hoping for a bit more in Misano, a track that he has tested at, but he had a solid performance in Race 1 to get 12th. Roberto was back from his injury and despite this he was able to enjoy strong races, but unfortunately Christophe was injured in Race 1, so we wish him a speedy recovery and hope he can back in time for the next races.”

It wasn’t easy for the championship leader though, as Evan Bros Yamaha WorldSSP Supported Team’s Lorenzo Baldassarri battled hard with him in both races. The Italian crossed the line in first on Saturday before a penalty for track limits dropped him behind his Swiss rival.

“The WorldSSP class has offered two fantastic races with an incredible fight until the last corner. Dominique has won both races again, already his seventh of the season so far, but this time it was possibly the most difficult with Lorenzo also showing fantastic pace at his home track. He was very close to victory in Race 1, but the small track infringement on the final lap meant he just missed out. These two riders together with their teams are enjoying a fantastic season, so congratulations to both of them and we’re looking forward to seeing how this battle will continue in the next round at Donington.” The Italian was unable to take part in Race 2, having been taken to hospital for precautionary checks after an incident in the Warm Up. Diaz charged to his second victory of the campaign with a brilliant ride from 13th on the grid on Sunday, and now leads the championship standings.

“Again, a double win for our boys in the WorldSSP300 class. It has been very nice to see the progression shown by Matteo. For sure he knows this race track, and he confirmed his speed in Misano with pole position and a fantastic race win, with a tight fight in the last lap with Alvaro. Clearly, he is confirming his talent, but unfortunately a crash during the Warm Up prevented him from taking part in Race 2. We are happy that the rider is OK and he will be back again at the next one. Congratulations also to Alvaro for winning Race 2 and fighting hard on Saturday. He’s now the new leader of the championship with a 20-point gap to second placed Marc Garcia, who struggled a bit here, but we’re sure that at the next round he’ll be there. It was also nice to see Alfonso Coppola back and showing good speed to be very close to the podium in Race 1.” 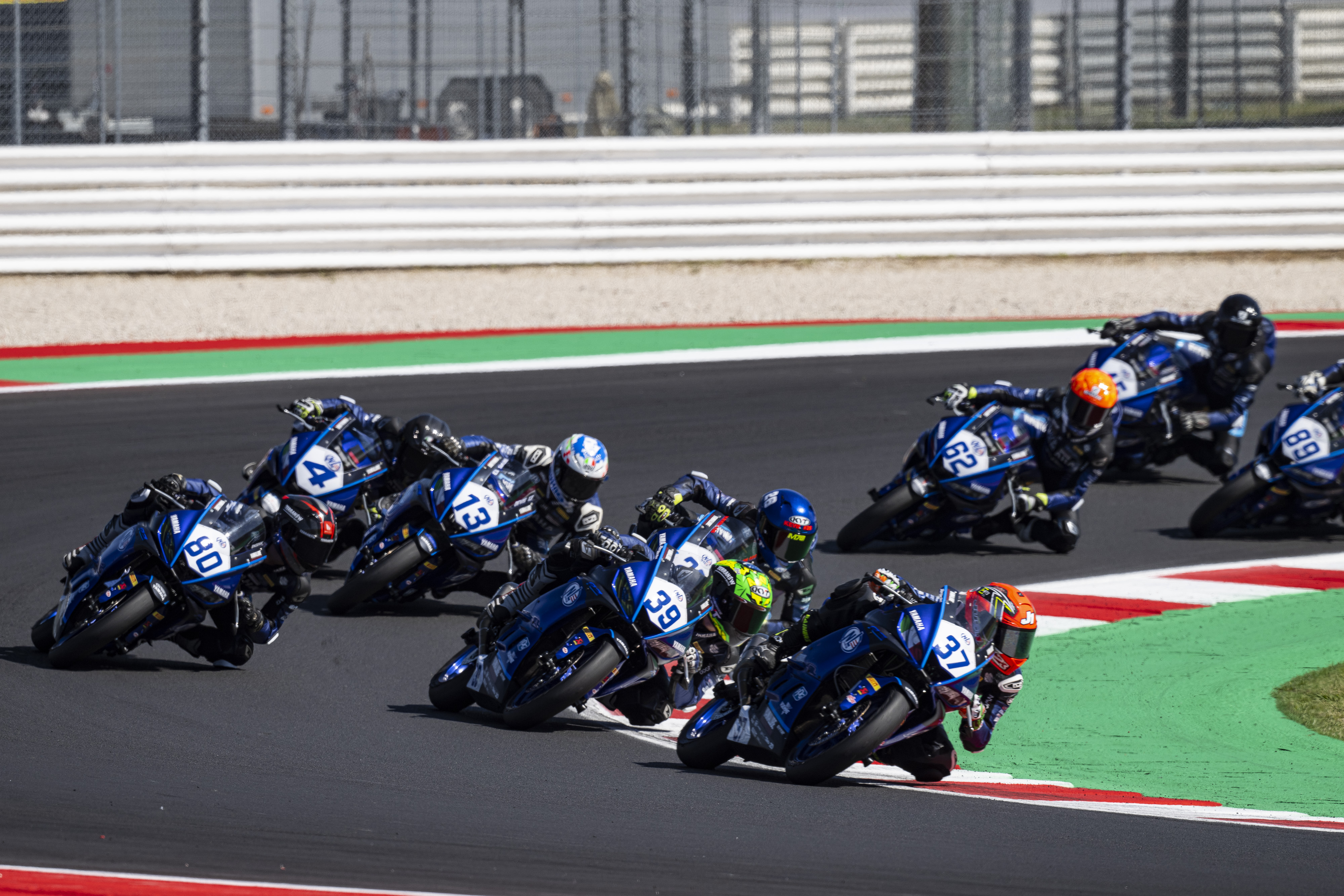 After coming close in the previous rounds, Andrea Pizzoli took an emphatic win in front of his home crowd from pole position in Race 1, while championship leader Enzo Valentim once again positioned himself perfectly on the final lap of Race 2 to take his third win of the 2022 season.

“It was great to see that the grid was almost completely full, and it would have been if we had all of our full season riders fit and available. We had a lot of wildcards, which shows that this program is working really well. Congratulations to Andrea for scoring his first win after his maiden pole position, and also to Enzo, who extends his championship lead. He’s been very consistent throughout the first three rounds and for sure he’s a strong candidate for the title already. It was nice to see Josephine Bruno joining the championship for this round, as well as another new country being represented, the United Arab Emirates, increasing the non-European riders there to 10.”