The 2022 FIM Superbike World Championship finally got underway last weekend at MotorLand Aragón, where Yamaha kicked off its ‘Triple Crown’ title defence with its best result at the Spanish circuit since 2011, courtesy of reigning champion Toprak Razgatlıoğlu’s third-place treble.

Alongside the WorldSBK championship, Yamaha enjoyed plenty of success in the supporting categories, winning each of the FIM Supersport World Championship and FIM Supersport 300 World Championship races, while the second season of the Yamaha R3 bLU cRU European Cup got underway with two enthralling contests. Yamaha Motor Europe Road Racing Manager Andrea Dosoli reflected on this encouraging first round of 2022.

“We can be satisfied about the Aragón weekend. In WorldSBK, this has been the best result at this track since we returned to the championship. It has been a very positive start, not only in terms of results, but in terms of pure performance. We now also have six Yamaha R1 bikes in the WorldSBK championship, more than any other manufacturer. It has been tough for our teams and engineers, as for the first time we had warmer weather conditions, so we had to adapt our set-up and approach to compensate for this. It’s also encouraging to see that Yamaha has brought competitive packages in WorldSSP with the R6 and in WorldSSP300 with the R3. I’m sure we’re in for an exciting season in all three classes.” Running the #1 for the first time during a race weekend, Pata Yamaha with Brixx WorldSBK’s Razgatlıoğlu produced a stunning flying lap in qualifying to take pole position, breaking the lap record in the process. The Turkish rider was then embroiled in a titanic battle for the podium in all three races, and leaves Aragón just 18 points off the top of standings, having been 27 adrift after the opening round last year.

Razgatlıoğlu's teammate Andrea Locatelli enjoyed a promising start to his second season in WorldSBK, qualifying on the second row of the grid. He was a comfortable fifth in Race 1, matching that in the SPRC where he finished just 1.615s off the podium, while he was in pursuit of the lead group in Race 2 before falling. 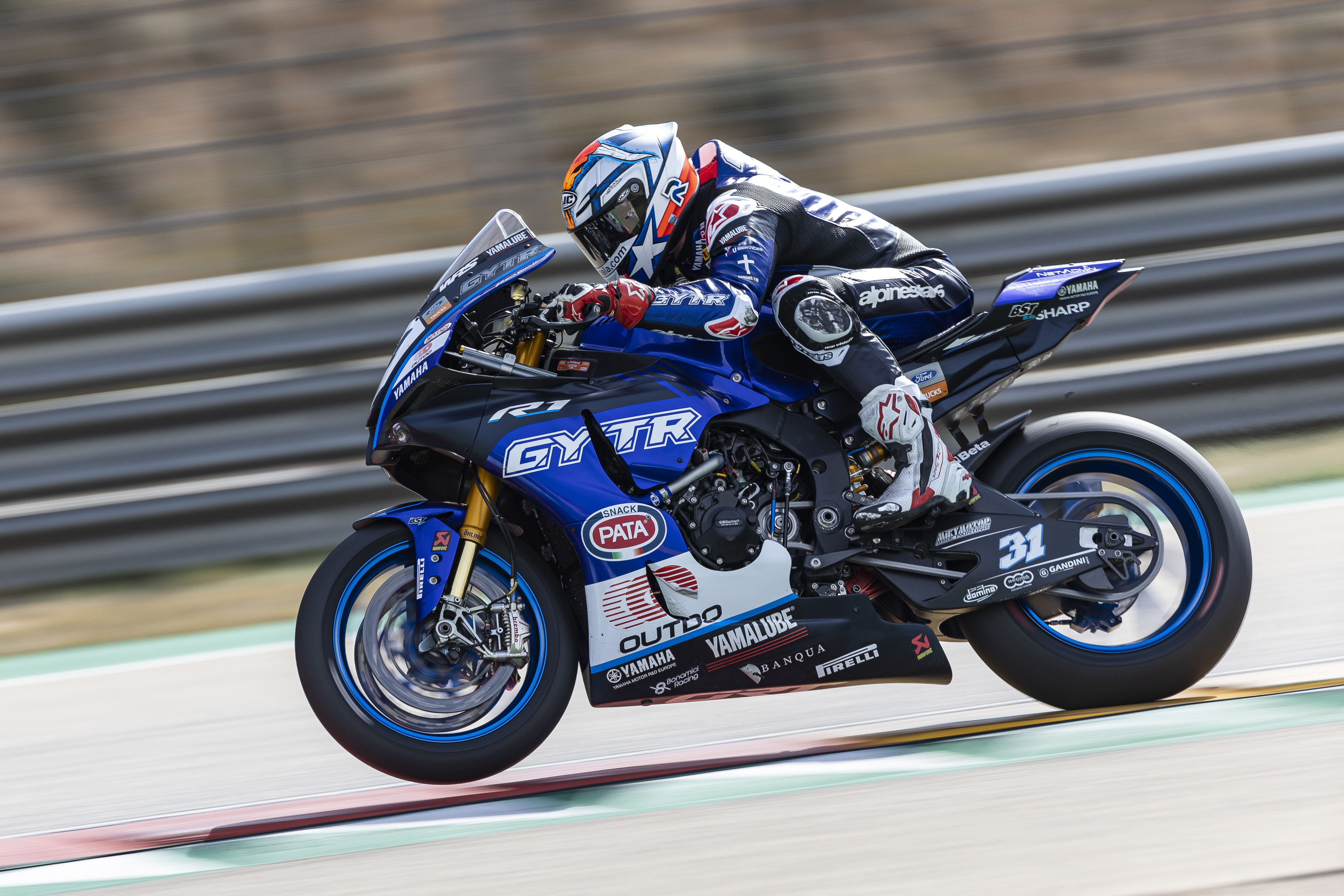 In the GYTR GRT Yamaha WorldSBK Team camp, Garrett Gerloff had to recover from an unrepresentative qualifying to finish ninth in Race 1 & 2, whereas teammate Kohta Nozane was unable to score points, crashing from inside the top 15 in Sunday’s feature-length contest.

“A good start for another promising season in WorldSBK. Toprak has been amazing, three podiums, and it’s nice to see his motivation and the way he was riding the bike. He improved race-by-race, and it was good to see how close he was to our competitors at this track. For Andrea, after his rookie season he is now looking for the next step. His approach for the weekend was the right one. He scored great results in the first two races, but unfortunately, he had a small crash in the third race, when he had the chance of fighting in the front group.

“Garrett has had quite an impressive pre-season, he has been always very quick, and the race result does not reflect his potential. His races were compromised by his starting position. He showed great pace in the second half of the races, so I’m confident that with a better qualifying he would have been able to fight for a good result. It wasn't the best start to the season for Kohta. He was expecting more this year, but we saw an improvement across the weekend, and he was unlucky not to score points in Race 2 because of his crash. We are confident though that in Assen he will be able to show his potential.” In the opening Yamaha R3 bLU cRU European Cup race of 2022, fans in the grandstands were treated to a pair of exciting races. Spain’s Yeray Ruiz held off Brazil’s Enzo Valentim in a head-to-head fight to win on his debut, while Devis Bergamini emerged on top in the 11-way scrap for victory in Race 2.

“The level of competition in the second year of the Yamaha R3 bLU cRU European Cup has already proven to be very impressive, and it has been great to see how successfully this series has grown, having riders from 12 different countries and with nine of them coming from outside of Europe. For sure it is an important racing development program for Yamaha, which has already brought results as we saw with our R3 Cup graduates in the WorldSSP300 races this weekend. We had two fantastic races, with barely a second separating the top 11 in Race 1. A special congratulations to the podium finishers, having two Brazilians up there shows the level of the program in that region. Yeray and Devis rode very well, it’s a promising start to what should be an amazing season. I’d like to thank the organisers as well, who’ve done a great job to ensure everything is going in the right direction.”

Winning Start to New Era of WorldSSP for Yamaha

The new generation of WorldSSP also got underway in Aragón, with new manufacturers joining the championship in 2022. In the races, pole-sitter and Evan Bros Yamaha WorldSSP Supported Team rookie Lorenzo Baldassarri came out on top of the thrilling dual with Ten Kate Yamaha WorldSSP Supported Team’s Dominique Aegerter on Saturday, while the defending champion was able to edge out the Italian for the win in another riveting second race on Sunday.

“We can expect another good season for Yamaha in this championship. We’re glad to see that the Yamaha R6 has confirmed its competitiveness in the hands of our experienced teams in this new era of WorldSSP. We’ve seen two very fast races and a tight competition between the world champion Dominique, who confirmed he will once again be in the fight, and the newcomer Lorenzo. We congratulate both riders and their teams on their victories. I’m sure that we will have more teams and riders join the fight for the win in the next races, including GMT94 Yamaha who endured a difficult weekend this time out.” “We started in the right way in WorldSSP300, and it’s really nice to see that the R3 is going to be competitive once again. Congratulations to Marc, the 2017 WorldSSP300 champion, for sure it’s a great start for him, but also it’s been a super weekend for Alvaro, who showed maturity and impressed in both races. They lead the championship, of course it’s only the first round, but we’re sure they’ll be among the main protagonists this year. It has also been amazing to see how quickly Iker has adapted to the WorldSSP300 championship. He was fighting for the podium in Race 1, and although he fell in Race 2, I’m glad to see that the R3 Cup has been the right platform to develop him and the other riders.”