The Pata Yamaha WorldSBK and GRT Yamaha Supported WorldSBK Teams concluded a positive preseason at the two-day official test in Phillip Island on Tuesday. Both are now ready for the opening round of the 2019 FIM Superbike World Championship, which takes place this weekend at the same venue. The two teams have enjoyed a solid build-up to the new season, with productive private tests at Jerez and Portimão followed by further progress during the final, official WorldSBK test in Phillip Island. It was Marco Melandri who led the way for Yamaha in Australia, with his time of 1'30.760 on the second day securing him fifth position on the timesheet. Michael van der Mark ended the two-day test in seventh position, one place ahead of Sandro Cortese in eighth, while Alex Lowes closed out the test in ninth position.

It was Lowes who made the early running at Phillip Island, continuing the preseason form that saw him finish second on the timesheet at both private tests in Jerez and Portimão. The Briton ended the opening day second once again with a time of 1’31.146.

Unfortunately, Lowes was unable to build on such a strong start on the second day, following a high-speed crash at turn one that he was lucky to walk away from uninjured. Despite the crash, Lowes is confident that he can reap the rewards of a successful preseason test program with a strong showing this weekend’s races in Australia, as he looks to achieve his goal of finishing top three in the championship standings at season’s end.

Pata Yamaha’s Van der Mark is also keen to get his 2019 WorldSBK campaign off to a flying start with a strong performance in Australia this weekend. The 26-year-old was a regular frontrunner in 2018, taking two race wins and 10 podiums on his way to finishing third in the championship standings and, after a solid winter test program, he heads into the new season determined to repeat, or even improve upon, this success.GRT Yamaha’s Melandri declared himself satisfied with the progress made during the two days of testing at Phillip Island, which the Italian finished as the fastest of the four Yamaha riders. As a result, Melandri goes into the opening round of the 2019 season confident he can put in a strong performance, on a track at which he dominated to win both races just one year ago.

Cortese is looking forward to making his WorldSBK race debut in Phillip Island this weekend, after impressing during preseason testing. The reigning WorldSSP Champion was quick to adapt to the demands of the Yamaha YZF-R1 he’ll campaign in GRT Yamaha colours this season but, while he is confident that he and the team are fully prepared for the first race of the season, he admits to still being a little nervous about making his premier class debut in Australia.

The opening round of the 2019 WorldSBK season gets underway at 10.30 local time on Friday 22nd February with Free Practice. On Sunday morning the riders will contest the first ever Tissot Superpole Race, a 10-lap sprint to decide the grid for Sunday afternoon’s WorldSBK Race 2.

The feeling is quite good going into the first race, after the test here at Phillip Island. It's always a strange test here, as it's fairly easy to do one fast lap, but it's the last half of the race that is critical at this track, so we spent a lot of time at the test working to improve tyre endurance, trying not to work the rear tyre in particular too hard, with positive results. The second day in Australia was interrupted by what was a bit of a strange crash at turn one, which I was lucky to walk away from but, overall, preseason testing has gone really well. There are still a couple of areas in which we can improve but we're in a much better position going into this weekend than our lap times from the second test day would indicate. Now we just need to keep working, especially with the tyres, if we are to start the season with good results here in Australia. I was quite happy with the test here in Phillip Island, especially as we were able to make a step forward and improve quite a lot on the second day after trying a lot of things on the bike. The main thing for us was to work on a strategy to save the rear tyre because the races here are quite long and this track is particularly hard on the rear. It's a big challenge, but one that the electronics can help us with considerably. We are ready for the weekend ahead and I'm looking forward to racing again after a winter of testing. Testing is one thing but racing is always different and I can't wait to line up on the grid for the first race of the 2019 season here in Phillip Island. 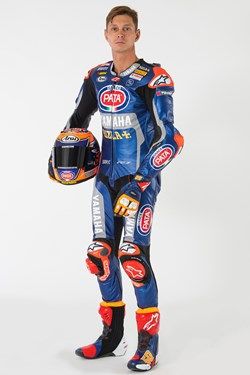 The final preseason test was pretty good and, finally, we are finding our way to follow with the set up of the bike. Now we have to put all the pieces of the puzzle together to find the best solution to allow us to be fast at the weekend, working on the fine tuning for the race pace. I'm confident for the race; it's not going to be easy, but we are growing up with the team day by day and I'm both happy and confident going into the first race weekend of the new season.

After a successful program of testing over the winter I can't wait to get the season started with the first race in Phillip Island this weekend. It's not just the first race of the season but also my first WorldSBK race aboard the Yamaha YZF-R1, so it's even more special. I'm quite curious about it, but also a little nervous if I'm honest. We've done everything we possibly could to prepare during testing, to improve the bike and to improve my feeling with it, so I'm confident that we are ready to go into the new season. Let's see what happens this weekend.