Aegerter and Odendaal Share Spoils in First WorldSSP Weekend at Most Aegerter and Odendaal Share Spoils in First WorldSSP Weekend at Most

Heading into the weekend off the back of five consecutive victories and two pole positions, Aegerter was on the pace again in qualifying, going second fastest. The Swiss rider dropped back initially in Race 1, but was fighting his way towards the podium before the red flag ended his charge and he was classified in fourth.

In Race 2, the championship leader hit the front heading into Turn 1 and from there was able to control the pace, using his experience to hold off the charging Manuel Gonzalez for the entire 19 laps. In the final stages, Aegerter pulled a gap over the field and claimed his sixth win of the season.

Title rival Odendaal could only manage seventh in the Superpole, but by the fourth lap of Race 1, the South African had hit the front. The Evan Bros Yamaha rider endured some pressure from behind, but took the victory after the red flag prematurely ended Saturday’s race.

In the second race, Odendaal switched to the harder compound rear tyre and struggled in the early stages, having to use the escape road at Turn 1 on lap three dropping him to ninth. The 28-year-old gained confidence and fought back through, passing several riders on his way to second, his seventh podium of the season.

After becoming the youngest-ever WorldSSP pole-sitter, ParkinGO Yamaha’s Gonzalez had to come back from fourth in the first race, and found himself in second before the red flag.

With his maiden podium behind him, the 19-year-old Spaniard was hoping to go one better in Race 2, but was forced to cut the first chicane on the opening lap and dropped to seventh. Gonzalez set a series of fast laps to run second on lap five and was harrying Aegerter for the lead before a small mistake let Odendaal through in the closing stages, and he crossed the line in third.

From fifth on the grid, bLU cRU graduate Luca Bernardi was amongst the lead battle in both races, finishing sixth on Saturday and fifth on Sunday, having been fighting Aegerter and Gonzalez in the opening laps of Race 2.

Riding for the Biblion Motoxracing Yamaha WorldSSP Supported Team, Federico Caricasulo made his way from 12th on the grid to finish fifth in the first race. The Italian was just as impressive in the second, making up eight places at Turn 1 to run fourth early on. The 25-year-old battled with Bernardi and GMT94 Yamaha WorldSSP Supported Team’s Valentin Debise throughout, eventually taking sixth at the finish.

Debise, who was wildcarding for the GMT94 Yamaha team this weekend, bounced back from his Race 1 crash to finish a strong seventh on Sunday, with his fastest lap on par with the front runners. Teammate Jules Cluzel was in the lead battle in Race 1, but eventually finished seventh, while he was taken out at Turn 1 on lap two on Sunday after being hit from behind.

Ten Kate Yamaha’s Galang Hendra Pratama had climbed from 23rd to finish 14th in Race 1, but a shoulder injury sustained in the Warm Up saw him sit out the second race.

Overall a good weekend, first and second, but I wanted the number one today. I was a little bit nervous on the grid because we decided to go for the hard option rear tyre, which we hadn’t ridden all weekend and wasn’t sure if I could find a good rhythm. I made some mistakes early in the race which dropped me to ninth, and that wasn’t great because I had to catch up a lot. I couldn’t quite get Dominique at the end, but a really positive weekend and I’m looking forward to the next one.

Winning today gave us some important points for the championship. We improved race-by-race and it’s nice to ride in front of the Czech fans and to give the hard-working Ten Kate Yamaha team a win after yesterday’s unlucky result. I was disappointed they gave the red flag a bit late, and that I could not really fight until the end to see the chequered flag. Going home with the championship lead is great, I have some busy weeks ahead. I’m looking forward to riding the Yamaha R6 again at Navarra, we tested there and it should be an interesting weekend.

This weekend was really good because we worked a lot on the bike and I like this track a lot for my riding style. The second race was difficult for me, because I had to miss the first chicane and dropped many places. I managed to overtake a lot of riders on my way back into second, but the race pace was really fast and it was a bit hotter than yesterday. I have to be happy with two podiums but I wish I could have achieved that win. Hopefully I will get another chance at Navarra though, I won there in the Spanish Moto3 Championship, so it could be another good weekend for me there. 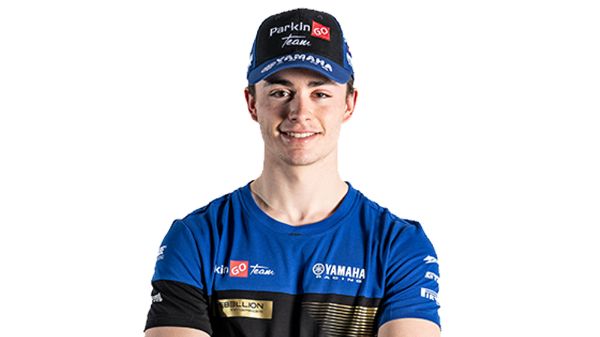