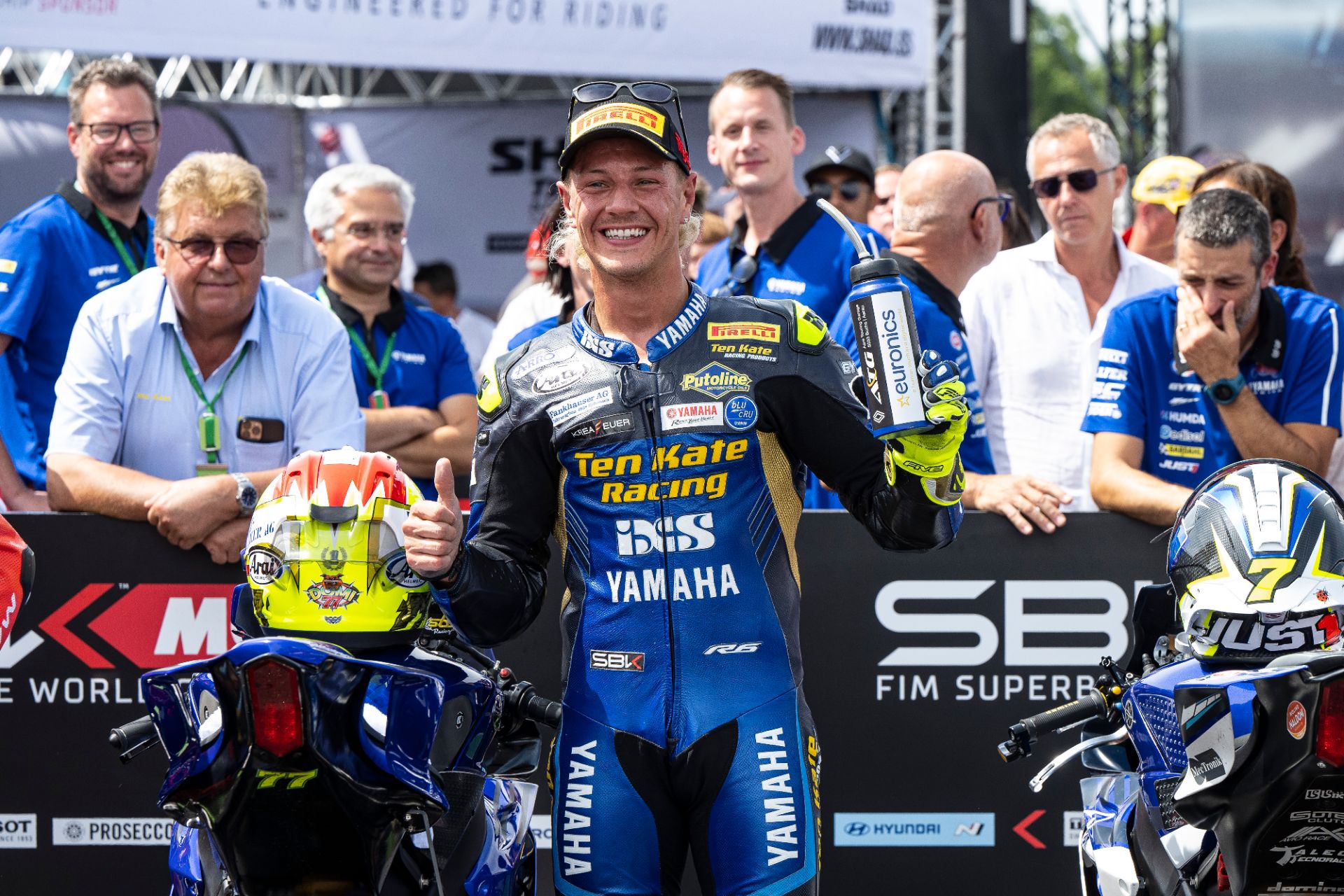 Starting from pole position, the Swiss rider made the perfect launch, holding position into Redgate. Slipping behind the Ducati of Nicolo Bulega at the Melbourne Loop, the defending champion settled into a rhythm, saving his tyre for a late charge at the sweltering British circuit.

However, the 31-year-old’s charge was briefly halted on lap seven as Federico Caricassulo and Evan Bros.WorldSSP Yamaha Team’s Lorenzo Baldassarri both passed Aegerter at the Melbourne Loop, demoting the Swiss rider to fourth.

With Baldassarri getting through on Caricasulo, the Ten Kate Yamaha rider wasted no time, clearing the Italian on lap 11. With the Yamahas catching Bulega at the front, the pair held position until former Moto2 rider Baldassarri took the lead with a neat pass at the Old Hairpin. Eager to not let his fellow Yamaha rider break away, the Aegerter flew in to second, passing Bulega at the Melbourne Loop.

Aegerter was keen to lead, passing Baldassarri a lap later. From there, he never looked back, pushing to the limit to secure his ninth consecutive FIM Supersport World Championship victory, extending his series lead to 64 points.

Andy Verdoia was flying the flag solo for the GMT 94 Yamaha team after Jules Cluzel was declared unfit following his race one crash. The French rider pushed hard to secure a top ten finish in ninth place.

Unai Orradre was determined to put yesterday’s difficult race one behind him to secure a strong result on Sunday. A positive start saw the Spanish youngster battling inside the top ten before slipping back to 12th in the closing stages, where he ultimately finished the 19-lap race.

After five rounds of the season, Yamaha lead the manufacturer championship with a 104 point advantage having scored 250 points in the opening ten races.

The Supersport World Championship paddock will enjoy a short break before returning to action in the Czech Republic for round six at Most across the weekend of 30-31st July.

“It’s nice to win nine races in a row, especially today because the race was really exciting. We had a great battle at the front, but it was interesting to battle the Ducati. I could see where we were faster, and just waited for the opportunity to pass. In the end we got to the front and took the victory. Nine wins in a row isn’t easy because every track is different, with different conditions and everything needs to be perfect to win. The team have worked hard throughout the winter to make the bike as good as it can be and I’m happy I can repay them and our sponsors for their hard work like I have.

“I’m looking forward to Most, our goal is to extend our championship lead and have a clean weekend. If we add more wins to the tally, then that’s a bonus!”

“It wasn’t an easy race, but I enjoyed it a lot. I was giving my maximum and it showed because we were fast, but Dominique Aegerter just had a bit more than us. I hoped that once I got ahead of Bulega, Aegerter would lose a bit more time than he did, but he was really quick to pass him and caught me. When he got ahead, the last two laps were on the limit, so fast, but I’m happy to take second and another podium. Thanks to the team, to Yamaha, and we’ll try to take a step to secure a good result in Most ahead of the summer break.”

“It was a good weekend in general because I learned a lot at this new circuit. I really enjoyed riding at Donington Park and pleased I was able to get a good result on Sunday. Unfortunately, on Saturday I crashed which gave me some pain in my shoulder, but today we made a good step in the warm up which gave me confidence for the race. We were able to fight for the top ten, finishing 12th in the end which is my best result of the season, so it sets us up for even better in Most.” 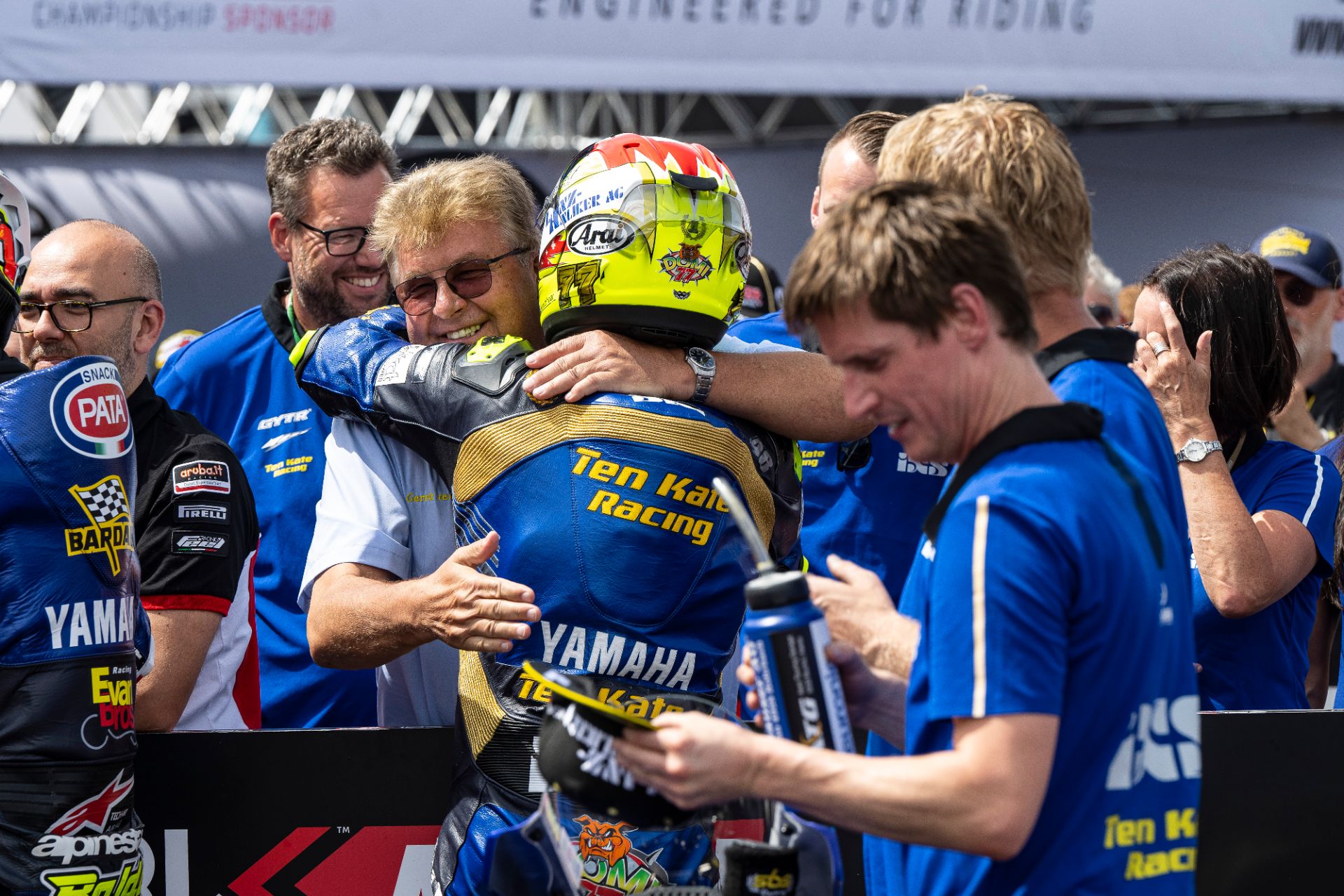