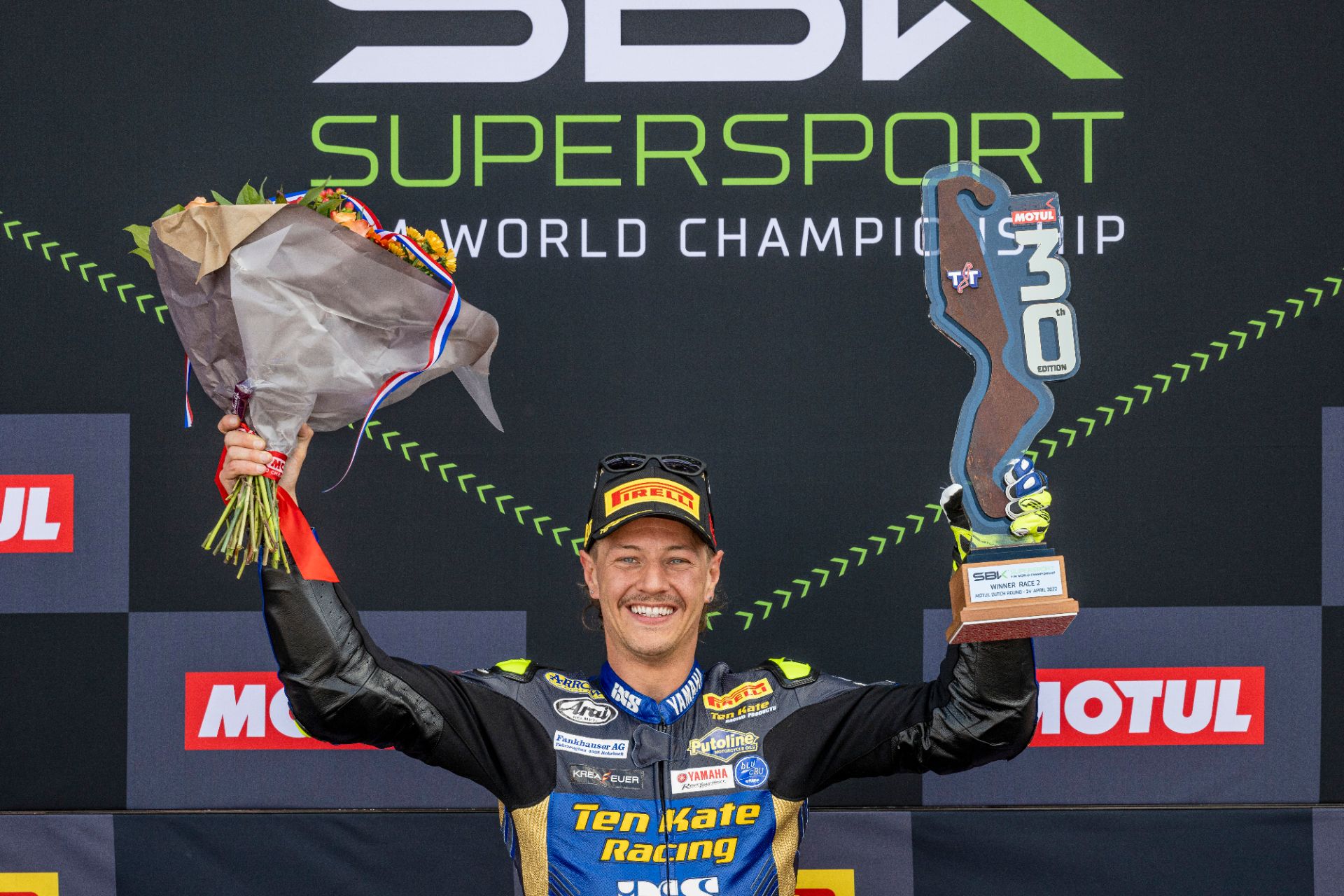 Dominique Aegerter secured a perfect Dutch double for his Ten Kate Yamaha team this weekend, storming to his third victory of the 2022 FIM Supersport World Championship.

Dominique Aegerter put on a dominant display this afternoon, conquering the TT Circuit Assen for his third win of the season. The Swiss rider overcame the challenge of Evan Bros Yamaha’s Lorenzo Baldassarri, who secured Yamaha’s fourth one-two finish in as many races.

Launching from pole position, Aegerter got off to a strong start but found himself pushed wide at turn one, dropping behind a fast-starting Baldassarri in fourth. In the jostle for position through the opening corners, Jules Cluzel and Saturday’s podium finisher Glenn van Straalen ran into trouble, crashing out of the race on the opening lap.

Settling into a rhythm, it was time for the Yamahas to start their attack. With Federico Caricasulo in his sights, the Italian was first to pounce, clearing the Ducati rider at turn 14 before being swiftly followed by Aegerter at the Geert Timmer Chicane.

As the race went on, the Yamahas battled hard, swapping positions in the fight for second; but it was Baldassarri who made the first move for the lead, passing Öncü with a brave turn nine manoeuvre. The former Moto2 star’s lead was short-lived as Aegerter worked his way through Öncü before snatching the lead away from Baldassarri on lap eight.

With pressure mounting from behind, the number 7 Yamaha fell behind countryman Nicolo Bulega. Determined to secure 20 points after his non-score on Saturday, he relentlessly fought back, re-claiming second at the final chicane and began to open a gap.

With Aegerter out front, the Swiss rider never looked back, taking victory by a dominant 2.6 seconds, extending his championship advantage over second place finisher Baldassarri to 30 points.

An impressive ride from Kyle Smith saw the Briton in the fight for the top five. Unable to mount the attack he was hoping for, he slipped back to ninth by the end of the race.

Marcel Brenner narrowly missed out on a top ten finish in 12th ahead of Leonardo Taccini and double points finisher Unai Orradre, who finished in 13th and 14th across the weekend’s two races respectively. Meanwhile, Patrick Hobelsberger missed out on points in 16th.

Taking his points total to 95 from a possible 100, Dominique Aegerter leaves the Netherlands 30 points clear of rival Baldassarri, with Glenn van Straalen still in the fight in fourth. Jules Cluzel lies ninth with 23 points.

Patrick Hobelsberger sits 12th with Taccini and Smith in 16th and 17th. MS Racing rookie, Unai Orradre has five points to his name and heads to round three of the series in 19th place, just ahead of Marcel Brenner.

The series will take a short break before returning to action in Portugal, taking on the Circuito Estoril across the 20th-22nd May.

“It’s been the perfect weekend here in Assen, two home victories for the Ten Kate Team who are based 30 minutes from the track! Pole position with a new lap record and two wins is the maximum we could have asked for. We’ve had a great start to the year, 95 points out of a possible 100. I like this track; the weather has been perfect even if it was a bit windy. The team have done an incredible job to give me a bike to work in the conditions, so thank you to them, all the sponsors and the fans who have given me extra motivation this weekend. I can’t wait to return in Estoril.”

“After the crash on Saturday, I needed a good race today. Yesterday I felt good with the bike and we started well, but at turn ten I touched some oil and lost the front after just three laps. It was not my mistake which made it difficult to accept, but it motivated me for today.

“The race with Domi was interesting, we were pushing hard but I lost touch with him when Bulega passed me. By the time I had got back ahead, the gap was too big, and I didn’t want to take too many risks, so I decided to take the 20 points for finishing second. Thank you to the team who have done a great job to give me a great bike today after getting no data on Saturday!”

“I’m super happy with the work this weekend in Assen. It’s not my favourite track but working with the team, we made progress. We had a good Superpole which gave me a chance to fight for the top ten with a good start. Finishing 13th and 14th allowed me to learn a lot because I was fighting with some fast riders, so I hope I can take what I’ve learned here to Estoril and fight for the points again.” 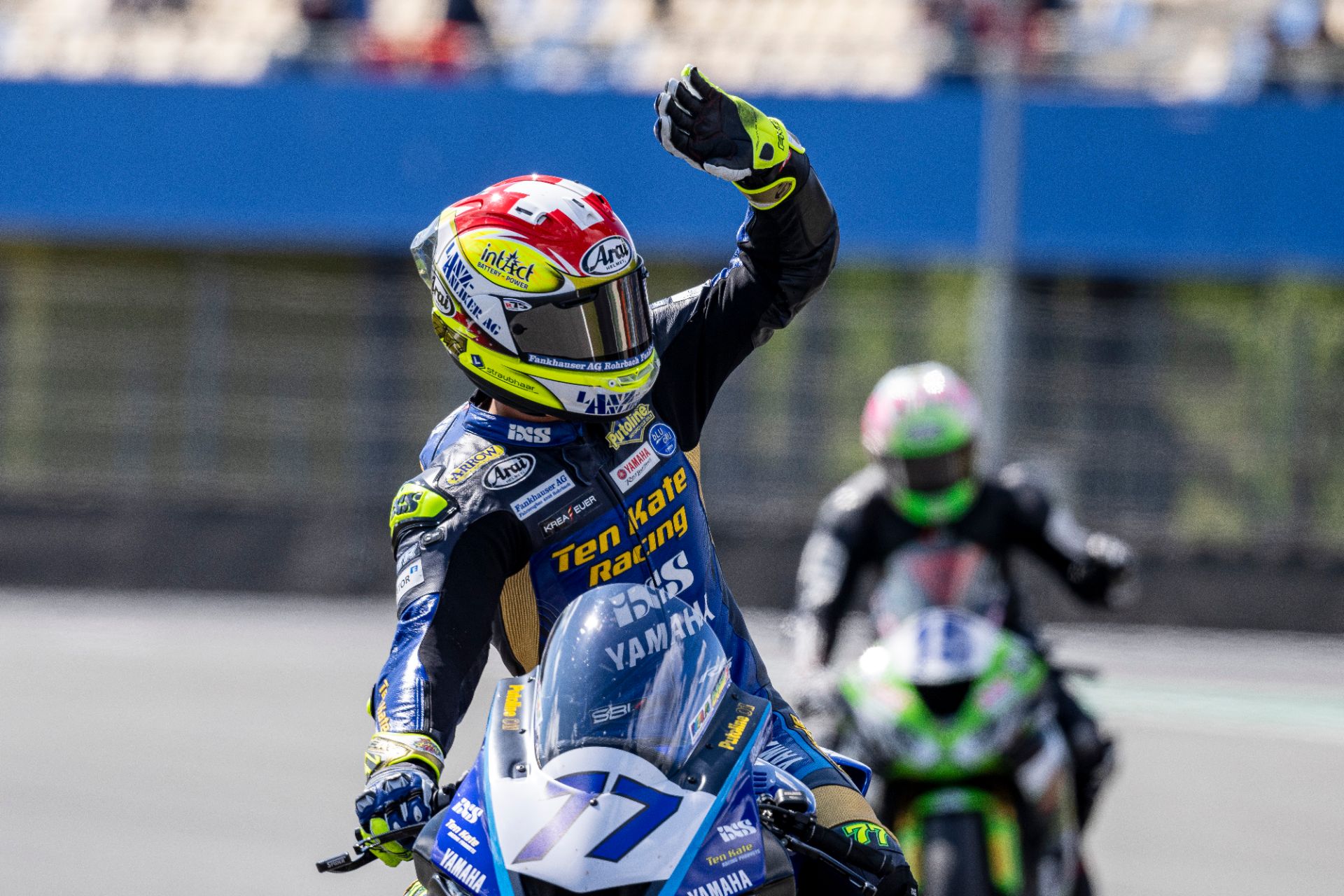