Yamaha Motor Europe is pleased to announce an extension to their bLU cRU program, with the addition of a team in the FIM Supersport World Championship dedicated to the further development of young riders. For the 2020 season the bLU cRU Yamaha WorldSSP Team will field 17-year-old Andy Verdoïa and 20-year-old Galang Hendra Pratama, both graduates of the bLU cRU program in WorldSSP300, aboard Yamaha's championship-winning YZF-R6 in the hotly contested WorldSSP series.

The addition of the bLU cRU Yamaha WorldSSP Team for 2020 means that Yamaha's rider development program now extends all the way from grass roots racing at national level to the premier FIM Superbike World Championship. The structure is unique in road racing and is designed not only to identify the world champions of the future, but also to develop their skills and allow them to realise their full potential, all within Yamaha's racing family.

The bLU cRU Yamaha WorldSSP Team will be managed by MS Racing, a team that has been an integral part of Yamaha's bLU cRU program in WorldSSP300 since its inception in 2017.

Galang Hendra's first appearance on the world stage came in 2017 when he contested two rounds of the WorldSSP300 series as a wild card rider. A technical issue forced his retirement from the first race in Portimão, but the young Indonesian rider stunned the paddock with a race win in Jerez next time out. The following season the Indonesian rider contested his first full season in WorldSSP300 as part of Yamaha's bLU cRU project, picking up another race win in Brno on his way to finishing tenth in the championship.

Galang Hendra improved his race craft and consistency to finish the 2019 FIM Supersport 300 World Championship seventh in the standings but was unfortunate to miss out on adding to his podium tally by the narrowest of margins on more than one occasion during the year.

Verdoïa made an immediate impact on his full-time debut in WorldSSP300 with the bLU cRU in 2019, impressing from the start with both his speed and consistency. The 17-year-old French rider made his first appearance on the podium in Misano, where he finished third, but it was his performance in the following round at Donington Park that marked him out as a potential star of the future.

The French youngster started the race from the very back of the grid but passed 26 riders on the opening lap and was in contact with the leaders just five laps into the race. Incredibly, at half race distance, he swept into the race lead and, while the Verdoïa was narrowly beaten to the win by bLU cRU teammate Kevin Sabatucci, his ride to second place was undoubtedly the standout performance of the race. Verdoïa went on to finish the season fourth and the highest placed Yamaha rider in the championship standings.

The two bLU cRU riders will start their transition to WorldSSP and the Yamaha YZF-R6 at the first preseason test of 2020 in Jerez, which gets underway on 22nd January.

"I am very pleased that we are finally able to announce the formation of the bLU cRU Yamaha WorldSSP Team for the 2020 season, as it completes the path within our racing pyramid from national level competition to the premier WorldSBK class. Initially we looked at placing Galang Hendra and Andy in established WorldSSP teams, but we've seen in WorldSSP300 this year that our bLU cRU riders learn from each other and gain confidence from sharing their experiences. This would have been difficult for them to do if we'd separated them for the 2020 season but, more importantly, by placing them together in a team where development rather than results is the priority, we are making clear our intentions for the bLU cRU project and the team's role within that structure. I think in the MS Racing squad we have found the perfect partner for this project. They have been an integral part of our bLU cRU project in WorldSSP300 and, as we've seen with both Andy Verdoïa and Beatriz Neila this year, they have a talent for extracting the best from talented but inexperienced riders. This will be a crucial skill in 2020, as Galang Hendra and Andy adapt to the Yamaha YZF-R6 WorldSSP bike, which is both heavier and more powerful than the Yamaha YZF-R3 WorldSSP300 they're used to. But this is not the only transition they need to make; in 2020 they will be racing against vastly more experienced rivals so taking their race craft to allow the next level will also be of paramount importance.  I have every confidence that, in Galang Hendra and Andy we have two riders who have the talent to be competitive in WorldSSP in the future and now we must focus all our efforts on helping them to realise their full potential. It will be a challenge, but one that we at Yamaha are definitely looking forward to, and I think the same is true of the two riders!" 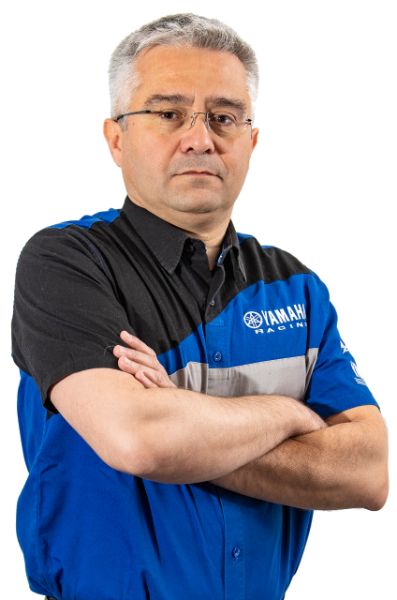