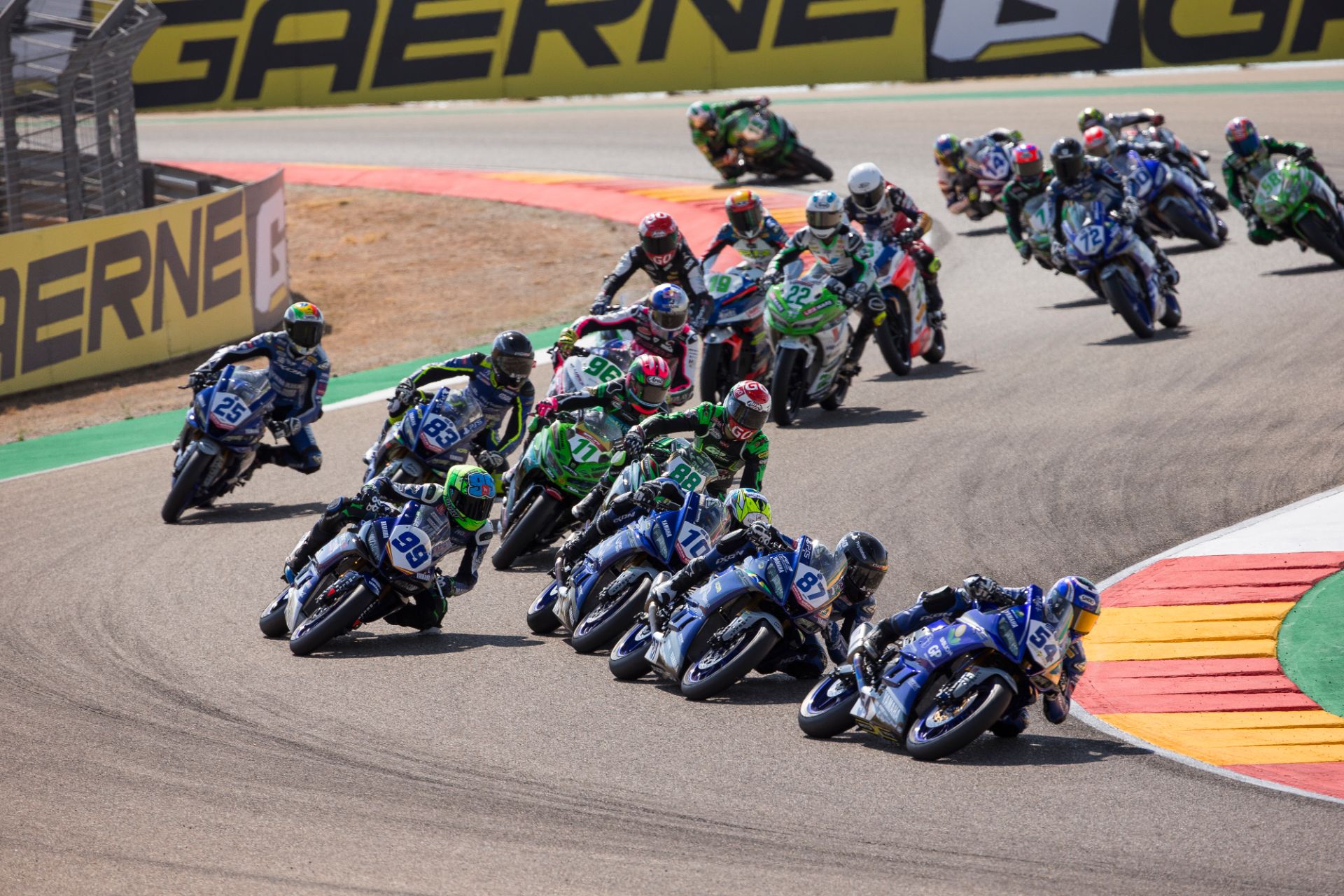 For the Teruel round, the second part of MotorLand Aragón’s double-header, the bLU cRU riders were looking to improve on their performances from the weekend prior, and on Friday they were all comfortably inside the top 30.

By the end of FP3, Sofuoğlu, teammate Alvaro Diaz, and Yamaha MS Racing WorldSSP300 Supported Team’s Unai Orradre, Alan Kroh and Ton Kawakami, had all done enough to automatically qualify for the Tissot Superpole, which sets the grids for both 10-lap races.

In Saturday’s qualifier, Turkish youngster Sofuoğlu, who had led the bLU cRU contingent on combined times in practice, went a step further and broke the lap record on his R3 GYTR to claim pole position by 0.659s. Orradre and Kroh put it onto the fifth row in 13th and 15th respectively, with their Yamaha MS Racing teammate Ton Kawakami starting just behind in 16th. Diaz struggled to reach his full potential in the Superpole, having gone ninth overall across the free practice sessions, and would line-up 27th on the grid.

With most riders having a full weekend’s experience already, the field was tightly packed in Race 1, with 16-year-old Spanish youngster Orradre joining Sofuoğlu in the lead battle, who was swapping places among the top five throughout the race. On the final lap he made his bid for the win, just missing out by 0.042s on the line, but the race-winning Kawasaki was found to be non-compliant, seeing the 17-year-old promoted to victory, his second of the season.

Orradre made up eight places to take another top-five finish, scoring more important championship points, as 16-year-old rookie Kroh also recorded his third consecutive points finish in a personal best 10th. Kawakami and Diaz also fought in the lead battle throughout, which covered most of the top 20, finishing 13th and 14th respectively.

A promising Warm Up saw Diaz go fifth quickest, with Kawakami, Kroh and Orradre all inside the top 12, as Sofuoğlu suffered a setback with a fall early on and didn’t set a lap time. Despite this, the Jerez race-winner was once again in the lead battle from pole position, but was unable to stay in the slipstream of first and had to settle for a fight over second. He crossed the line in third to reignite his title bid, moving into the championship’s top three.

Spanish Junior Superbike champion Orradre once again moved forwards through the lead group and eventually finished in seventh, seeing him leave Aragón tied on points with Sofuoğlu. Kawakami initially crossed the line 16th, but a disqualification ahead saw him move up a place to continue his record of scoring points in every race he’s finished so far this year.

Kroh was unfortunate to lose out on another points finish, and was just over a tenth behind his Brazilian teammate in 17th, as Diaz was also left frustrated in traffic, rounding out the bLU cRU runners in 22nd.

I’m happy for the result this weekend, but in Race 1 I’d like to have taken the victory on track. Either way, it’s important for the championship to get these extra points and now we’re back within range of the leader. Third in the second race is also good and now I’m looking forward to Barcelona, which will be a new track for everyone and hopefully I can go well again there.

I’m really happy with the result this weekend. We scored important points for the championship and I’m still in the fight for the title. It was a really tough two races, but I enjoyed riding at this track - as I always do - and I’d like to thank Yamaha, the team and all my sponsors for the support.

I am very happy for making a step forward at Aragon last weekend and to be in the lead group of riders in both races. In the free practice I had a problem on Friday, but on Saturday I was able to improve a lot. In the first race I didn’t have a good start, but I was happy to be in the top 10 fight, taking my best result so far. I hope to go even better at Barcelona and maybe even push for a top five result.”

It was a difficult weekend overall because we started on the backfoot in FP1 with not the best set-up and couldn’t take part in FP2 because of a penalty. On Saturday, I still wasn’t entirely happy with the bike but we managed to improve it in Sunday morning’s Warm Up. It was still quite tough in the second race - I managed to get up to eighth but had some small contact and dropped back to 16th. We did get a point in the end and I hope to be back in the lead battle for Barcelona. Thanks to Yamaha and the team for all their work.

It was a hard weekend, but we made a lot of progress. The results weren’t what we wanted but I’m happy with the pace and I’m confident that we can take what we’ve learnt into Barcelona and fight for more points.

It was a great race weekend for our bLU cRU boys during this hot Teruel round. Our programme continues help improve results for Bahattin, Unai, Alan, Alvaro and Ton, who are always taking onboard are advice. It was a special second victory for Bahattin in Race 1 and an awesome podium in Race 2, he managed to put it all together and recover in the best possible way from a disappointing first weekend at Aragón. Unai’s performance was consistent and he continues to show one of the best riding styles in the class, while the points he scored will be vital for the championship. The rookies, Alan and Alvaro, are special and really fast, there are just a few more things for them to learn and they’ll be right at the front! Ton also had very good pace, but lacked consistency in the second race to score more points. He knows what areas to improve and I’m sure we will see him on top soon. bLU cRU staff continue to give the best support to all of them to help realise their dreams, and both Yamaha MS Racing and Biblion Motoxracing Yamaha did a great job in managing the R3 GYTR bikes, so we are really proud of everyone. We cannot wait for Barcelona where we hope to go even stronger.